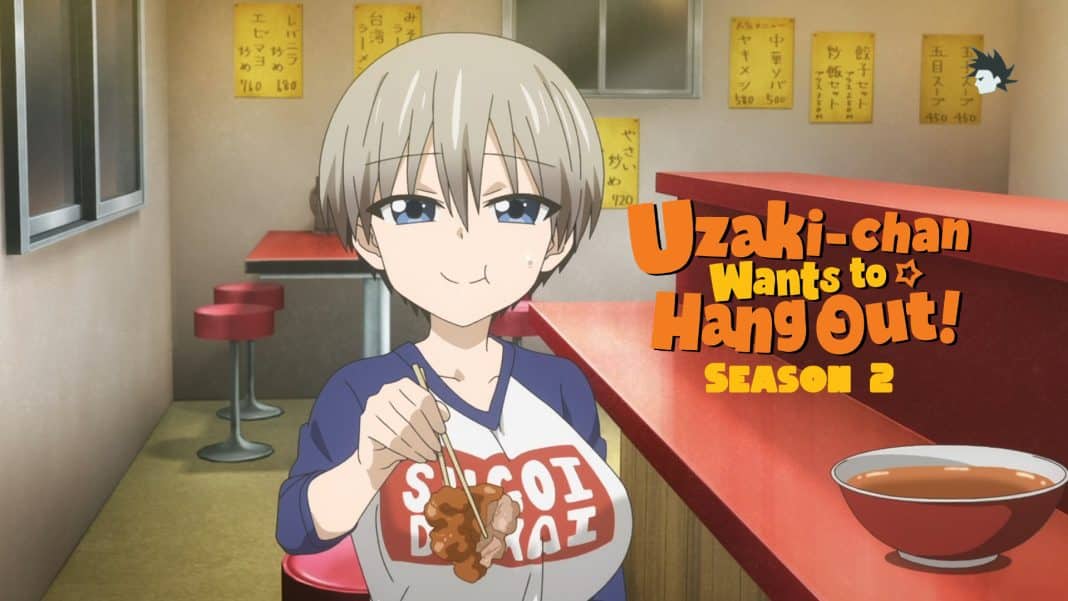 2020, as we all know, was a hellish year. We all were cooped up inside and needed all the entertainment that we could have. And at the time we had Boruto in the works, Kaguya-Sama and Kuroko all going strong.

But like a very figurative bomb, Uzaki Chan Wants to Hang Out was dropped! The anime, which was released on July 2020, saw a massive fan following because of the breath of fresh air it brought into the romantic comedy genre. Fans quickly brewed, and the series took on a fandom of its own.

Uzaki Chan: The Story So Far

The genre, as it was, only had very cookie-cutter characters in the past, headstrong individuals who fought each other and then fell in love, but this one showed a little bit of the other, more realistic side of the coin.

By the time Uzaki Chan season 1 was released, the original manga illustrated by Taka was already collected in several volumes, since early 2017. It was licensed by Seven Seas Entertainment for distribution in North America.

The anime version of the manga was produced by ENGI, and aired on AT-X from July to September 2020.

Slowly discovering herself to be falling in love with him, Uzaki doesn’t want to accept her feelings as she merely did this as a humanitarian effort, because she cared and didn’t want him to be alone.

Similarly, Shinichi just wanted to be left alone, and initially found Uzaki to be a bother, but found himself being drawn to her eventually.

This tug of love continued, and Season 1 ended on a high note, with Uzaki and Shinichi spending more time together and realizing that they need each other’s company.

The other quirky cast members include Ami Asai, a senior to both the characters, who wants to see the relationship progress further.

All the while, The Master, the owner of a local cafe, is also rather amusingly interested in Uzaki and Shinichi’s relationship progressing.

This caught the attention of a wider anime fanbase than the cult following that the series had already garnered, which shot it into the mainstream.

And now, we arrive at the present.

It did well with critics too, scoring an overall rating of 3.7 out of 5 on AnimePlanet, and 7.01/10 on MyAnimeList.

How to follow Uzaki Chan Wants To Hang Out Season 2

If you are an avid reader of manga, the manga version of Uzaki Chan has a total of 84 chapters published as of the date of this article, and the first season of the anime has covered around 34 chapters so far.

It is assumed that there is potentially enough material for the showrunners to make multiple seasons out of it, so you can rest assured with your investment in this anime.

Uzaki Chan season 2 was hotly anticipated as the anime had already completed a season and the sequel was announced shortly after the final episode had aired.

The announcement for the renewal was quirky, to say the least. It happened with a tweet from the official Twitter handle for the show, featuring a guy in a cat costume talking to the MCs’ voice actors, Naomi Azora and Kenji Akabane.

When is Uzaki Chan Season 2 Coming Out?

As of the 1st of October this year, the 1st episode of the 2nd season has been released, with Kazuya Miura as the director.

Manabu Kurihara is the illustrator tasked with character design, while Aoshima Takashi is writing the script.

It takes off right where we left off, with Hana and Shinichi getting to know each other’s personalities a little better.

Hana finally gets to terms with the fact that she must get Shinichi to confess his feelings for her, and a battle ensues between the whole cast of characters that wants to see them together at the end of the day.

Along for the ride are Uzaki’s younger sister, Yanagi, and more friends and family introduced in the first season.

Anime like Uzaki Chan Wants to Hang Out Season 2

If you are still waiting for the entire series to come out before binging it, maybe you’ll like some of these similar anime in the meanwhile –

I’ve tried not to add too many spoilers and it was pretty hard not to. All that’s left for you is to watch it and thank me later. Or maybe not!

Just like Monkey D. Luffy is to be the King of the Pirates, Roronoa Zoro has been destined for greatness since One Piece started. The...
Previous article
30 Best Mature Anime To Watch With Your Doors Locked!
Next article
Wise Man’s Grandchild Season 2: Release Date, Rumors & More