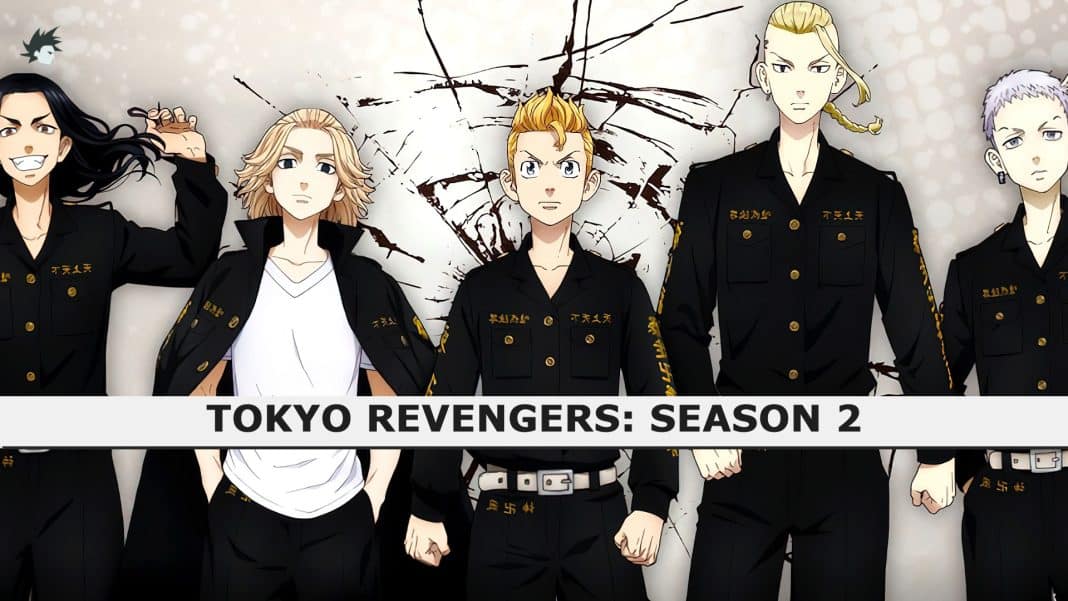 Tokyo Revengers brought back delinquent anime with realistic action, and it’s like the fans were starving for this combo.

A manga that was pretty much going under the radar saw its sales skyrocket after Tokyo Revengers aired the first anime in April 2021.

But it wasn’t just the manga that profited from the anime’s popularity. Fans were the real winners. The first season finished airing on 19 September 2021. And because fans loved it and it received critical acclaim, Tokyo Revengers Season 2 was greenlit within 3 months.

But now, we finally have more exciting news to share. So, read on if you want to know more about Tokyo Revengers’ new episodes, release date, trailer, and more.

And now, we finally have a Tokyo Revengers season 2 trailer and official title.

Although the title suggests that it might only follow the Black Dragons Arc, there are rumors about the Tenjiku Arc also becoming part of Season 2.

But before looking at what might happen, let’s revisit what has happened.

Tokyo Revengers Revisited – Everything About Season 1!

Tokyo Revengers is the story of Takemichi Hanagaki, a loser with time-leaping abilities. When a train accident transports him 12 years in the past to his high school days, Takemichi ends up joining a delinquent gang to try and change the future and save his friends from horrible fates.

Season 1 kicked off with Takemichi finding out about the death of Hinata Tachibana, his ex-girlfriend from middle school, who was killed by the Tokyo Manji Gang a.k.a. Toman.

The same day, someone pushes Takemichi in front of the train. But instead of dying, he wakes up 12 years in the past. There, he meets Naoto, Hinata’s younger brother, and the trigger for Takemichi to leap time.

Going back to the future, Takemichi meets Naoto – who is now a detective – and the two decide to work together to prevent Hinata’s death.

The plan is for Takemichi to join the Tokyo Manji Gang and prevent Mikey, President of Toman Tokyo Revengers, from turning evil to change Hinata’s dreadful fate.

Then we see Takemichi go face to face with Kiyomasa, a member of Toman who runs underground school fights. But after Takemichi stands up to him, Mikey beats up Kiyomasa and declares Takemichi as his new friend.

After that, Takemichi becomes a part of Toman, but things only get tougher for him.

He watches one of his friends commit suicide, Draken almost dies at the hands of the Moebius Gang, but Takemichi saves the day and returns to the present.

Naoto tells him that Hinata is alive because they successfully altered the future. However, they only delayed the inevitable as Akkun, Takemichi’s friend, kills Hinata once again on the orders of Kisaki Tetta, who has now become the acting president of Toman.

But, Takemichi decides to go back and become the President of Toman to save Hinata. This kicks off the Valhalla Arc where Keisuke Baji, one of the founding members betrays Toman and joins Valhalla.

Meanwhile, Kisaki Tetta becomes a Captain of the Tokyo Manji Gang. After a few flashbacks of how Toman was formed and how the members became friends, the big brawl between Toman and Valhalla begins and ends with Baji’s death.

In the end, Tokyo Manji Gang and Valhall merge, Hanma becomes a Captain, and Takemichi becomes the Captain of the first division.

And when Takemichi returns to the present, he finds himself among the highest ranks of Toman, Kisaki as the new leader, and no one knows where Mikey is.

And now onto Season 2.

As we said earlier, Tokyo Revengers Season 2 is definitely following the Christmas Showdown Arc, and there’s a chance that we might see the Tenjiku Arc as well.

So, here’s a little preview of the Christmas Showdown and Tenjiku Arcs from the manga. For anime-only fans, a spoiler alert is in effect.

Season 2 will pick up right from the cliffhanger with Chifuyu dead and Takemichi about to be shot by Kisaki Tetta. However, Kazutora saves Takemichi– and once again Takemichi heads back to the past.

This time, the Tokyo Manji Gang will face off against the Black Dragons.

Black Dragons is a 10th-generation gang founded by Mikey’s elder brother, Shinichiro Sano, who Kazutora killed while stealing a bike for Mikey. The gang is now run by the Shiba siblings (Shiba Taiju, Shiba Hakkai, and Shiba Yuzuha).

The Tenjiku Arc is the longest arc of the Tokyo Revengers manga, and it brings about some of the most gruesome plots of the whole series.

After the Christmas Showdown, Takemichi returns to the present only to find out Kisaki and the Tenjiku Gang have absorbed the Tokyo Manji Gang. So, Naoto and Takemichi start investigating Tenjiku. We also get introduced to Izana Kurokawa, the man capable of rivaling Mikey’s strength.

Apart from some new introductions, Tenjiku Arc kills off several main characters. However, some do come back after the efforts of Takemichi Hanagaki- the crybaby hero.

Where To Watch Tokyo Revengers Season 2?

Although Season 1 was available on several platforms, however, there’s been a change in plans for the Tokyo Revengers season 2 release.

Whether this means the series will make its way to Hulu or not is still unknown. But this does rule out Crunchyroll and Funimation. And there’s no way we’d get to see the 2nd season on YouTube.

When Did Tokyo Revengers Come Out?

Tokyo Revengers Season 1 came out on April 11, 2021. In Japan, the series aired on MBS, but it’s also available on Bilibili and the official Muse Asia Youtube channel.

As for the English dub version, it premiered on Crunchyroll on May 29, 2021.

2 months after the premiere of Tokyo Revengers Season 1, Warner Bros. Japan released the first live-action Tokyo Revengers movie on July 9, 2021. Although it’s far from perfect, it was a big hit in Japan.

So, the studio greenlit a 2nd and 3rd movie, both set to release in 2023. Part 2 will be titled Tokyo Revengers 2: Chi no Valentine-hen -Unmei- (Bloody Halloween Arc -Fate-) and will come out in the Golden Week of 2023.

And lastly, there’s the manga that kicked it all off.

The Tokyo Revengers manga runs in the Weekly Shonen Magazine. The manga debuted on March 1, 2017, and the final chapter was published on November 16, 2022.

How Many Episodes Of Tokyo Revengers Are There?

Depending on the manga chapters the studio decides to animate, Tokyo Revengers might have between 15-30 episodes.

There are rumors that the 2nd season will only have the Christmas Showdown Arc. If that happens, we might only get 10-15 episodes.

The Tokyo Revengers manga has concluded. The final volume (Volume 30) of the manga was published on November 17, 2022. And it finished the story with Chapter 278, titled Revengers.

2 manga spin-offs are running, but they are not canon. One is a parody titled Todai Revengers and the other is about the fan-favorite Keisuke Baji, titled Tokyo Revengers: Baji Keisuke Kara no Tegami.

Tokyo Revengers anime, on the other hand, is only getting started. The first season premiered in April and finished in September 2021. And now fans are gearing up for the 2nd season, which will premiere in January 2023.

After that, depending on what the studios adapt for Season 2, Tokyo Revengers have plenty of source material for more seasons.

How Many Seasons Of Tokyo Revengers Will There Be?

Tokyo Revengers Season 2 will most likely adapt the Black Dragons/Christmas Showdown Arc. That leaves the Tenjiku and the Final Arc as canon source material for the next anime seasons.

Since the Tenjiku Arc is lengthy (over 60 chapters), it might get divided into two parts. So, it’s fair to say that after the 2nd season, we should get at least 2 more seasons of Tokyo Revengers.

In a generation where we have zombie movies, zombie games, zombie board games, zombie comics, and zombie books, the undead has never been more...
Previous article
One Piece Zoro – From Pirate Hunter To Supernova!
Next article
JoJo Part 6 – JJBA: Stone Ocean’s 3rd Part Has A Release Date!