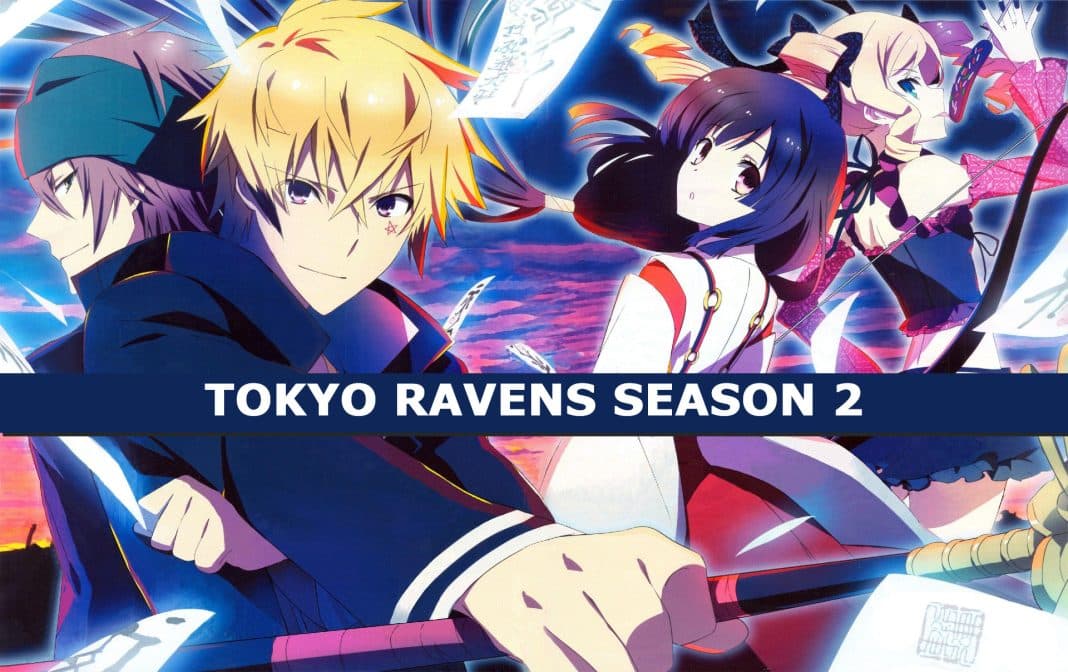 Tokyo Ravens was originally a light novel written by Kohei Azano and was published in 2010 in Japan. In the same year, it was converted into a manga and made its debut in the monthly Shounen Ace magazine.

Later in 2013, under the license of Funimation, Eight Bit Studio adapted the light novel into an anime and premiered the Tokyo Ravens Season 01 on October 9, 2013, with a total of 24 episodes.

Since then, fans have been waiting for its 2nd season and even after 8 years, there is still hope in the air. Many people have expressed doubt about whether or not the popular supernatural action series, known for its vibrant animation and emphasis on natural beauty, will return for a second season.

So let’s start digging into the details to see whether the Tokyo Ravens season 02 will be released!

What Is Tokyo Ravens All About?

When a ritual in Tokyo fails, demonic spirits invade the city, and it’s up to the Onmyoujis—seers, and masters of the spirit world—to rid it of the evil spirits.

However, Tsuchimikado Harutora, the protagonist, may have been born into an Omnyyoji household, but he is a rooted Onmyouji and is therefore incapable of perceiving spiritual energy.

He is unable to cast spells, so he goes about his normal life, having fun with his friends in the countryside, far from all this mayhem. But Once he finds out that an upcoming ritual ceremony can plunge Japan into chaos, he does anything he can to stop it.

How Well Did the First Season of Tokyo Ravens Perform?

The premiere of the first season of Tokyo Ravens aired on October 9, 2013, and it ran through March 26, 2013. While the first few episodes were somewhat slow, the show really began to pick up steam and win over fans around the middle.

And since the completion of the first season, fans of Tokyo Ravens have been excitedly anticipating the premiere of the series’ second season.  However, the stats and metrics of the anime are far different.

The disc sales for Tokyo Ravens occurred in the autumn of 2013, with an average volume of 2,247 units sold. As a rule of thumb, a new season of an anime should sell at least 4,000 units to be a successful one.

Apart from sales, there is no doubt that anime has a large and dedicated fan base, but still, that fan base is not yet large enough to support a new season.

Because we have discovered that only the anime with a hundred thousand fans typically have their contracts renewed for a new season; not the anime with 27K followers only.

When Tokyo Ravens Season 02 Will Be Coming Out?

Since the first season was so well received, many fans have been asking when the second one will air. Anime shows frequently adapt novels, manga, and other works that have already been written and published. That’s why it’s vital to have a large enough pool of potential material for a new season of anime.

However, in the case of Tokyo Ravens, the original light novel consists of 11 volumes, nine of which were used to create the first season of the anime. Therefore, it is difficult for producers to make a sequel with only two volumes.

Because, the renewal of an anime series is determined by a number of variables, all of which are taken into consideration by the selection committee. Since animes are commercial endeavors, their success in the marketplace is crucial.

The availability of light novels as source material is another factor that plays a huge role in the production of the upcoming seasons. So to be honest, the return of Season 02 of Tokyo Ravens is extremely unlikely.

What To Expect From Tokyo Ravens Season 2 If There Will Be Any?

If the second season of Tokyo Ravens is released, as has been speculated by some, it may vary from the main story and may not pick up where the first season left off.

The second season of Tokyo Ravens may address the source of demon abilities or bring up new stuff that hasn’t been presented before. Further, it has the potential to shed light on the mysteries of the Onmyoji ritual.

If Season 2 is released, we may see some new characters, while the main characters will remain the same.

Is It The End?

While Tokyo Ravens’ current popularity isn’t high enough to warrant a second season, we sometimes witness unexpected cases where anime are given green light for a second run.

However, we recommend you not set your hopes too high for the second season and instead start watching other anime in the same genre. And here are the Best Magic and Sorcery Anime Series to move on.

Just like Monkey D. Luffy is to be the King of the Pirates, Roronoa Zoro has been destined for greatness since One Piece started. The...
Previous article
Wise Man’s Grandchild Season 2: Release Date, Rumors & More
Next article
Where To Watch Mob Psycho Season 3? All Seasons Recapped!