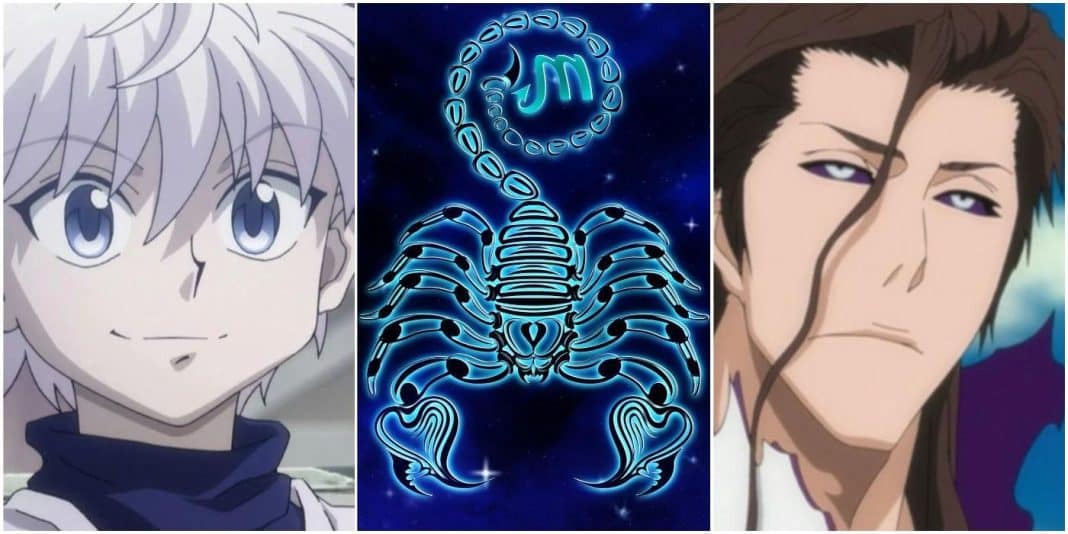 Scorpio anime characters are passionate, intensive, and ferocious. They are perhaps some of the most mysterious characters compared to other zodiac signs.

Scorpios can demonstrate strong determination and bravery whenever confronted with a challenging situation. Besides these traits, they also possess dark desires and may often act cruelly and selfishly to manipulate others for their benefit.

We’ve listed the 10 most mysterious Scorpio anime characters that will leave you in awe.

Scorpio is the zodiac’s 8th sign with the symbol ”scorpion”. The period starts on October 23 and ends on November 21.

As the most energetic and enigmatic water-living animals, they are incredibly passionate and easily display emotions.

Even though they reflect Scorpios, people often associate their characters with the fire sign.

They believe life is a game of chess and know when to strike for maximum advantage.

Toge Inumaki appears in the series JJK as a secondary character. His family’s cursed speech method makes him one of the rare characters with a powerful cursed speech ability.

Toge goes to the famous Tokyo Jujutsu Secondary School and gets on well with classmates Maki, Panda, and Yuta.

While he appears selfish in many cases, he proves to be a caring individual. In fear of cursing someone by accident, he chooses to use talk less.

Sebastian Michaelis portrays several negative traits of the Scorpio sign despite his pleasant disposition. He acts pretty similar to a demon sent from hell.

Sebastian began his work as a butler after signing a contract with Ciel Phantomhive. His friendship with Ciel eventually demonstrates the reality of his character as a loyal friend.

Black Butler’s Alois Tracy was born on November 5 in the second version – the non-canonical season. Despite his harsh personality, he is loyal to his butler, Claude.

Alois is also a perfect example of a passionate Scorpio who pursues his desires despite the barriers. He is a magnificent example of the darker side of Scorpios and does not hesitate to go to any length to achieve his goals.

L Lawliet calls himself an introvert and lives a secretive life. He hides behind a computer and keeps his face hidden from the crowd.

Despite his personality flaws, Lawliet is brave and works as a mass murderer when everybody backs off. He also possesses all the superior qualities of Scorpio characters, such as bravery, determination, and boldness.

Yukihira Souma reflects the positive side of a Scorpio character. He is a loyal friend to have and trust. Souma is intensely passionate about his relationship with his father. Upon entering Totsuki Academy, he is seen as the underdog, a valuable member.

Chrollo Lucifer is the founder and leader of the Phantom Troupe in the HxH series.

This Scorpio anime character stands out with a cross tattoo on his forehead. He wears a dark purple coat decorated with white fur around the wrists and collar.

Even though he has a solid muscular body, Chrollo isn’t fond of his physical appearance. However, he is intelligent, charming, and charismatic, a born leader.

Azusa Nakano is a true epitome of a passionate Scorpio character and an extraordinarily talented musician.

Although Azusa is usually calm but easily irritable, she does not enjoy being teased and responds with whole-hearted anger.

Lastly, despite her sweet demeanor, she sometimes exhibits surprising stubbornness, a typical Scorpio.

Keisuke Baji was the first captain and a founding member of the street gang “Tokyo Manji.” As a teenager, he usually ties his long, black hair during a battle.

He has a charming smile with sharp canine teeth, and a wild and violent personality, which he often manifests by punching random people on the street.

Even after mastering Ultra Instinct and saving the universes from collapse, if there was anyone Goku was afraid of, it was his wife Chi Chi, mother to Gohan and Goten.

Chi Chi is a quiet girl with a pure heart. She can ride the Flying Nimbus. She generally tears up after killing her enemies in fights.

Tengen Uzui is a member of both the groups Sound Hashira and the Corps. He has a charming personality with long lashes and maroon eyes.

Tengen considers himself superior as a person of tremendous talent, which often makes him harsh and rude towards other people.

He’s a rare alpha Scorpio male with 3 wives and a clan to look over.

Like other zodiac characters, Scorpio Anime characters have both positive and negative sides. They have a lot of patience and act only when appropriate. However, that doesn’t mean they are nefarious and evil.

Let us know which of these Scorpio anime characters you love the most!

Extroverted, Intuitive, Thinking, and Prospecting. These are the traits of an ENTP person. We skimmed through the ENTP anime characters' personality database and ranked...
Previous article
Persona 5 Royal: Akechi Confidant – How To Unlock & Max Out?
Next article
All One Piece Arcs In Order – Sagas, Specials, & Movies