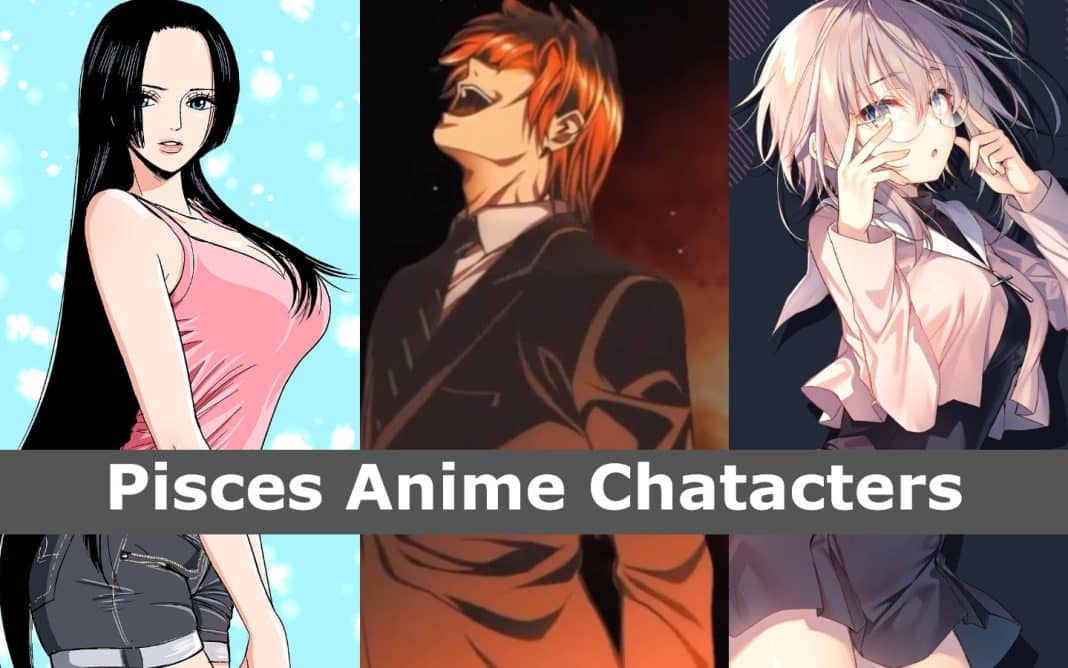 Pisces anime characters are known for their critical thinking. They have high ambition and goals with the desire to surpass their opponents in every aspect.

An anime character in Pisces is innately capable of going with the flow and can cope with positive and negative aspects of life.

In this article, we’ll walk you through some of the most-hyped male and female anime characters that fall under Pisces. Based on likeability, you can also find out the zodiac secrets of your favorite anime characters.

Pisces rules the period between February 19 and March 20. Its symbol is two fish facing each other in the opposite direction under the water.

According to Greek myth, the two fish were used as a means of escape when Aphrodite and Eros jumped into a river to escape Typhon.

As the last zodiac sign, it emanates a sense of dual nature which is also a prominent trait of the Pisces anime characters. Besides, you’ll also find these personality traits in Pisces:

Now that you know what Pisces is, it’s time to discuss the anime characters who are Pisces and what sets them apart from others. With that said, let’s get right into it.

Hiroto chose not to sing anymore because of desperation and fear of failure despite his marvelous singing performance in opera. Surprisingly, he cannot escape music, as it allows him to see the world in an attractive and aesthetically pleasing way.

Much of Hiroto’s talent is unrealized because he is opposed to reality and afraid of exposing himself to reality. However, he is calm and committed to whatever he can accomplish on his own. Most Anime fans also find Hiroto to be highly appealing because of his charismatic personality.

On the other hand, they are soft-spoken and can handle challenging situations calmly. The surprising mental abilities of Pisces make them ideal for handling demanding situations.

Aimaru has nearly all the leadership qualities that make him the leader of the Gourmet Knights. The Aimaru tribe tends to lead by example and not by terror. Aimaru is physically and mentally gifted, which is why he leads from the front.

As Pisces tends to live in reality and fantasy, Fuji is an excellent example of an immortal person who has lived outside reality.

Due to his antisocial personality, he is unpredictable, making it difficult for another person to read his thoughts. Despite this uncertainty, Fuji can adapt well to the situation and tackle critical problems.

Clear represents a mysterious and weird character who works as a bartender. He has an off-putting behavior due to his lack of understanding of people. This eccentric nature makes him one of the most intriguing Pisces characters.

He tries to solve others’ problems and meet their needs even though his interpersonal skills can’t be attributed to any empathy on a human’s part.

As a natural being, he puts the needs and desires of others before his own. This is an aspect of this sign’s empathy and emotional permeability, but it may also have a few negative vibes.

Light is cold-blooded, while Pisces is typically highly emotional and fond of making rational decisions. Although Pisces characters are less empathetic than characters of other star signs, some are intuitive and can quickly grasp the other person’s feelings.

Despite his formidable critical thinking skills, Light is well-versed with knowledge, trusts his senses, and believes more in logic which helps him remain ahead of his pursuers for the longest time.

Hinata is a considerate person, making it challenging for her to help people in times of suffering. There is an inherent kindness in both Pisces, which represents the generous personality of Hinata.

While most Pisces characters revolve around water, Hinata is different and means air. Most of the time, she likes to enjoy spending time alone or with close friends and avoid being in the spotlight. Besides being likable, characters like Hinata are excellent romantic partners.

Hina is a marine officer and has a habit of speaking in the third person. She often appears severe and doesn’t try to seem adorable but more like an antagonist character.

After her unsuccessful attempt to capture Luffy, she willingly acknowledges her defeat with respect and logical reasoning. Hina is well versed with historical facts, which is evident in several situations.

As a Pisces, Michiru is incredibly sensitive to death, which often extends to supernatural levels. Due to her sensitive nature, Michiru gets easily affected by her surroundings.

However, Michiru’s new friends have made quite a difference in her life. She now willingly recognizes the impressionable aspect of her psyche, surrounds herself with positivity, and tries to live a happier life.

Hancock is regarded as a mighty woman by both her friends and enemies. She oversees Amazon Lily, the other Kuja women, and her sisters. She is likely the strongest Kuja warrior and proves her authority as the captain of the tribe.

The Kuja tribe has a strong belief in the strength of beauty which is also why they consider Hancock, the most beautiful woman in the world. She is also considered the strongest among his tribe, representing Pisces’s dual personality trait.

Ririchiyo, like other Pisces, is the master of her destiny. Since she does get affected by others’ actions and words, Salsoul calls her a too-sensitive Pisces character. As a result, she keeps herself isolated to protect herself from the outside world.

So these were the top male and female Pisces characters that anime lovers adore on their favorite shows. Nearly all the characters mentioned here possess the dual nature of the Pisces zodiac sign. They have surprising personality traits, which sometimes include fantasy while other times reality.