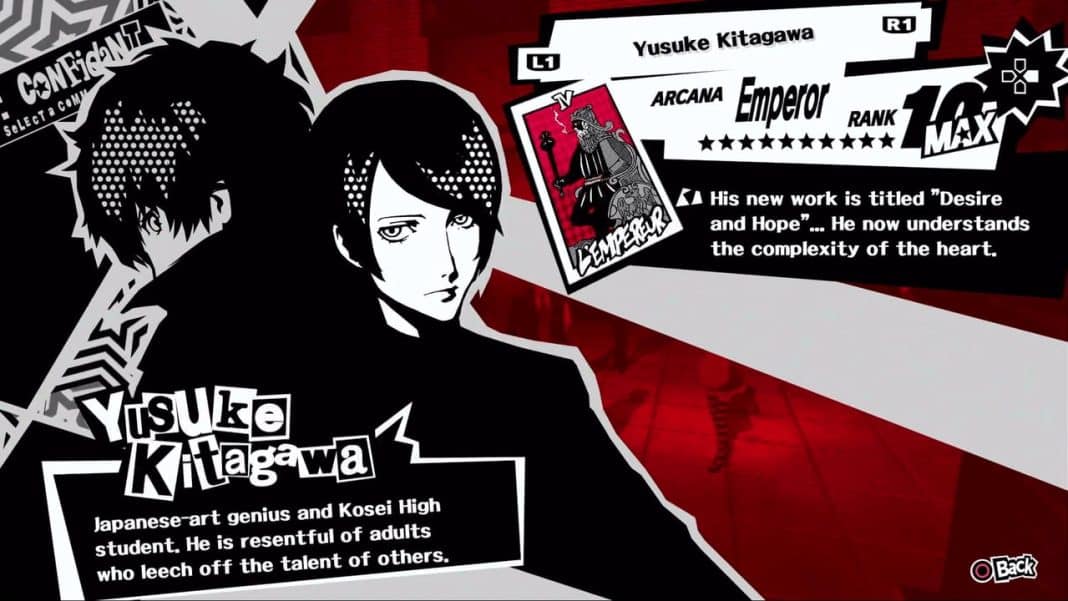 Yusuke Kitagawa is the Fox of Phantom Thieves and represents the Emperor Confidant. He is a fierce warrior but socially very awkward because of his upbringing in a confined environment.

The Fox uses a mix of guns and swords to fight shadows with significant effect. And he also improves others around him, provided you max out the Yusuke Confidant.

Yusuke joins the party just before the Second Palace heist. After that, you can initiate his Confidant and unlock all the perks by improving the relationship. And here is our Yusuke Confidant guide to help you out.

When Does the Yusuke Confidant Begin in P5R?

Yusuke is available at the underground walkway of Shibuya Subway Station. You can meet him there 7 days a week. He’s only available during the daytime, but when it’s raining he’s available at nighttime too.

You can begin Yusuke’s Confidant on June 18. Once you complete the events of June 18, you can meet up with Yusuke at Shibuya’s underground station walkway. As soon as you engage him, his Confidant will begin.

Yusuke Confidant – Responses of Every Rank

After some chit-chat at the station, Yusuke will take you to Mementos, where both of you will fight 5 weak slimes. It’s an easy win, so don’t stress.

Yusuke: I have to hold up my end of the deal, so I’ll perform to the best of my ability. You need only ask.

Bonus: Get a Recarm Skill Card.

Yusuke: I would like your honest opinion… if you would.

Yusuke: More importantly, it shall be the spark that revitalizes my slumbering art career!

Yusuke: I’m on a roll right now. I shall keep up this momentum and apply it to the Phantom Thieves as well!

Yusuke: My work is… empty?

Yusuke: What is going to happen to me now…? Without art, what will remain of my being…!?

Yusuke: But that is all the more reason I must break out of my slump. I must prove my ability to him…!

Yusuke: I will simply keep on drawing. I’m going to have ten pieces finished up by end of today!

Yusuke: Thank you for your assistance today. After all, it would be impossible to sketch while rowing.

Best Response: +2. Why are we in a boat?/I should bring a girl here.

Yusuke: It seems my bias has caused me to overlook the truth of the matter…

Yusuke: When will I fully understand the heart? Even if I ever do understand it, will I truly be able to draw it…?

Yusuke: Very well. <Protagonist>, you will have to be my model today.

Yusuke: <Protagonist>… Do you think I will be able to capture the truth someday?

Yusuke: The more I think about it… the further I seem to be from understanding the abyss of the heart.

After achieving Rank 5, you have to make sure you have Level 4 Proficiency. Only then will you be able to unlock and play out the Rank 6 event of Yusuke Confidant in Persona 5 Royal.

Yusuke: Hm, this place has not changed in the slightest…

Yusuke: …<Protagonist>, why do you think Madarame decided to take me in?

Best Response: +3. Maybe he was sympathetic./I couldn’t possibly tell you.

Yusuke: By the way, that gentleman… Kawanabe, was it? What’s your impression of him?

Best Response: +2. He had a certain dignity.

Kawanabe: There is definitely a market for you. We’ll sell you as the ‘tragic, handsome artist.’

Yusuke: Why is it that all artists talk about is money, money, money!? Has the true meaning of art been lost!?

Best Response: +3. The truth is within you.

Yusuke: I’m tainted after all…! I’m a petty sellout, a slave to the power of money!

Best Response: +2. Calm down./It’s not a crime to enjoy sushi.

Yusuke: <Protagonist>, what subject do you think would most capture beauty?

Yusuke: Is this what pure passion is supposed to look like!? My heart is clouded by worldly desires…!

Yusuke: When my mother was painting the ‘Sayuri’… what do you think she was thinking about?

Best Response: +3. Her love for her son./The pain of separation.

Yusuke: But that is why I am going to wield my brush again… To give hope to all those who see my paintings.

After you get Rank 10, Yusuke’s Persona will transform from Geomon to Kamu-Susanoo. And, you can now fuse Odin. So, double whammy!

Now you know how to begin and max out Yusuke Confidant in Persona 5 Royal. These abilities will make Metaverse visits a lot easier. So, you decide whether you want to max him out ASAP or hold out.

And remember, you should have an Emperor persona on hand to gain maximum points.

Scorpio anime characters are passionate, intensive, and ferocious. They are perhaps some of the most mysterious characters compared to other zodiac signs. Scorpios can demonstrate...
Previous articleTop 10 Pisces Anime Characters- Male & Female [2022]
Next articlePersona 5 Royal – Chihaya Confidant Availability & Ranks