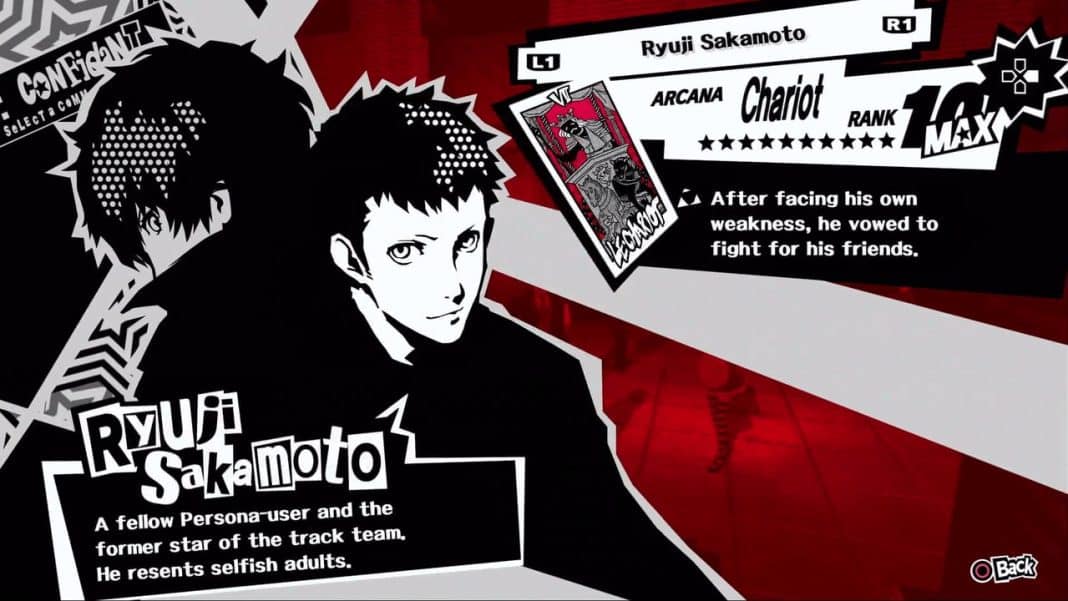 Ryuji Sakamoto is the Chariot Confidant in Persona 5 Royal. This troublemaker in class proves ryuji confidantto be a stunning addition to the Phantom Thieves.

He is also one of the few Confidants that initiate automatically as part of the story progression.

His Confidant will begin as soon as you visit Kamoshida’s palace with Ryuji. That’s also when both these characters will awaken their personas. All this unfolds during the April 12 visit to the old castle.

After that, you can hang out with Ryuji to Rank his Confidant and unlock several perks. And that becomes a tad easier with our guide. We’ll tell you where to meet up with him and what answers to choose, so your relationship develops quickly.

Ryuji is available at 2 different locations depending on the day.

On school days, Ryuji hangs out on the Academy’s second floor. He’ll be standing by the stairs outside the classroom during the day.

If there’s no school, you’ll have to go to the Shibuya arcade to hang out with him, but during the day only.

Ryuji is available 7 days of the week, but only during the day. But when it’s raining, he’s available at night as well.

Now that you know Ryuji’s whereabouts, it’s time for the cheatsheet.

Here are all the rewarding chats of every Rank event in Ryuji Confidant. Using these will get you maximum points to achieve Rank 10 with ease.

Pro Tip: Keep a relevant persona (Chariot) meeting with Ryuji to get the most points.

Ryuji’s Rank 1 event starts and finishes as part of the story progression. There are plenty of dialogues, but none reward any points. So, you can choose any answer and you’ll still complete Rank 1 of Ryuji Confidant.

Ryuji: Plus, maybe then I’ll be able to help out a little more.

Ryuji: Ugh… I should’ve kept up my running.

Ryuji: That don’t got anything to do with this…

Ryuji: I get pissed off so damn easily. I really gotta work on that.

Ryuji: But for some reason, it don’t look like he’s gettin’ along with the others.

Best Response: +2. Are you worried about him?

Ryuji: It’s good they’re keepin’ their heads low now though. I don’t want ’em endin’ up like me.

Best Response: +3. But you’re doing great./I know how you feel.

After achieving Rank 4, you get some time off. Ryuji’s Rank 5 event is only available on and after May 6. In the meantime, maybe focus on some other Confidant.

Ryuji: …Good for them.

Best Response: +2. You seem conflicted./Do you want to rejoin?

Ryuji: But I mean, if anything happens, I know you got my back. So I ain’t too worried!

Ryuji: You got any ideas?

Best Response: +3. We can train at my place.

Ryuji: <Protagonist>… You get what I’m tryin’ to say, yeah?

Ryuji: And Nakaoka can get weirdly stubborn sometimes. He’ll keep his mouth shut whether or not someone’s punchin’ him.

Best Response: +2. So he should’ve punched back?

After you get Rank 6, Ryuji Confidant is out of your hands for now. Ryuji will text you for a stakeout, and only then will the Rank 7 event begin. It happens on specific dates, so better not miss the text.

Ryuji: If we don’t do something quick, Yamauchi’s gonna get rid of Takeishi too… God dammit!

Ryuji: I know that ain’t the coolest thing to say, but it’s how I feel.

Ryuji: Besides… I doubt those guys are gonna listen to anything I say…

Ryuji: You saw that, right? That was some serious violence!

Ryuji: It’s kinda like I was doin’ a sprint… and you were runnin’ next to me.

Best Response: +3. You weren’t cool though.

Ryuji: Seein’ them havin’ a real heart-to-heart talk… They got a good team.

Ryuji: Looks like they’re finally walkin’ their own path.

Best Response: +3. Are you satisfied now?

Ryuji: Oh, and uh… they asked me to come back to the team.

Ryuji: Wherever you decide to be, that’s where you belong.

Ryuji: They’re apparently keepin’ Yamauchi as their advisor for now, but it’s cool. Sounds like they got him under control.

Best Response: +2. Congratulations./Better watch out for them.

Ryuji: I think they might even go far in the meet.

Also, once you max out Ryuji Confidant, you’ll get to fuse with Chi You.

That’s all there is to Ryuji Confidant in Persona 5 Royal. Now you know what you’ll get and how to get it. And looking at that abilities table, you just know you need this Confidant maxed out ASAP!

Also, check out our extensive Confidant guide that covers all Persona 5 Royal Confidants.

Just like Monkey D. Luffy is to be the King of the Pirates, Roronoa Zoro has been destined for greatness since One Piece started. The...
Previous article
All One Piece Fillers: Arcs & Episodes That Don’t Matter
Next article
One Piece Dub: History, Mistakes, & Best Platform To Stream