By Shahzaib Manzoor
Updated On: September 8, 2022 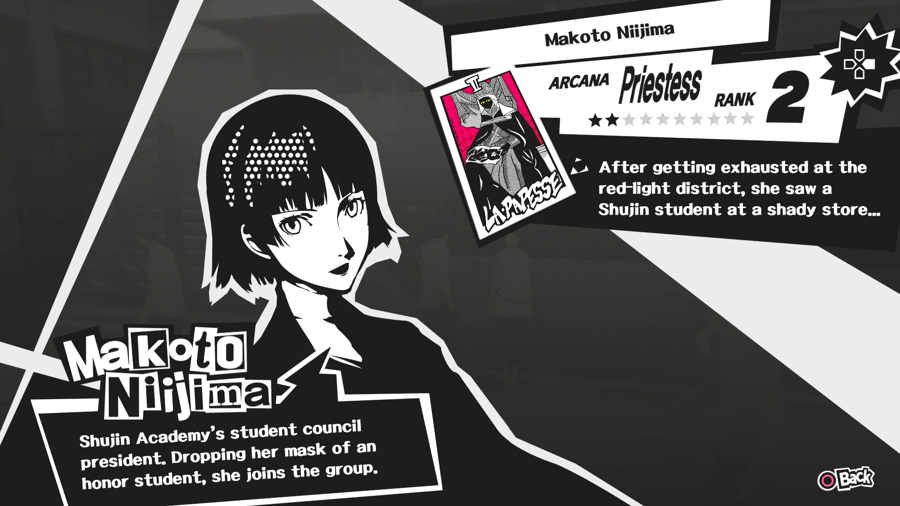 Makoto Niijima is the president of Shujin Academy’s Student Council, and she represents the Priestess Arcana. A nay-sayer at first, Makoto joins the Phantom Thieves after learning their story.

Makoto is a combat-focused Confidant nick-named the Phantom Thief Queen. And with all her perks unlocked, you’ll feel a considerable improvement in your fighting abilities.

So, it’s about time you focus on the Makoto Confidant.

We’ll tell you how to start her Confidant, where you can meet up with her, and how to achieve maximum Rank with minimal effort.

So, don’t sit back, and let’s get started.

When Does Makoto Niijima Become a Confidant?

Unlike the Sojiro Confidant, which begins with a simple meeting, Makoto’s Confidant requires the player to get some serious stuff done. Her Confidant becomes available on June 25, but to initiate, the player needs.

Once you have these 2 things, you can meet with Makoto at –

Here is a list of the days and times Makoto is available.

Makoto Niijima really is an OP Persona 5 Royal Confidant. She’ll award 8 perks. So, by the time you get Rank 10, you’ll have 8 combat-related perks.

Now that you know what you’re getting, let’s tell you how to get it.

You’ll spend a lot of time with Makoto but not all chats reward points. In this section, you’ll find all the actionable chats that will reward points. Take a Priestess persona along when meeting Makoto, so you get the most points.

You can also cash in on 1.5x Affinity Points if you rank first in school exams.

Now, let’s jump to the best responses for every rank.

Makoto: I’ve had all kinds of new experiences today… and it’s even been a little fun.

Makoto: I heard there were quite a few brothels as well.

Makoto: If you hadn’t been there to rescue me, I…

Best Response: +3. That was dangerous.

Makoto: Today was exhausting, but I also learned a lot. I guess nothing beats practical experience.

Eiko: What’s up with that, Miss Prez?

Best Response: +2. You have the wrong idea.

Makoto: She thought I was a robot…

Best Response: +3. You can change.

Makoto: It was crazy to see a picture of her entire collection. She even has a bunch of Buchimaru-kun emoticons!

Makoto: So, my class had a practice entrance exam… and my score was significantly lower than last time. I’m concerned…

Best Response: +2. That’s unlike you.

Makoto: I sent her a picture… and it’s apparently the same brand they use in the nurse’s office at school.

Makoto: I had completely forgotten about that dream, to be honest…

Makoto: Since then, he’s the only thing she’ll talk about. She even sent me a picture of their date at Destinyland.

Makoto: This time, um… you’ll have to play the role of my boyfriend.

Makoto: But if it turns out he really is toying with Eiko… what should we do…?

To progress further, you must have Charm maxed out.

Tsukasa: Are you seriously datin’?

Makoto: He uses these weird symbols—I have no idea what he’s saying. I want to ignore him, but I shouldn’t for Eiko’s sake…

Makoto: I’m not sure any of that would have happened if not for the incident with my father…

Best Response: +3. That’s a horrible story./He was a noble man.

Makoto: That was how my father chose to live his life… Trying to bring justice and order to the world around him.

Makoto: And more importantly, how do I want to live…?

Makoto: U serious abt <protagonist>-kun?

Wanna have a double wedding?

Makoto: I don’t trust Eiko’s boyfriend yet, so… can we keep this up until I can make a call one way or the other?

Best Response: +3. It’s the role I always hoped for.

Makoto: So he calls you his special princess… What do you think, <protagonist>-kun?

Best Response: +2. He says that to all his girls./That’s how he ropes you in.

Makoto: She needs to realize that. You’re going to help, right?

After you get Rank 8, head over to Shinjuku and collect information about Tsukasa. You’ll have to talk to a man standing outside a bookshop- twice.

Once you initiate Rank 9, you’ll also get to choose between Makoto’s Friendship or Romance arc.

Makoto: I dare you!

Makoto: I can’t believe I actually hit one of my friends…

Best Response: +2. That was the right move.

Makoto: How did you ever find somewhere like this…? You know so much.

Now’s the time to choose. Want a platonic relationship or want to romance the High Priestess?

Makoto: I can’t learn about romance by myself…

Makoto: ‘d probably never have pulled this off alone. Thank you so much.

Regardless of what you choose, the responses for Rank 10 are the same.

Makoto: I think she knew it deep within her heart, and seeing him like that finally helped her realize.

Makoto: I plan on doing the same as well.

Best Response: +2. Are you stressing over exams?

Makoto: My dream… is to become a police commissioner. That is why I need to study.

Makoto: Instead, I want to head an organization that will destroy the lawless and help rescue victims.

Best Response: +3. What an admirable goal. / Your father would be proud.

Makoto: Must have been difficult babysitting the uptight Miss President, right?

Best Response: +3. We went through so much…

Makoto: *giggle* What a funny thought… Studying to become a head of police while working as a thief…

And now you know everything about the Makoto Niijima Confidant in Persona 5 Royal.

Makoto is one of the most rewarding Persona 5 Royal Confidants, and you should be looking to max her out ASAP. Plus, you’d want to fuse with Cybele, won’t you? And that only happens when you achieve Rank 10 of Makoto Confidant.

Just like Monkey D. Luffy is to be the King of the Pirates, Roronoa Zoro has been destined for greatness since One Piece started. The...
Previous article
30 Iconic Black Anime Characters Of All Time
Next article
Attack On Titan Map | All Nations Explained