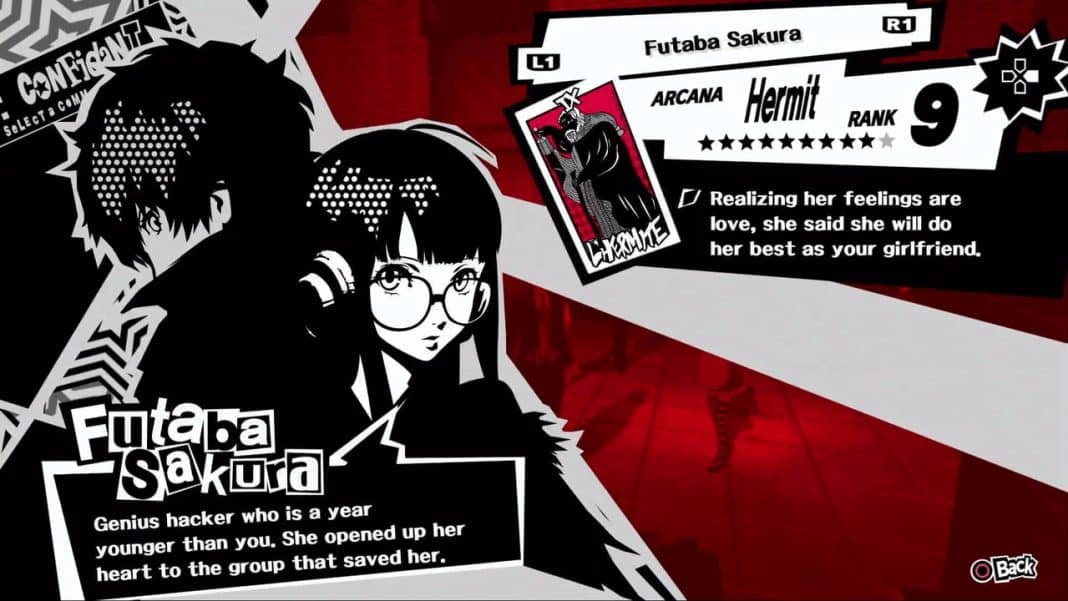 Futaba Sakura represents the Hermit Confidant in Persona 5 and Persona 5 Royal. She is Sojiro’s daughter, so you’ll often see her at Cafe LeBlanc. From an employer of the Phantom Thieves, Futaba joins the group later on.

On 31st August, the player meets Futaba at Akihabara, and that is when the Futaba Confidant begins. After you initiate her Confidant, Futaba mostly hangs out by the Cafe LeBlanc, in the Yongen-Jaya backstreets.

But, she is not available every day.

Read on to learn about her availability, her abilities, and more.

Futaba’s Persona 5 Royal Confidant is available on the same days as Persona 5 Futaba Confidant. You can chat with her outside Cafe LeBlanc 4 days a week.

But she won’t be there on rainy days.

Futaba is the closest to the Priestess Persona 5 Royal Confidant in terms of abilities. Makoto has 8 abilities, and Futaba has 7.

Completing the Futaba Confidant will bring in 7 combat-related abilities with some magical power-ups as well. In the end, with Rank 10, Futaba’s persona will transform from Necronomicon to Al Azif.

Here are the rest of the perks you enjoy as Futaba’s Rank increases.

How to Increase Futaba Confidant Rank?

Here you will find all the answers to all the rewarding questions. Plus, we’ll also let you know what to choose if you want to romance Futaba in Persona 5 Royal.

One more thing, when you meet Futaba, you should try to have a Hermit persona with you to get the highest possible points.

Futaba’s Rank 1 is automatically achieved with the story progression. There are 4 dialogues in this event, but none of them reward any points. So, you can choose any answers you want.

After this event, you have to make sure your Kindness Rank is 4. Only then will you trigger Rank 2 of Futaba’s Confidant.

Futaba: But online classes are better for studying! I wouldn’t even have to leave the house.

Futaba: …Do you think I’ll be able to?

Best Response: +3. If we work together.

Best Response: +3. I was about to come find you.

Futaba: But then I thought about you while I was wandering around the store, and bam, a wild <protagonist> appeared!

Futaba: But at this pace, I’ll clear it in no time…! Right?

Futaba: Can I use a Goho-M instead…?

Best Response: +3. Let’s do this together.

Futaba: I guess dwelling on the past is just a bad habit of mine, huh…?

Futaba: I still think I’d run out of MP way too fast. The real world is a scary place…

Futaba: Nishima… Are you an NPC!?

Futaba: I’m a completely different person now! No more getting scared of the police! C’mon, tell me I’m cool!

Futaba: But one day, she said something to me: ‘Good morning.’ She started saying it every day from then on.

Best Response: +3. That must have been a shock.

Futaba: I felt terrible, but she just kept yelling at me for reading it…

Futaba: I know I promised myself that I’d do this… but when I remember how angry Kana-chan got, I get so scared…

Best Response: +2. Are you running away again?

Futaba: …Apparently, they’re still having her model in strange clothes. They’re even selling the pictures now…

Best Response: +2. What horrible parents./We have to put a stop to this.

Futaba: Please, help me save her!

Now’s the time for a Mementos request. You’ll have to complete Daughter’s Just a Meal Ticket to progress further and initiate Rank 8 events.

Futaba: Long story short… we made up! I finally apologized to her.

Futaba: It’s all because of you that I could do it, <protagonist>!

Futaba: And now I’m getting along with Kana-chan… I’m so glad I cleared that goal.

Futaba: Then even when we’re apart, I can’t stop thinking about you…

Best Response: +3. Are you okay, Futaba?

Futaba: …Can we skip that last promise?

Now’s the time to pick the future of your relationship with Futaba.

Best Response: (Friendship) Because we’re teammates. / (Romance) Because I love you.

If you choose Friendship.

Futaba: Could you get specific? What kind of teammate am I to you?

If you choose Romance, you’ll face 3 more scenes. These are not rewarding and you can pick any answers you want.

Futaba: I just hope I can change little by little… like everyone else does.

Futaba: Even Kana-chan’s trying to step out into the world.

Futaba: I just hope I can change little by little…like everyone else does.

Futaba: Even Kana-chan’s trying to step out into the world.

Futaba: That way… we’ll never be apart if I don’t want to be.

Best Response: +3. I want that right too.

And that’s our Futaba Confidant guide for you.

Now you know exactly what you’ll get and how you can get it. But before you go for the daughter, we suggest you impress the father. Just why you should read our Sojiro Confidant guide!