All One Piece Filler Episodes Explained!

By Shahzaib Manzoor
Updated On: September 4, 2022 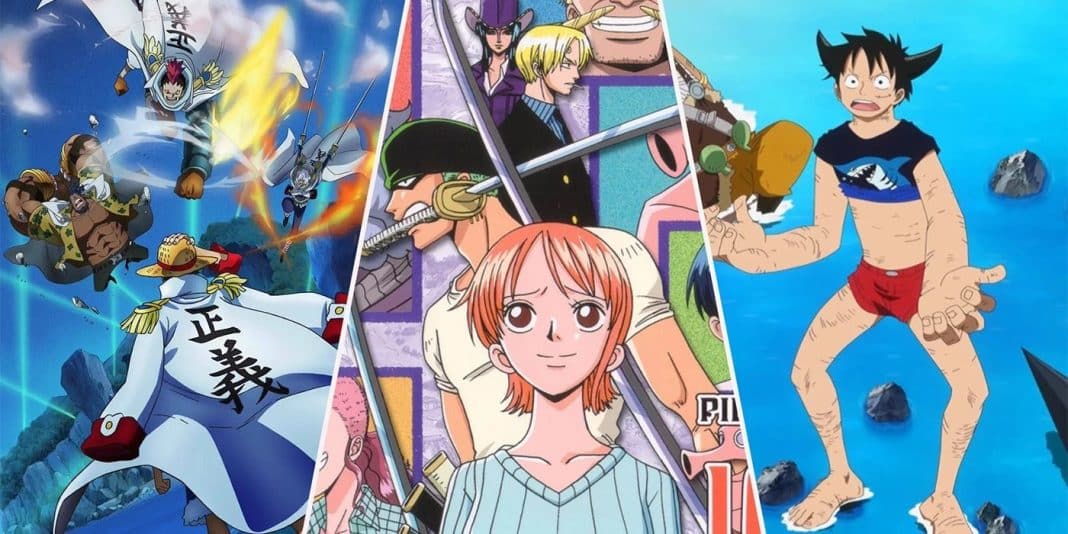 An anime running since 1999, parallel to its manga, is bound to have some fillers. One Piece filler percentage is ~9%, which is relatively low in anime. And with fans labeling it as “the best filler,” new viewers are confused about which One Piece filler episodes to skip or watch.

We will admit that One Piece anime creators did a great job with filler episodes. Very few of them connect to canon arcs, but all of them are entertaining. However, we totally understand if you don’t want to watch any of them.

That’s why we’ve decided to help out.

We’ve prepared a One Piece filler list. But it’s not just a list naming the One Piece filler episodes. Instead, we will list the fillers, explain what happened in those episodes, and then you can decide whether to watch or skip them.

What Is One Piece About? Premise & Wiki

One Piece is about Monkey D. Luffy who wanted to be the Pirate King ever since he was a young boy.

So, he set out on an adventure to find the One Piece. From Floating Islands to mystical lands under the sea, Luffy leads a crew of misfits through adventures of a lifetime.

But, a New World is rising. The Straw Hat Pirates survived till now, but their biggest challenge is upon them.

With Season 20 nearing its end and the story still incomplete, fans are already excited about Season 21.

And just like the previous seasons, we hope platforms like Netflix, Funimation, and Crunchyroll will get Season 21 rights too. After all, these 3 are currently the best platforms to stream One Piece- and a host of other anime.

How Many Filler Episodes are in One Piece?

By the end of Season 20, we would have 1031 One Piece episodes, which will hopefully bring the Wano Country arc to an end.

Out of these, a few episodes are still to air. So, up to episode 1027, there are 73 filler episodes in One Piece.

Here is a complete list of One Piece filler episodes and their arcs.

Aside from these filler episodes, there are 13 One Piece Specials. And the good thing about Specials is that they are skippable. But you don’t want to skip the One Piece Movie: Strong World because it connects to a canon arc.

For those who don’t want to spend hours upon hours watching the 70+ One Piece fillers, here’s a simpler solution. Read our synopsis of all the One Piece filler arcs. You’ll know what happens in each arc without watching a single minute.

It’s important to note that we’ll be explaining the arcs instead of every single episode.

Warship Island is the first filler arc of One Piece. It spans over 8 episodes, and this arc covers the story of the Straw Hat Pirates helping a girl with a dragon return to their homeland. Moreover, the Sea Kings and the Marines are hunting the girl with the dragon.

If you are interested in a history lesson on the Straw Hat Pirates, you will love the 5 episodes of Post-Arabasta Arc. Apart from Robin and Luffy, every Straw Hat Pirate gets a stand-alone episode, which provides some never-before-seen content.

These are the most watchable One Piece fillers because it explains every character’s motives.

The Straw Hat Pirates are chased into the fog by the Marines, and they end up on a seemingly uninhabited island. However, they soon find out a half-constructed ship, an old man, and plenty of goats- hence the name Goat Island.

Over 3 episodes, the pirates stay on the island trying to win back the Going Merry from the old man. It all enters a weird territory when the Straw Hat Pirates end up doing the old man’s chores.

In short, this is an irrelevant and skippable arc.

As usual, Marines are chasing the Straw Hat Pirates. The pirates come across Ruluka island. A cruel scientist is experimenting with children, a crazy mayor is sponsoring all this, and a pirate/dictator rules over the island.

Our verdict- skip this filler.

After the Sky Island arc ends, the Going Merry, along with the pirates, should have dropped into the open sea. However, it ends up at a Marine base- the G-8. Surrounded by their hunters, the Straw Hat Pirates need to survive and get Going Merry back.

G-8 is one of the most loved One Piece fillers and a must-watch.

The Ocean’s Dream arc is based on a PlayStation game of the same title, and it has an interesting premise. Every member of the Straw Hat Pirates loses a part of their memory.

This arc is an opinion divider. Some call it boring- others (and us) call it an essential watch.

The Straw Hat Pirates find Foxy, Hamburg, and Poche floating on a small boat trying to survive a storm. The show derails completely from there and starts following Foxy’s story of trying to get his ship back.

It’s the worst One Piece filler, and one you don’t want to waste time on.

Ice Hunter is one of the longest One Piece filler arcs, and we wish it was any good. Over the 10 episodes, the arc gets boring and boring as the pirates chase after the Accino family for a flag.

Another one of those fillers that don’t have the slightest of connections to any canon arc. Everyone’s having fun after the Thriller Bark arc chaos and when Foxy and his loyal comrades re-appear. The recurring antagonist is still as underwhelming as ever.

If you are looking for some humor, you’ll not find much in the Spa Island arc. So, just move on.

The crew ends up at a small island that perfectly resembles their own East Blue. As they try to blow off some steam and have a good time, some pirates attack them. And then it’s business as usual.

We recommend watching these 4 episodes because they connect to the One Piece Movie: Strong World.

This is another skippable story arc because of its poor execution of an already filler/non-canon storyline. If you plan on watching the One Piece Film: Z, only then suggest watching this. Otherwise, it’s not worth it.

This filler arc revolves around one of the One Piece fan-favorite side characters. Someone boards the Straw Hat Pirates ship and kidnaps an already kidnapped Caesar Clown. And now they have to get him back for a multitude of reasons.

There are some important plot lines and character developments in this arc, plus it’s pretty funny, so you should give it a watch.

Bartolomeo is back in this one. If you are solely focusing on the story, there’s nothing important in this arc. But, for Bartolomeo lovers, this is absolutely unmissable.

Luffy and Bartolomeo land in a silver mine. As they try to find a way out, the whole thing becomes a treat to watch.

After the G-8 arc, Marine Rookie is our favorite because of its engaging content. The Straw Hat Pirates once again end up infiltrating a Marine base and we get to see more of how and why the Marines do everything. Still, it is a filler and has no canon links, but the 3 episodes are a fun watch.

This was the last One Piece filler before the Wano Country arc began. It’s a classic filler story with the crew stopping at an island to restock and getting attacked. Nothing new, nothing worthwhile, although there is some great animation.

And that explains all the One Piece filler episodes.

Now you know what every One Piece filler arc offers and which ones are skippable. The best solution is to complete the canon episodes first and then watch the fillers if you have spare time. And you’ll get plenty of that after Season 20 ends.

Just like Monkey D. Luffy is to be the King of the Pirates, Roronoa Zoro has been destined for greatness since One Piece started. The...
Previous article
All One Piece Characters We’ve Met In The Anime So Far
Next article
20 Best Anime With Magic, Sorcery & Adventures in 2022