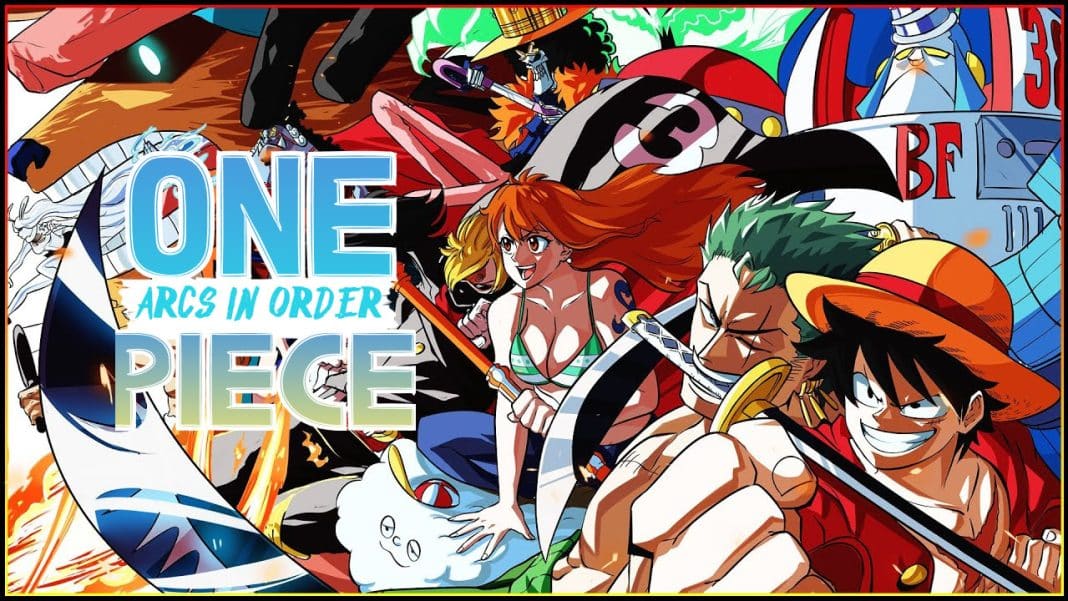 Eiichiro Oda created the first ever One Piece volume back in July 1997. Back then, no one would have thought that One Piece would become the highest-selling manga of all time.

Today, 25 years on and over 500 million copies sold, One Piece tops manga and comic book sales by some distance. And it’s also one of the longest-running manga series with over 1000 Chapters across 102 Volumes.

But enough about the manga.

Two years after the first manga Volume, TOEI Animation decided to turn One Piece into an anime. In October 1999, Fuji TV aired the 1st episode of One Piece anime, and so began one of the longest-running anime series of all time.

One Piece has nearly 1000 episodes, 13 specials, and 13 movies. Moreover, the manga is in full flow as well.

As new manga volumes and anime content comes out regularly, there’s a lot of content to watch. New starters can have a hard time navigating through all this. And that’s where this One Piece arc list proves handy.

Where To Watch One Piece?

Before we begin the One Piece arc list, here’s another list of all the platforms where you can watch One Piece.

We don’t suggest it, but One Piece is available on Amazon Prime Video. You’ll have to pay $1.99 for every episode, and it’s not even in HD.

Think of sagas as seasons. Each saga has multiple One Piece story arcs that follow the adventures of the Straw Hat Pirates. And every arc is spread across multiple episodes.

We’ve listed all One Piece sagas and arcs in order; so you don’t mess up your experience of watching one of the most popular animes of all time.

Moreover, we’ve also mentioned the corresponding manga chapters that every One Piece arc covers. So, you’ll know how much manga you’ve caught up with while watching anime.

You’ll also see Specials and Movies in this list. Their place on the list suggests the right time to watch them without spoiling the original series.

Sea of Survival: Super Rookies Saga – All One Piece Arcs in Order

If you don’t know already, One Piece features a two-year time skip. During this time skip, the gang decides to skip adventures and train hard to become stronger.

Now, this time skip is a significant event in One Piece anime.

Viewers have divided the series into two halves; before the time skip (Sea of Survival: Super Rookies Saga) and after the time skip (The Final Sea: The New World Saga). So, we’re going to stick with it too.

Here’s a list of all One Piece arcs in the Super Rookies Saga, which further has 6 sagas.

The first saga that began it all. We are introduced to Luffy as he starts recruiting his team of pirates to set sail in search of the One Piece. We meet Zoro, Sanji, Nami, and Usopp for the first time.

There are 8 arcs in the first saga with one filler and one special at the end.

The Alabasta Saga is about the princess of Alabasta Kingdom and how the Straw Hat Pirates help her out.

The crew searches for Skypiea, the legendary floating island. There’s a slot of One Piece fillers in this saga, but it’s still worth the time.

It’s also called the World Government saga. And in this saga, the pirates get a new ship (Thousand Sunny), and a shipwright, Franky, joins the crew.

Here is the One Piece arc list for Water 7 Saga.

The crew finally makes their way to the ghost island. Thriller Bark is the shortest saga of One Piece anime and manga with just 1 canon arc.

Summit War is the final saga before the two-year time skip. The World Government wages war on the Whitebeard Pirates, and everyone starts preparing for the New World.

That brings the first half of One Piece arcs to an end.

The second half began with episode 517 which aired on October 2, 2011. It was the beginning of a new era for the Straw Hat Pirates as they set sail for The Final Sea.

The Final Sea: The New World Saga – All One Piece Arcs in Order

There are 3 sagas in the Final Sea. The first 2 are relatively short with only 2 canon arcs each, but the third is the longest ever One Piece saga that’s still running. Here are all the One Piece arcs of these 3 sagas.

The crew did visit (and nearly destroy) a floating island. So, it’s only natural that they visit a drowned island as well. The crew gets back together and heads underwater. Also, this is the only saga with no fillers- don’t miss a second.

As the crew enters the New World, the most notorious of pirates welcome them to what is going to be the most difficult venture yet.

This is the current running One Piece Saga. The crew is growing and so are the enemies.

How Many Chapters Of One Piece Are There?

One Piece manga has 1053 chapters as of now. Eiichiro Oda will be returning to the drawing board after his month-long hiatus.

And on July 25 we’ll be treated to chapter 1054 which will begin the conclusion of this extraordinary shonen manga and anime series.

Chapter 1054 will officially begin the post-Wano Country arc- and by the looks of it, this seems to be the last saga and the final One Piece arcs.

After nearly 25 years, the manga will conclude with Laugh Tale Island, and we are sure the anime series will follow soon. But, it’s clear that we’ll still get plenty of anime for at least a year. Because the studios need time to catch up to the weekly manga publishings.

Until then, watch all the One Piece arcs in order and prepare for a new One Piece Movie as well.

Scorpio anime characters are passionate, intensive, and ferocious. They are perhaps some of the most mysterious characters compared to other zodiac signs. Scorpios can demonstrate...

Persona 5 Royal: Akechi Confidant – How To Unlock & Max Out?