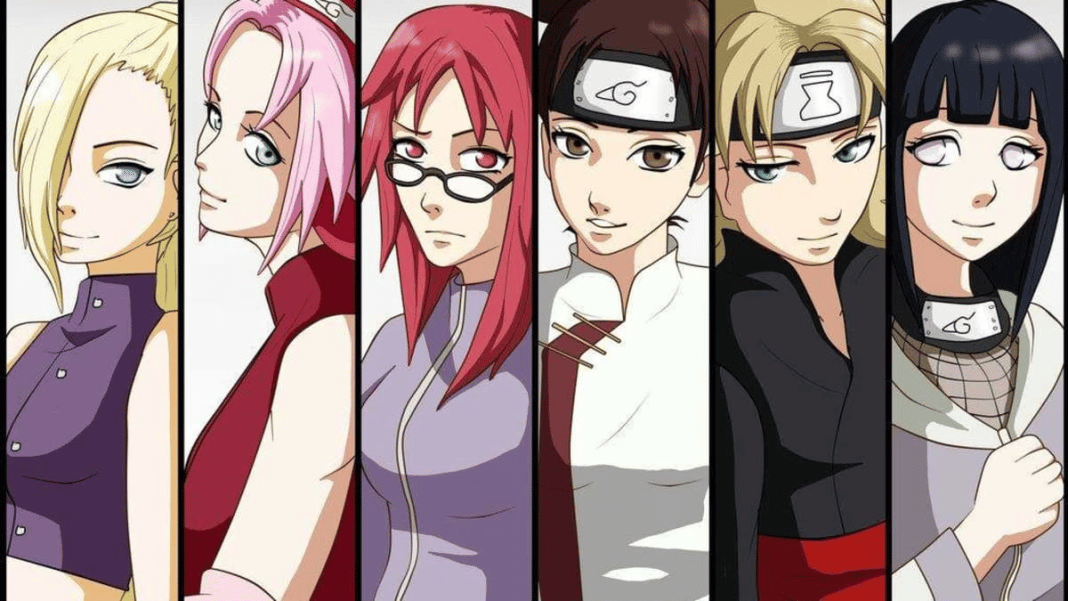 Naruto features some of the most gorgeous anime female characters around. However, Naruto females weren’t just meant to be damsels in distress.

Each of them has a rich storyline and abilities to hold its own.

In this post, we will walk you through our top 15 picks of the best Naruto female characters.

You can read the complete naruto character guides here.

We have ranked prominent Naruto girl characters based on their prowess, fan following, and their influence on the overall storyline.

I believe Rin Nohara’s storyline somewhat matches Helen of Troy’s. Both were the trigger for a great war. Rin was a chunin when she was kidnapped by a rival village and turned into a Jhinjuriki for the three-tailed beast.

That’s why she sacrificed her life so that the Hidden leaf village stands. When Obito saw Kakashi killing Rin, he held a grudge and sought revenge.

Decades later this hatred led to the great Ninja war.

Anko has been to the dark side. She was the disciple of Orochimaru. While training her Orichimaru took notice of her capabilities and later used her as a test subject for experimenting with forbidden Jutsu.

Later the Hokage puts a seal on her to prevent any further repercussions the experiments might have on her. Since then she becomes a trusted comrade of the Hidden Leaf village.

Tamari belongs to the Sand Village. She is Gaara’s sister and an exceptional Shinobi. I first noticed her abilities during her fight with Shikamaru, whom she later marries.

She uses the wind slash technique to cut her opponents, and there’s not much you can do about it. She cares for the unity among the villages and proves to be of great help during the Ninja wars.

One of the most noteworthy Naruto females for sure.

Karin is a descendant of the Uzumaki clan. Same as that of Kushina, Naruto’s mother. She was a member of Orochimaru, and after his downfall joins Sasuke.

She is a sensory-type ninja and can sense the presence of others from afar. She also has tremendous chakra reserve providing her immense longevity. That’s not all her blood can be used to replenish chakra.

And that’s precisely what Sasuke does, and bites on to her to fill up his chakra reserves before fighting Naruto.

Tenten is one of the most resourceful Naruto female characters. She has the ability to summon numerous weapons using her scroll.

In the first season, she doesn’t seem to be a polished ninja but picks up her craft in Shippuden.

During the Ninja war, she helps soldiers by supplying them with weapons to contain other Jinchuriki. She is beautiful, trustworthy, and lethal.

Konan is definitely one of the strongest Naruto women. She is the only female member of the infamous Akatsuki and was also a very close friend of Pain. This shows how skilled Konan really was.

She could control paper and mold herself in paper as well. She was also a disciple of master Jiraya, who was one of the legendary Sannins.

Ino is one of the prettiest Naruto girl characters. But don’t get fooled by her beauty. She is an exceptional shinobi trained in both sensory and medical ninjutsu.

Growing up she used to love chasing men, but when she grew up and found others around her excelling in their craft, she started taking medical ninjutsu lessons.

Using her sensory ninjutsu she can possess her opponents and render serious damage. During the Ninja war, she followed in her father’s footsteps and helped relay important messages using telepathy to all foot soldiers.

Mei is the fifth Mizukage. Despite her age, she hasn’t married yet, and that’s something that worries her a lot. She did a lot of work to improve diplomatic ties between the villages.

And in terms of her abilities, she can spit out acidic mud that can melt almost anything in its path. She was a crucial member of the 5 Kage summit and challenges Sasuke while he is on his way to kill Danzo.

Kushina is the mother of Naruto and the wife of Minato. Earlier she was the jinchuriki of the Nine Tail Fox. She sacrificed her life so that Naruto’s safe.

She was a talented Kunoichi, strong and outgoing. When Naruto’s seal that contained the Nine Tail was about to break, she appeared and reassured her and saved Naruto from completely turning into the Nine Tail Fox.

Of all Naruto women, she deserves respect like no other.

Yuhi Kurenai is a kunoichi who trained Team 8. She was the partner of the late Asuma Saratobi. She is a sensory-type ninja and took it upon herself to train Hinata.

Apart from being a highly skilled ninja, she has also mastered Genjutsu. Her illusion attacks mostly revolve around plants and trees.

It is said her Genjutsu skill is comparable to that of Itachi Uchiha.

Granny Chiyo deserves more recognition. She is one of the most righteous Naruto female characters. When she was introduced you can see her as an old woman quietly fishing in seclusion with her brother somewhere in the sand village.

Later it comes to light that she’s not only a renowned medical ninja but also a master puppeteer. She is the reason Naruto and his team got to defeat Sasuri and take their revenge on the first Akatsuki member.

She put her life on the line to keep Sakura safe and sacrificed her life to revive Gaara. That’s not all, she also imparted important information about Jinchuriki for the first time in Naruto Shippuden.

Even though Lady Tsunade is over 50 years old she doesn’t look her age. She is one of the most gorgeous Naruto female characters around. And if you keep her looks aside, she is also one of the Legendary Sannins.

Lady Tsunade possesses superior medical ninjutsu skills and saves countless lives with her skills. She also has freakish strength and no one wants to mess with her for the fun of it.

She does have a gambling addiction and is a borderline alcoholic, but she gets appointed as the Hokage of the Green Leaf Village purely based on her merits.

If you already don’t know, Hinata is royalty. She is the chieftain’s daughter of the Hyuga clan. But despite her legacy, she falls for Naruto who was considered an outsider and a nobody.

Gradually she works hard to hone her skills and develop her Palm technique with a little help and a lot of practice from her cousin Neji. She also possesses the revered Byakugan which lets her see a person’s chakra points.

When Naruto faced Pain, she put her life on the line to save him. She is one of the most favorite Naruto female characters.

Sakura was in Naruto’s and Sasuke’s team when they started studying Ninjutsu. Even though she was sharp she lacked physical prowess while growing up, but under the mentorship of Tsunade, she learned medical ninjutsu.

She is one of the most gifted medical ninjas. That’s not all, she also inherited Lady Tsunade’s superhuman strength being trained by her.

She truly loves Sasuke and was a pivotal character during the Ninja war.

Even though she might not be a fan favorite, Kaguya is definitely the strongest of all Naruto female characters. She is basically a Goddess who first wielded chakra by consuming the fruit of the God tree.

Talk about any special ability Kaguya has it all. She can absorb ninjutsu, teleport to a different dimension and even use the Rinnegan.

Later she merges with the God tree to become the ten tails.

What do you think of our list of top 15 Naruto female characters? Do let us know!

Just like Monkey D. Luffy is to be the King of the Pirates, Roronoa Zoro has been destined for greatness since One Piece started. The...
Previous article
Encanto Family Tree: Complete Genealogy of Encanto Characters
Next article
Naruto Characters: Ranking The Saddest & The Most Popular