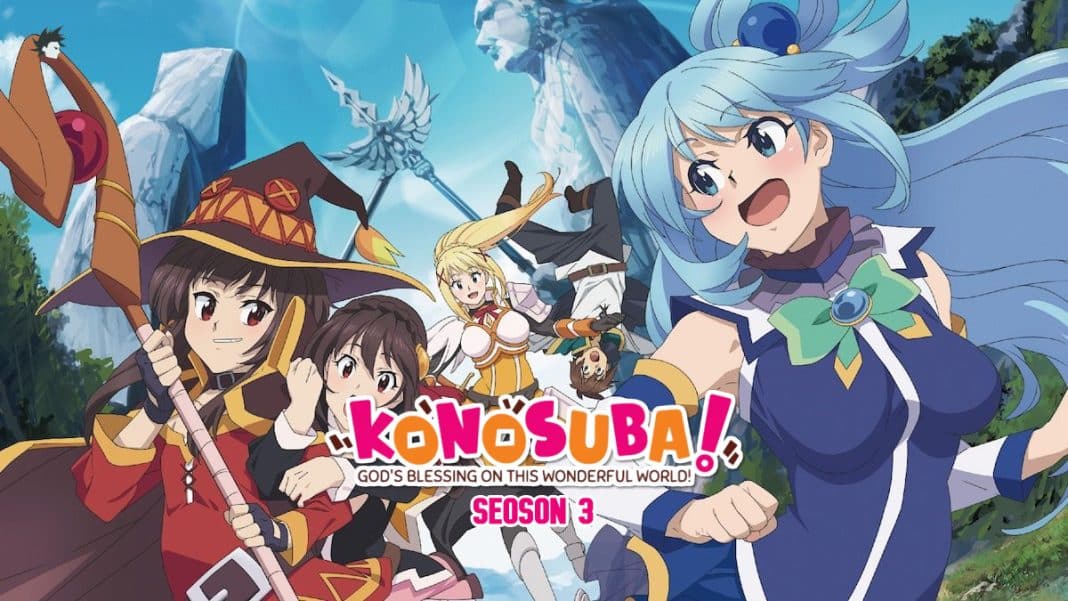 KonoSuba: God’s Blessing on this Wonderful World, also known as Kono Subarashii Sekai Ni Shukufuku Wo!, is a send-up and parody of the Isekai genre that blends key elements of magic, humor, and entertainment.

With its hilarious storyline and high-spirited characters, it rose to the ranks of the most popular Isekai series ever.

KonoSuba is an anime adaptation of Akatsuki Natsume‘s light novel series, which was illustrated by Mishima Kurone. The franchise has finished 17 volumes and has released two seasons and a movie to date featuring only the first five volumes.

So naturally, there is a long story to be uncovered in the coming seasons. But for now, we will dive into KonoSuba season 03 and will let you know the release date of the series that we have confirmed from official announcements. So let’s get started!

According to an official Tweet from Crunchyroll in May 2022, it was confirmed that Season 3 of KonoSuba is currently under production. And without any official announcement, we can only predict that Season 3 could premiere as soon as January 2023.

Along with the news of the 3rd season, Kadokawa (KonoSuba’s Media Company) also tweeted that a spin-off anime series, titled “KonoSuba: An Explosion on This Wonderful World,” is also under production and scheduled for airing in 2023.

While the official trailer of KonoSuba Season 3 is yet to be released, the official spin-off series trailer is available to gain more fan interest in the future series.

KonoSuba: An Explosion on this Wonderful World! | Official Trailer

KonoSuba is an isekai anime centered around a seventeen-year-old boy named Kazuma Sato who meets a tragic end following the actions of a fellow student and a truck incident.

As soon as he passes on, he is received by the lovely Goddess Aqua, who promises to retrieve him to another magical world filled with monstrous and other mythical creatures. With this promise by the goddess, Kazuma is given the option of taking anything with him to the next world to defeat a demon lord.

However, being the sharpest among the sharps, Kazuma selects Aqua herself instead of choosing any magical weapon. After acknowledging Kazuma’s cleverness, Aqua decides to tag along with Kazuma in the afterlife, and the two wind up making fast friends with a magician and a crusader.

The plot of the movie, Legend of Crimson revolves around a trip to Megumin’s hometown and a showdown with a general of the Demon King, Sylvia. Even after Sylvia fuses with two other generals to form a more powerful form, Kazuma and his party manage to defeat her.

Unfortunately, Kazuma and his crew suffer a setback during their encounter with the royal family and he becomes temporarily separated from the rest of them. The movie also concentrated quite a bit on the developing romance between Kazuma and Megumin.

So, the third season would most likely delve much further into these scenarios and we will see more of “Kazuma and his group” overcoming obstacles and battling Devil King generals.

Or, there might be a change in the story of any squad character, from receiving a marriage proposal to Megumin fleeing to her village. There’s no telling what will happen in the upcoming season.

One thing is certain, though: whenever something happens in KonoSuba, it’s bound to be funny.

It has been confirmed by official announcements and reliable sources that the production studio behind KonoSuba has shifted from Studio Deen to Studio Drive, which is also animating the upcoming KonoSuba spin-off.

Takaomi Kanasaki, who directed the first two seasons of the KonoSuba anime, has been promoted to chief director, and Yujiro Abe has been nominated as the new director for the coming seasons.

The new season also marks the return of Koichi Kikuta as character designer and Makoto Uezu as a composer. Further, “KonoSuba: An Explosion on This Wonderful World”, a spin-off series, will feature many of the same cast and crew as Season 3 and is expected to premiere in 2023.

For more series, check out High School Anime Series or 40 Dark Anime to get a more fantastical experience in your downtime!

In a generation where we have zombie movies, zombie games, zombie board games, zombie comics, and zombie books, the undead has never been more...
Previous article
One Piece Nami – The Backbone Of Straw Hat Pirates
Next article
Hunter X Hunter Season 7 – Official Highlights & Updates