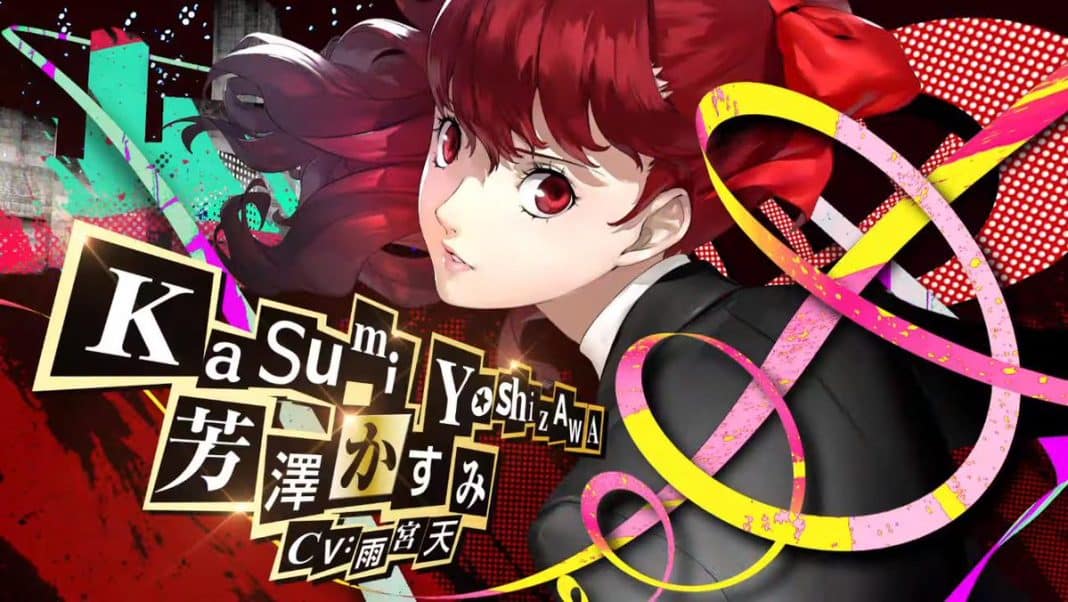 Kasumi Yoshizawa is another Persona 5 Royal exclusive character. She is a freshman at Shujin Academy and has a gymnastic scholarship.

The Faith Confidant of P5R is quite different from the rest. You have to complete a few requirements and there are a few time restraints that make Kasumi Confidant somewhat complex.

For instance, if you don’t get to a certain Rank by a particular day, you can’t progress Kasumi Persona 5 Royal Confidant any further.

But, if you stick to our guide, that won’t happen.

We’ll tell you how to begin her Confidant, when and where to meet her, and just about everything you should know.

So, let’s jump right in.

Kasumi Confidant will automatically initiate on May 30 after the field trip ends.

Afterward, you can only meet her at Arcade Street in Kichijoji. And here’s her availability schedule.

That said, some of her ranking events are time specific and accessible on specific days. We’ll mention those dates along with the Rank, so you don’t miss out.

Important Note: You need to get Kasumi Confidant Rank 5 by December 22. If you can’t, her Confidant will be locked out.

This is what it’s all about really.

With this cheat sheet, you’ll be choosing the highest point answer during every ranking chat. And in doing so, you’ll be flying through Kasumi Confidant ranks.

Note that the chats you don’t see here are non-rewarding. They do not affect the confidant, and you can choose any option.

And remember, keep a Faith persona with you to get the maximum points.

Rank 1 will be automatically completed on May 30 after you finish the cleanup field trip. There are zero points to be collected through chats, you feel free to pick any option you want.

On June 8, you can attain Rank 2 by giving the following answers.

Kasumi: It’s all about the harmony between the internal and external oblique muscles… I can’t get enough of it!

Best Response: +2. We’re just getting started./I’m so done with this.

Kasumi: I’m actually not doing so great at the moment, so I’m not sure I could manage anything too strenuous.

Kasumi: I was so relieved, I suddenly got really hungry… and then my stomach wouldn’t stop growling in my meeting.

Kasumi: And I figured something out! It’s this!

Kasumi: I made this specifically with your body type in mind, and knowing how much you exercise… Do you want it?

Kasumi: <Protagonist>-senpai? You okay? Your eyes are glazing over…

Kasumi: I’m so embarrassed… I thought it was so great when I presented it to you, and now…

Kasumi: I’ve been wanting to come here for a while, but I never had the chance to drop by.

Kasumi: Wow, those really work for you! You look so cool! What do you think?

Kasumi: But your input’s been really helpful so far! Would you mind poking around with me for a bit longer?

Kasumi: I don’t know how to describe it. It just seems perfect for my dad somehow.

Kasumi: The more I thought about it, the more… empty I felt. Like I wasn’t even me anymore.

Best Response: +2. We’ll work at it together.

Kasumi: And having your support makes me even more determined to make that happen.

Best Response: +2. We’ll work at it together.

Kasumi: And it suits him even better than I imagined! He was so happy with them!

At the earliest, Rank 5 becomes available on July 31. That gives you about 6 months to complete it.

Kasumi: Probably didn’t expect to be meeting me at the batting center, huh?

Kasumi: What do you think? That could work, right?

Kasumi: I did it, Senpai! I hit the ball!

Kasumi: I’d forgotten how it felt to work that hard on someone else’s behalf…

Kasumi: It’s nice to dip into sports aside from gymnastics. Was there anything else you wanted to try, Senpai?

After you get Rank 5, there’ll be a long wait before the Rank 6 event becomes available. And when it does, you’ll see Kasumi’s new persona- Sumire Yoshizawa. Kasumi turns into Sumire in January during the first visit to Maruki’s Palace.

On January 13, the Rank 6 event begins. It’s one of the longest events, but there’s just 1 rewarding chat.

Kasumi: …But this is the real me, I guess.

Kasumi: I’ll always be someone less than Kasumi. I’m just worthless after all…

Kasumi: Senpai, will you go out with me again?

Kasumi: It didn’t seem like you were struggling at all, though. You might be just as tough as Kasumi… Amazing.

Kasumi: I see. Well, I guess it’s important to have a balanced diet…?

Best Response: +3. Walk up to Sumire

Kasumi: I don’t even know if I’m worth showing off, let alone how to do it…

Best Response: +3. Try to stay positive./I’m here for you.

Kasumi: Um, what do you think?

Kasumi: Even if you didn’t like it… I don’t think that’d change how I feel about it.

Kasumi: B-By the way, where do you like to get your clothes from, Senpai?

Kasumi: Sorry for dropping in on you like this. I hope it’s not too much trouble.

Kasumi: And if you wouldn’t mind, I’d like you to be there when I do… Is that okay?

Kasumi: I talked about wanting you to see me, and how that helped me stop worrying?

Kasumi: Even as worthless as I am, I hope I still helped Kasumi somehow…

Kasumi: Th-There’s something I need to tell you, Senpai!

This is where you get to choose the future of your relationship with Kasumi. You can choose a Platonic relationship or go all out Lovers.

Kasumi: Um, but… The last thing I want to do is make you uncomfortable, so…

If you choose to remain Friends, you’ll get the following prompts.

Kasumi: Just watch me and I promise I’ll keep improving!

Kasumi: I really think I’ve matured. And I’m really glad for your part in that, Senpai.

And if you decide to become Lovers, you’ll get the following response.

Kasumi: Oh… what am I saying…?

Kasumi: It feels as if I’m constantly riding a rollercoaster… I don’t know what to do!

Kasumi: It’ll be you and me… and Kasumi. All three of us taking on the world as a team!

Kasumi: …as well as discovering what’s most important to me while performing.

Best Response: +3. Is it someone you love?

Kasumi: That’s why I want to turn this world back to how it used to be. I want to keep my promise with her.

Once Kasumi Confidant reaches Rank 10, regardless of Friendship or Romance, Kasumi’s persona will transform into the final form- from Cendrillon to Vanadis. And you also unlock Maria for fusions.

So, if you want to enjoy some exclusive content, better get started on Kasumi Persona 5 Royal Confidant.

You can also buy some gifts for Kasumi to really boost the relationship.

Just like Monkey D. Luffy is to be the King of the Pirates, Roronoa Zoro has been destined for greatness since One Piece started. The...
Previous article
Top 10 Food Wars Characters & Their Culinary Skills
Next article
Genshin Impact Manga: Everything You Need To Know