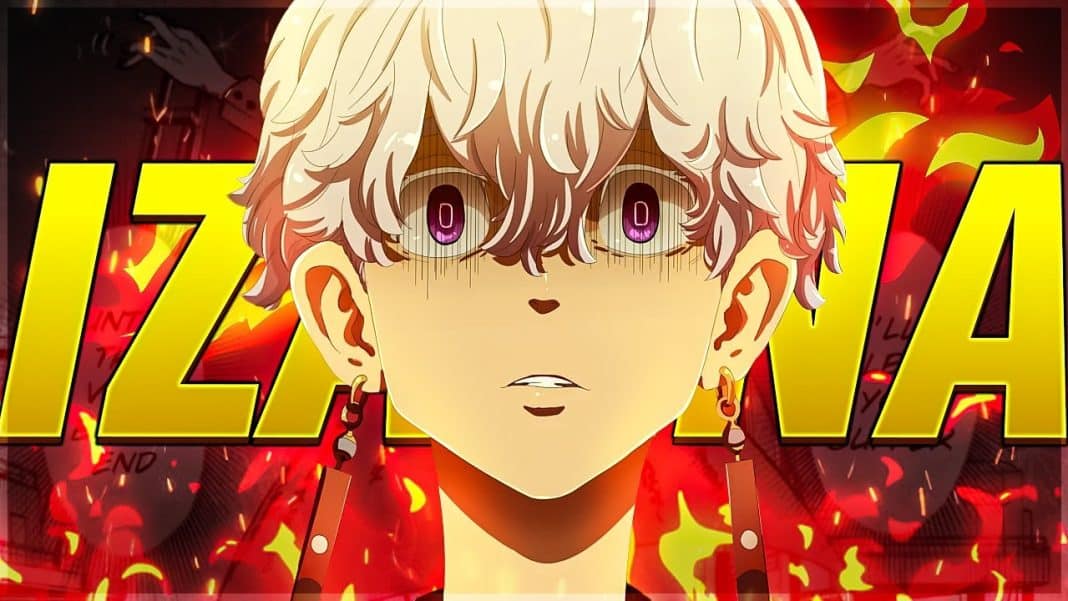 Those who only follow the Tokyo Revengers anime or saw the live-action movie might not know who Izana is. But the manga fans know him all too well.

Izana is an antagonist of Tokyo Revengers who has already left an impact on manga readers.

After a 1-on-1 battle with Mikey where Izana held his own, fans are excited to see him come to life. And we hope Season 2 gives us a first-look of Izana in Tokyo Revengers.

So, in anticipation, we’ve prepared this Izana Tokyo Revengers wiki page. Here we’ll tell you everything you should know about the strongest antagonist of Tokyo Revengers.

And let’s just say we’ve shared some stuff below that you should read before Season 2 hits the floor.

But before we start rambling on about Izana, here’s a little about the Tokyo Revengers anime that you need to know first.

One day, Takemichi Hanagaki finds out that his girlfriend from middle school, Hinata Tachibana, has been killed by the Tokyo Mangi Gang. That same day, someone pushes Takemichi in front of a train.

But, instead of dying, Takemichi finds himself transported to his life from 12 years ago. He is now in middle school, his only girlfriend is alive, and he remembers everything that has happened to him during these 12 years.

Now, he wants to change the horrible future that awaits Hinata. But, there’s more to consider.

Tokyo Revengers has gained a lot of popularity as a relatively new manga and anime series. Right now, the distribution rights are quite exclusive. So, the following platforms are your best bet.

You can also read the whole manga on readtokyorevengers.net.

Who Is Izana In Tokyo Revengers?

Izana Kurokawa is the founder of S-62 Generation. Izana was only 13 years old when he created S-62 Generation, and they started robberies, assault, kidnapping, and even drug trafficking.

This was one of the most violent and exclusive gangs with only 6 members- Izana Kurokawa, Ran Haitani, Kanji Mochizuki, Yasuhiro Muto, Rindo Haitani, and Shion Madarame.

And here comes the shocking part, Izana Kurokawa is the adoptive brother of Shinichiro, Manjiro(Mikey), and Emma Sano. Emma’s father had a Filipino mistress who gave birth to Izana.

But Emma and Izana knew nothing about it.

Mikey’s grandfather took Emma and Izana in as children. They were part of the Sano household now. But, Izana soon left.

He wanted to start his own journey, but he stayed in touch with Shinichiro because the two of them had developed a brotherly relationship. But that had a bitter end as well.

When Izana Kurokawa first appeared in the Tokyo Revengers Chapter 121, he was only 18 years old. Izana’s birthday is on 30 August 1987.

Also, Izana is half Southeast Asian. No one knows who his biological parents are. However, we do know that his mother was Filipino.

This gives Izana a distinctive appearance in Tokyo Revengers.

As the head of Tenjiku, Izana is mostly seen wearing the Tenjiku uniform- a collared red tailcoat with a black t-shirt underneath. The uniform also includes matching red pants and white boots. And to complete the look, Izana wears the iconic Hanafuda earrings.

We’ve also recently seen another Izana outfit on the Volume 17 cover where his outfit changes from red to black.

He can be seen wearing a transparent black tailcoat with a floral pattern all over. The white shoes are gone too. But, the hairdo and earrings stay the same.

Now that’s a look worthy of the most powerful antagonist of Tokyo Revengers.

Hate and jealousy are the 2 driving forces for Izana in Tokyo Revengers.

He wanted to be a good brother to Emma Sano and Manjiro Sano “Mikey”; he looked up to Shinichiro Sano.

Izana was very protective of Emma, but he left her behind for a journey of his own. While living alone in an unforgiving world, he soon realized that he has to become powerful. And that’s exactly what he did.

He started the S-62 Generation gang that had no morals. They just wanted power and were ready to do anything to get it. Soon, S-62 Generation ended and Izana started Tenjiku with one sole purpose- the death of Mikey and Toman.

However, a deeper analysis of his story tells us that he is not that different from Mikey.

He is a ruthless leader, a dangerous fighter with some dark inhibitions, and he would kill and die for his loved ones. But, his hatred for Mikey has outgrown every other goal.

Another similarity between Mikey and Izana is that they are both easy to manipulate. We already saw how easily Kisaki manipulated Mikey in Season 1. Izana, due to hate clouding his judgment, can sometimes fail to see through others’ plans.

And in the end, this brings about his downfall.

We labeled Izana as the strongest antagonist of Tokyo Revengers yet, and we are doubling down on it right here.

Mikey is the strongest character in Tokyo Revengers and has the best overall fighting skills.

But even though Izana’s fighting skills are not the best, he has still defeated stronger enemies and even proved equal to Mikey during the battle between Tenjiku and Toman.

And it comes down to one strength- Izana’s superhuman senses.

What Izana lacks in fighting skills, he makes up for it with his extraordinary senses. He can predict his enemy’s attacks and quickly counter them. These “senses” helped him injure Mikey as well.

Aside from this, Izana’s experience and authoritative attitude have helped him a lot. The things he learned while going through the ranks at Black Dragon helped him mold Tenjiku into a vicious gang he always wanted.

While he was the main man at Black Dragon, he had command over fighters stronger than him. The same goes for Tenjiku. But because Izana is smart, and has successfully built a fearful image, no one dares cross him.

Everyone fights for him, and that’s his biggest strength.

Izana was very close to Shinichiro and Emma. But, for some unknown reason, Izana left the Sano household.

Shinichiro would meet with Izana and they would go for bike rides together. One day, Izana told Shinichiro that he wanted to inherit Black Dragon. Shinichiro agreed but also warned him that Mikey wants the Black Dragon too.

Another day, Izana met Emma’s mother and that’s when he found out the truth, about his relationship with the Sano family.

He confronted Shinichiro who admitted that it was the truth and that he knew about it all along.

Learning that the brother he looked up to and the sister he cared for was not his blood broke Izana.

And after that, Izana ghosted everyone.

These 6 wreaked havoc in the detention center. And after coming out, they started the S-62 Generation gang.

Eventually, he became the 8th Generation leader of Black Dragon. This gave him the power and resources to create a bigger gang that could rule over Yokohama. So, he started Tenjiku.

After that, Kisaki Tetta enters the scenario and starts playing with Izana’s mind. What happens next is heartbreaking. And full of spoilers. So, we put the brakes on right here.

Tokyo Revengers Season 1 ended with the Valhalla arc. And Season 2 is already under production. And looking at the manga, we are all but sure that Season 2 will have the Tenjiku arc.

Since the Tenjiku arc is the longest Tokyo Revengers arc to date, we can expect a longer Season this time around. But the real thing is that we’ll finally get to see Izana in Tokyo Revengers.

And now that you know pretty much everything about Izana Kurokawa, will you be forward to him?

Hit us up in the comments!

Just like Monkey D. Luffy is to be the King of the Pirates, Roronoa Zoro has been destined for greatness since One Piece started. The...
Previous article
One Piece Dub: History, Mistakes, & Best Platform To Stream
Next article
Top 10 Aquarius Anime Characters Ranked By Aquarius Traits