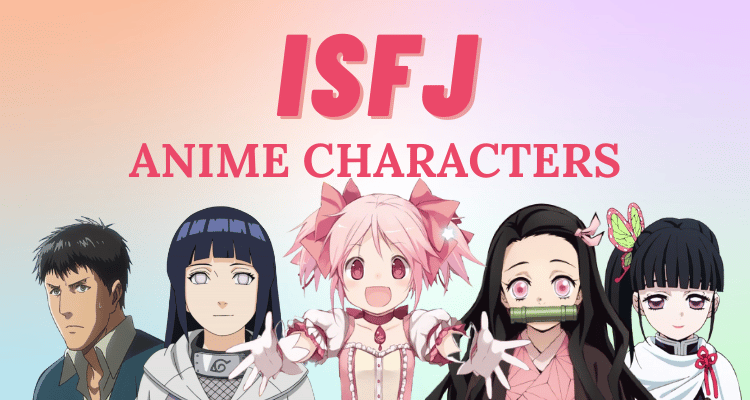 Compassionate, dependable, loyal, caring, and hardworking are some of the traits of ISFJ anime characters. There are many such ISFJ characters in anime that portray similar traits.

In this post, we have boiled down the list to 20 such characters from your favorite Anime. Read on and find out if your favorite series made the cut.

Hinatsuru is one of the wives of Tengen. But just because she is one of the 3 wives, that didn’t stop her from getting into the limelight.

She believed in Tengen’s philosophy of self-preservation and didn’t think twice before following his instructions.

As soon as they defeated an upper-rank demon, Hinatsuru ensured the four retreated from the battlefront.

Lan Fan is the personal bodyguard and subordinate of Ling Yao. While the mantra of others is absolute offense, Lan is entirely defensive in her pursuit.

She makes sure that their plan is spill-proof and doesn’t take damage as the situation worsens. She is a level-headed character and takes the protection of her team above anything else.

That’s why it’s dangerous for opponents to lock horns with her knowingly.

Inko is the mother of Izuku and makes sure that her child gets the best of things. She is timid toward Deku.

She loves her son very much and makes it clear that she doesn’t want to lose her son as he pursues to be a better hero.

She clearly propagates what a mother’s love is and how caring for her own means more than doing good for the world.

Shimura is an extremely lovable character. After his father’s death when he was still young, he took care of his sister and their family dojo.

Later he also faced the debt collector who wanted to collect the depth his father had accumulated.

When Takachin was being bullied he stood his ground. Even though he was beaten by them he didn’t flee and showed what the bond of friendship truly means.

My man Brock might not be hitting the right chords with women, but Pokemons do love him. While everyone is trying to be the best Pokemon trainer in the world, brock has his priorities straight.

He wants to be a Pokemon breeder and is damn good at it. All Pokemons that cross his path adore him.

This makes Brock one of the best ISFJ characters in anime.

Ennoshita is a level-headed left-wing spiker. His volleyball skills may be intermediate but his analysis lets him see right through his opponents.

His presence elevates his team’s performance. This is why he was chosen as the team captain for the coming years.

He is an all-rounder and is good at the offense as well as defense. He always kept his team’s goal ahead of his own.

Elizabeth seems like a textbook pacifist. She condones violence as much as possible.

But when her kingdom was on the line she had no choice but to give in to violence. Elizabeth was devastated by Meliodas’ death. But to give the people the best she can, she put up a smile and carried along.

She is a righteous individual and an idealist among other lead characters of Seven Deadly Sins.

Okuda may look like an evil scientist with menacing features. She is an introvert and not good at communicating her emotions to others.

That’s why she mostly seems rude and straightforward. But actually, she is a really sweet character. Koro-sensei taught her how to express herself properly and since then she became much more sensible and in tune with her inner emotions.

She started getting a ton of attention from fans after Karma mentioned that she is the kind of woman he wants to be with.

Kimimaro was the sole surviving member of the Kaguya clan. But when he heard his master Orochimaru was being insulted he neglected his deteriorating help and stood his ground.

Despite his poor health, he could stand toe to toe against Rock Lee who was using his drunken martial arts.

Later he succumbed to the injuries sustained while fighting Rock Lee and Gara defeated him. This shows his unwavering will and loyalty towards Orochimaru.

Haku is a descendant of the Yuki clan. He was a kind-hearted devoted shinobi who believed that a person can unravel his true power when they really want to protect someone they care about.

He was an apprentice of Zabuza and could perform freakishly strong Jutsu. Even though he was an antagonist in the first Naruto arc, he was just a product of his unfortunate circumstances.

If you keep his affiliation and actions aside, his motive and ultimate goal resonate with that of Naruto.

Tony Chopper has got to be the cutest ISFJ anime character on our list. He is a reindeer who ate a devil’s fruit and now has the power to interact with humans and other animals.

While growing up he got medical training from a good doctor and now he is the onboard doctor of the Straw Hat pirates. He is extremely loyal to Luffy and the crew.

Caesar is a supporting character in the series and made a stand for his brother. He is a hot-blooded individual but focused on his endeavors.

When he was young he and his sibling were abandoned by his father. This deep-rooted trauma fueled his rage over the years.

But later when his father sacrificed his life to save him from a trap, his hatred for his father turned into pride for the family name.

Ymir was the first person who got Titan powers. Due to this reason she was exploited, tortured, and tested by the king.

She knew that this is not an ideal way to lead a life. But desperate times call for desperate actions. And that’s why for the happiness of others she gave up her own.

She is one of the pivotal characters of AON and is quite responsible for what the series stands for now. It won’t be the same without her.

Koichi is a first-year high schooler who befriends Josuke Higashikata and that’s how he enters the world of Stand users. He is humble and has a ton of potential.

He is the only Stand who can use Echoes. He is quite friendly and polite towards strangers and has a gentle heart.

However, when he is angry he can become violent, aggressive, and extremely vulgar.

People might mistake Kasumi’s timid demeanor in the show and consider her to be weak. But the same qualities make her popular in the 4th dimension.

She is a side character who is humble and caring. But on the battlefield, she is a force to be reckoned with.

She wants to be a sorcerer so that she can use her skills to earn money and raise her brothers. She despises that due to her weakness others have to put their lives on the line to save her.

At first, Kanao seems like a quiet indecisive girl. She became like that because of all the abuse and hardship she had to endure while growing up.

She is a Demon Slayer from the Butterfly Mansion. Gradually she is able to embrace her emotions and not suppress it as a coping mechanism.

She cares deeply for Tanjiro and Nezuko which was evident after her battle with  Muzan Kibutsuji.

Yor is a complete package. She is simply stunning and equally intimidating in combat. She cares for her near and dear ones and is trying to raise a family of her own.

She can be intimidating and sentimental at times. She is an ordinary clerk and leads a secret life as an assassin.

In spite of her dual identity, Yor tries to be a better mother to her daughter.

Momo is one of the most level-headed and intelligent heroes in MHA, that’s what earned her the position of a leader. She is selfless and draws inspiration from others.

Even though she compares herself with others from time to time but that doesn’t interfere with her resolve and confidence.

She constantly pursues to be better and takes every competition she faces as a way to improve her capabilities.

She is the younger sister of Tanjiro. As a demon, she has extreme blood thirst.

But due to her love for her brother, she is able to counter her acute longing for violence and range and cater to him when in need.

For me, Hinata has all the best traits that an ISFJ character should have. She is an introvert, polite and humble. Growing up she wasn’t able to use her powers properly.

But when she saw Naruto’s never-give-up attitude in spite of all his shortcomings, she made it a point to try harder and be as strong as possible.

While Naruto was pinned by Pain, of all Hidden Leaf villagers, Hinata was the one who stood her ground and tried to save Naruto, knowing well that she would be crushed like a bug.

There you go. This is our list of the best ISFJ anime characters. What do you think of it? Can you think of any other character that deserves a mention here?

Extroverted, Intuitive, Thinking, and Prospecting. These are the traits of an ENTP person. We skimmed through the ENTP anime characters' personality database and ranked...
Previous article
Dr. Stone Season 03 – Coming Soon With More Action & Adventure
Next article
25 Chinese Anime That You Can Not Miss