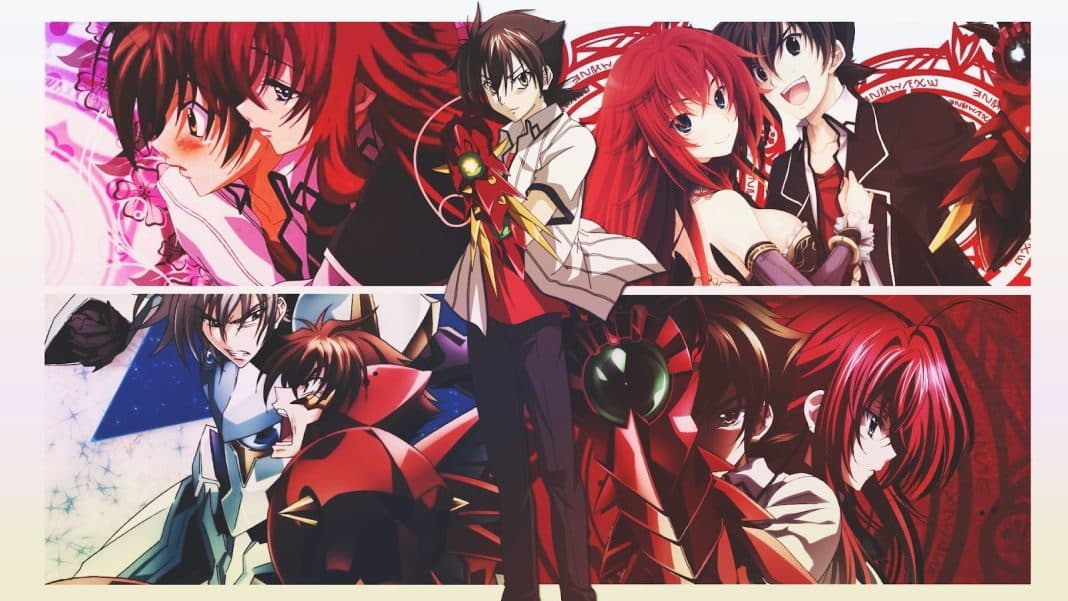 Fair to say, fans of the erotic-comedy-action hybrid have been waiting a while for the latest adaptation.

So today, we’re taking a look to see when High School DxD Season 5 is releasing, a brief rundown of the last 4 seasons, and some additional info about season 5 of High School DxD.

Other reports suggest it could be later, and releases sometime in 2023. However, there has been no official mention of a release date just yet.

Originally, High School DxD season 5 was scheduled to release back in 2020 but with the coronavirus outbreak, production hit a standstill. This was also confirmed by the author of the High School DxD Light Novels, Icheiei Ishibumi.

There were also some problems with the production studio which added to the delay. The anime has changed hands a couple of times already, which is a substantial reason for delays between the 4th and 5th seasons.

There is no official High School DxD Season 5 trailer yet.

Since there hasn’t been an official release date, this isn’t surprising. Check out the trailer for High School DxD Hero (Season 4) above, in case you’ve missed it!

For those of you who’ve got a High School DxD season 5 release countdown, don’t hold your breath. Delays are more frequent these days, especially for an ecchi anime like High School DxD.

If you still can’t wait though, check out the High School DxD light novels from the 11th and 12th volumes. Based on the current High School DxD seasons 1-4 that covered up to the 10th volume, it’s an accurate guesstimate for the next season.

What to Expect for High School DxD Season 5

While High School DxD started as a typical ecchi anime, it’s evolved to be more than that. Fight scenes are intense and captivating, humor and ecchi scenes are memorable, and the soundtrack is bumping.

But as the story progressed, we see darker sides to it with a plot you can actually get into. This isn’t usually the case for this style of anime, but High School DxD does it well.

With the events of Season 4 setting the stage for Rias’s and Issei’s relationship, we can expect this to be a major plot point. Issei and the team are also gearing up for the Middle-Class Promotion Test which will most likely be a main part of the story.

But for now, it’s hard to guess what exactly the anime will entail. These are mainly guesses based on the events of the last season and volumes 11 – 12 of the light novels.

It’s been a couple of years since season 4’s release so let’s take a quick look at the previous seasons. There’s been a lot of progression from all High School DxD characters so it’s a good idea to refresh your memory before the latest season.

We’ll share a quick synopsis from each season excluding the OVAs and Specials.

Quick spoiler alert, we will be going through the 4 seasons so avoid this section if you’ve missed any of them!

The first season of High School DxD starts with Issei Hyoudou, the quintessential anime pervert who lazes about all day. His goal in life is to one day have a harem of sexy women.

Eventually, he goes on a date with a beautiful girl, but it ends in tragedy as the girl turns out to be a fallen angel who for unknown reasons, murders him.

Thankfully, he’s revived by the most beautiful senpai in school, Rias Gremory, who turns out to be a high-ranking devil.

Issei is now her servant and helps to gain recognition for the Gremory household and Occult Research Club. This season sets a precedent for the world and its characters well.

This isn’t limited to just Rias, and we see the whole roster of anime girls scantily clad in hilarious, risque situations.

The second season, High School DxD New, continues with Issei keen on gaining the title, “Harem King”. However, this doesn’t last for long as his days of peaceful perversions are brought to a halt.

The Occult Research Club’s Vice-President, Yuuto Kiba, Rias’s Knight is going through some inner turmoil. It’s blatantly obvious something is wrong since Kiba is usually calm, collected, and reliable.

Issei soon learns of Kiba’s troubled history with the enigmatic Holy Swords. Kiba had been a part of barbaric experiments for which he wants revenge.

The Occult Research Club is once again embroiled in deadly battles against the Fallen Angels, the Church, and a hidden rival coming into the fray.

While it has darker undertones than the first season, you’ll still see glimpses of light-hearted comedy and ecchi scenes throughout.

After the intense battles from the previous season against Vali and the Chaos Brigade, Issei and the rest of the Occult Research Club take a breather which coincides with their school’s summer break.

This season is the typical ‘training’ arc to make up for the House of Gremroy’s weaknesses. To prepare for future battles, the Occult Research Club has a ‘training camp’ in the Underworld.

While they get stronger, Issei also has numerous ‘sexy’ encounters with the girls of the club. However, while they’re training, their foes are doing the same.

But be warned, the story here is a bit lacking and many fans skip the season altogether.

At the end of season 3, Issei and friends have rescued Rias from the Dimensional Gap and everything is back to normal. They return to the real world and their everyday life in high school.

Some of the team are going on a school trip to Kyoto and everything is fine and dandy. But during a visit to a temple, Issei is attacked by masked youkai and a mystical fox being.

After the dust settles, the group learns the nine-tailed fox tasked with protecting the city has been kidnapped and the Occult Research Club has taken the blame.

Issei and his friends embark on another adventure to save Kyoto from danger while keeping their school trip free from disaster.

Simultaneously, Rias who was left behind with a few other members worried about the perverted Issei being alone with the other girls. But fret not, there are multiple scenes that solidify their relationship (for the most part) that’s been built up throughout the series.

Season 4 makes up for the lacking High School DxD Born with updated, simpler visuals that work in its favor. Overall, a great watch for fans of the series.

We’ve reached the end of the latest High School DxD season 5 update and recap of all 4 seasons. Of course, there’s a lot we haven’t mentioned, but at least you’ve got a refreshed memory of the latest happenings in the anime.

But what do you guys think about High School DxD’s latest season? Will it drop anytime soon or will we have an even longer wait?

Hit us up in the comments!

Scorpio anime characters are passionate, intensive, and ferocious. They are perhaps some of the most mysterious characters compared to other zodiac signs. Scorpios can demonstrate...
Previous articleWho Is Yoriichi Tsugikuni in Demon Slayer? Unmasking The Slayer Who Scares Muzan
Next article7 Most Adoring & Cute My Hero Academia Characters [2022]