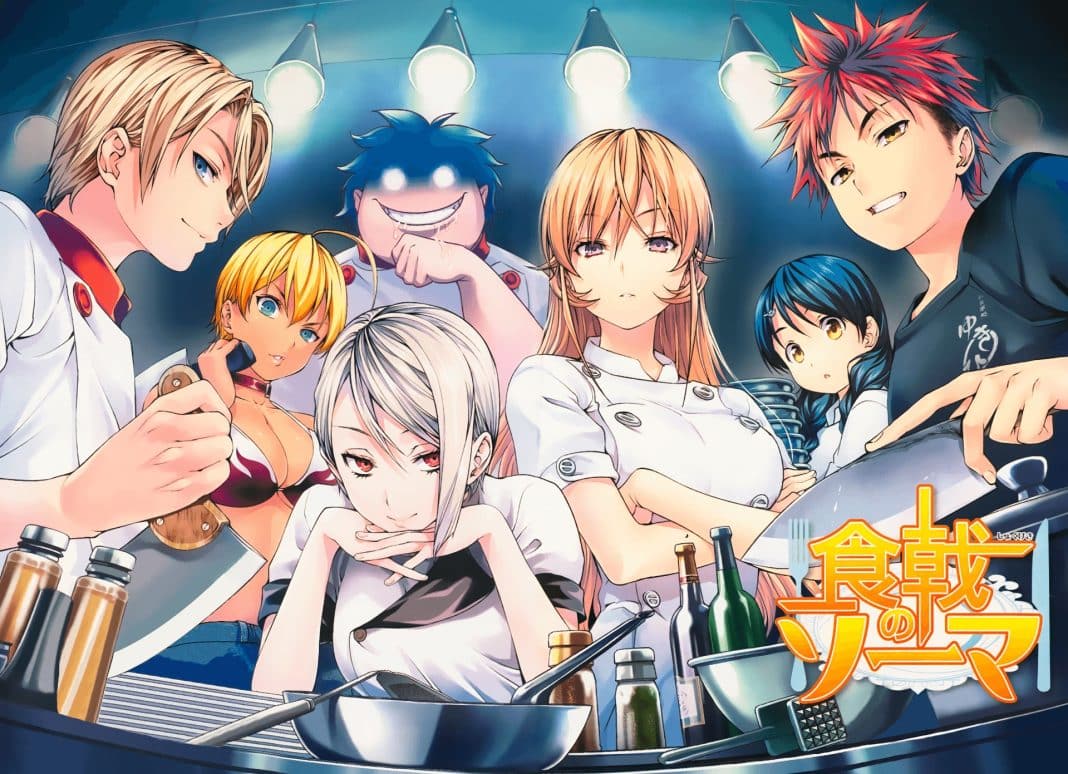 Food Wars (Shokugeki no Soma) didn’t start big enough. But after 5 seasons, it has generated a serious following in its very own niche!

The anime centers around Soma Yukihira, a middle schooler who is determined to prove himself a better cook than his father, Joichiro Yukihira.

With this ambitious desire, Soma enrolls in Totsuki, a prominent cooking academy, and meets other passionate chefs.

This blog will discuss these 10 main Food Wars characters and their inspiring role in the anime series.

Soma Yukihira is an energetic, creative, and cheerful protagonist who is determined to outdo his father, a world-famous cuisine expert.

Before attending Totsuki (Culinary Academy), he gained years of experience in preparing high-end cuisine dishes by working at his father’s restaurant, Yukihira.

Also, Soma is not hesitant to deviate from traditional recipes because he is both versatile and innovative in the kitchen. He can make dishes that are both surprising and delicious, something his superiors have never tasted before!

Erina Nakiri, the granddaughter of former Headmaster Senzaemon Nakiri, is the most powerful member of the Elite Ten Council and one of the main female characters of Food Wars.

Erina comes from a wealthy family and is a self-centered girl who expects only the best. She is one of the main characters in Food Wars mostly thanks to her “God Tongue,” which has earned her widespread respect in the culinary world along elite social standards.

Joichiro Yukihira is the father of the main hero Soma Yukihira, a legendary cuisine expert and a former member of the Elite Ten Council in the Food Wars.

Jouichirou stepped out of the Academy on Senzaemon Nakiri’s advice because of social pressures to stay at the top of Totsuki. But besides his incomplete graduation, his culinary skills are internationally revered.

Megumi Tadokoro, a young girl from a tiny port town in the Tohoku region is one of the most endearing and cute characters in Food Wars.

She is a confusing, shy, and honest girl who constantly maintains a lively demeanor. She is the type who looks out for others and is eager to help them if she can.

Megumi is talented, but she freezes up under pressure due to a lack of social exposure. However, Megumi’s confidence skyrocketed after her first Shokugeki, and she started to put her culinary chops on full display.

The Aldini brothers are supporting characters in Food Wars, but they are the most loving and wonderful brother combo from the Japanese-Italian family.

What sets them apart from other chefs is not just their Italian accent but also the breadth and depth of their culinary repertoire.

Among them, Takumi Aldini is the younger brother, a hot-blooded student who has a deep rivalry with Soma Yukihira.

On the other hand, oldest brother Isami Aldini is calm, tranquil, and even cheerful with others while sharing the same burning passion for cooking.

The twins have a special kinship and are always there to support each other.

Alice Nakiri is the maternal cousin of Erina Nakiri and one of the most adorable major characters of the series, Shokugeki no Soma.

Alice is also a member of the Nakiri family like Erina, but she isn’t arrogant and enjoys putting her skills on display to her competitors.

She is an expert in molecular gastronomy and highly values the science and the art of cooking. According to Alice, having knowledge of ingredients and understanding their chemistry are the two most important qualities of a modern cook.

Ryo Kurokiba is one of the mysterious, powerful main characters and plays rival to our protagonist Soma Yukihira. In addition to being Alice Nakiri’s assistant, Ryo occupies the 5th seat on the Elite Ten Council.

Ryo is typically stress-free, unresponsive, and pensive. However, a more passionate side of his personality (Berserk Mode) emerges when he wears his trademark bandana or other forms of tight headgear.

For Ryo, a chef’s sole purpose is to force diners to eat what they’ve prepared!

Eishi Tsukasa, popularly known as “The White Knight of the Table“, is highly regarded by the other students and members of the Elite Ten.

He is hostile and self-critical, but no matter what he cooks, his exceptional expertise and vast knowledge bring out the best in the ingredients.

Before Soma Yukihira, Eishi Tsukasa was the 1st seat of Elite Ten members.

Terunori Kuga, a sophomore at the time, is the first surviving elite council member to make an appearance among the new council members of Totsuki.

He is the president of the Chinese Cuisine RS and has a keen understanding of how to use spices.

By the time of the Régiment de Cuisine, Terunori’s skills had progressed to the point that he could prepare classic French dishes with Chinese techniques.

Ikumi Mito is a student of the 92nd Totsuki Generation as well as a member of the Don RS. Before her loss in a Shokugeki against Soma Yukihira, Ikumi was one of her opponents. Earlier, she was acquainted with Erina Nakiri, but after the contest, she decided to side with Soma.

Even though Ikumi typically uses beef in her dishes, she has also cooked using chicken and pork.

Extroverted, Intuitive, Thinking, and Prospecting. These are the traits of an ENTP person. We skimmed through the ENTP anime characters' personality database and ranked...
Previous article
All One Piece Arcs In Order – Sagas, Specials, & Movies
Next article
Kasumi Persona 5 Royal Confidant – How To Initiate & Rank