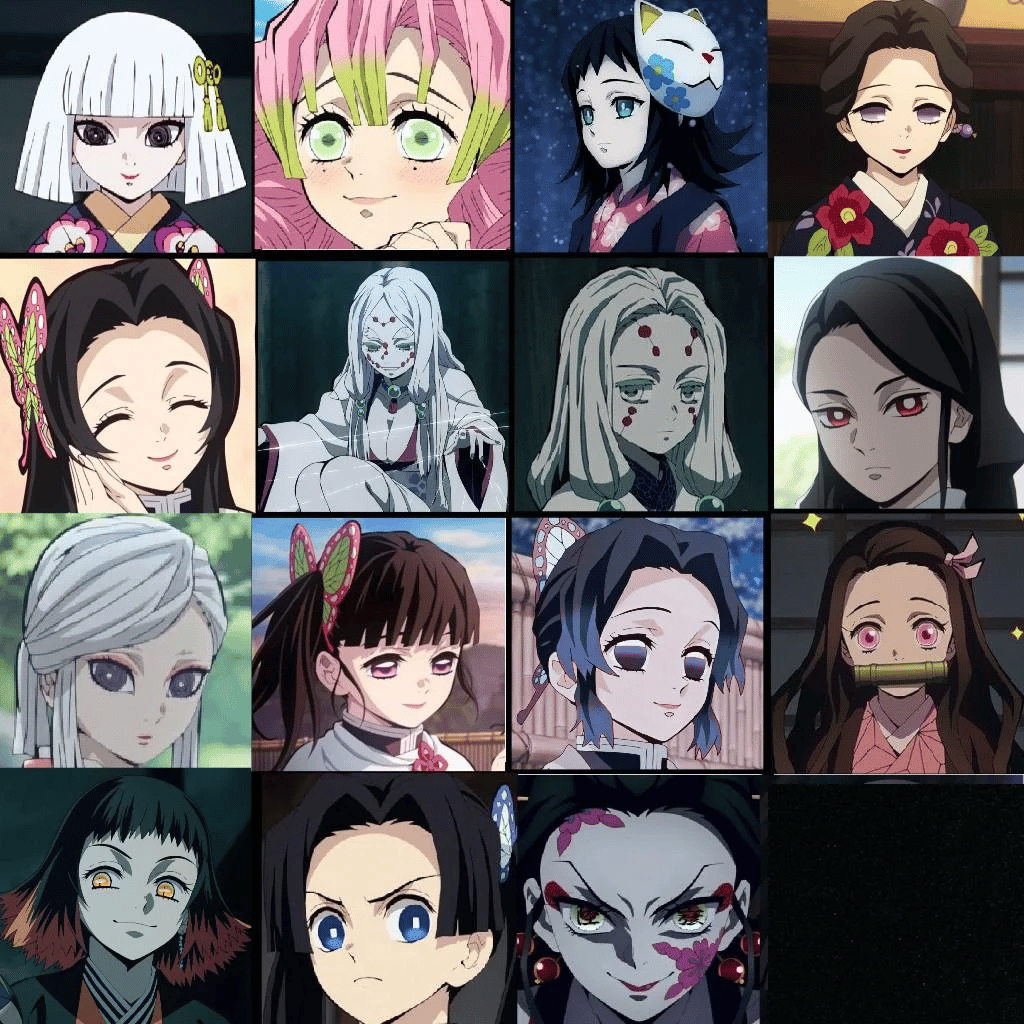 The Demon Slayer anime and manga feature multiple female Demon Slayer characters. Some of them are a sight to behold. A few of these girl characters possess superhuman strength and other special abilities.

Based on their skills we have created our list of top 10 Demon Slayer female characters. Check them out!

Who Are The Female Characters In Demon Slayer?

You can find notable female Demon Slayer characters from different backgrounds. Right from Amane Ubuyashiki who is the wife of Kagaya Ubuyashiki, to Mitsuri, & Shinobu who are the Hashiras of the Demon Slayer Corps.

Kanao is one of the female Demon Slayers, and there are many female lower and upper-class demons too.

The anime and manga also feature various Demon Slayer girl characters from the entertainment district, the Kamado family, and the Butterfly mansion.

Even though Makomo’s powers weren’t revealed, Sakonji permitted her to enter the Final Selection. She was doing fine under Sankonji’s training until she encountered a morphed Demon.

Makomo had advanced knowledge of Water breathing techniques and taught Tanjiro how to apply all its forms.

Aoi was trained by Shinobu Kocho. She resides at the Butterfly estate and helps other Demon Slayers with her simple remedies. She was a Water Breathing style practitioner and used it during her Final Selection.

She can best ordinary demons and is known as the Mizunoto. Despite her talents, she is honest and strongly believes she passed the Final Selection out of sheer luck. That’s why she gave up her training and started helping others in the Corps.

This demon was just getting started. That’s why she has to make conscious efforts while imitating others’ physical features. Even though the Spider Demon daughter was able to change herself to match Rui, she quickly reverted to her original form.

This happened because she was frightened and didn’t have much practice with her technique. In the end, she was defeated by the Insect Hashira.

She is a lower rank four demon. Despite her strength, she is well aware of the killing capabilities of the demon slayer corps and thus avoids facing them.

When Muzan finds out about Mukago’s cowardly nature, he kills her.

She possesses advanced shape-shifting and transforming abilities. She can alter her hair length and color, facial structure, demon marking and even eye color. All in all, she is like a demon chameleon with all the abilities of a spider.

She can also attack in stealth by creating small white spiders with red dots. These spiders look just like her and she can command them to attach threads to their victims.

Once Nezuko became a demon she could shrink herself. That’s how she was able to travel with Tanjiro during the day in a small box. On the flip side, she can even enlarge herself while fighting other demons.

She can also turn her blood into flame and also decide how deadly her blood should be. Any damage caused due to her blood can be reversed by her too.

Nezuko ignited her blood and used it to turn Tanjiro’s blade from black to red. This increases the blade’s effectiveness and offense against demons. When the Nichirin blade is red Tanjiro’s Fire God Dance becomes more effective.

Kanao had to endure a lot of abuse before being adopted by Shinobu and Kanae Kocho. This is one of the reasons why she’s mostly indecisive. However, when it comes to her abilities, she is for sure one of the most dependable female Demon Slayer characters.

She possesses keen eyesight to the level that she can figure out her opponents’ movements by reading fine twitches in their muscles. This way she can counter their attacks easily and predict their moves.

She also has control over her physical functions. For example, while fighting Doma she stopped her breathing to prevent her lung from freezing. That’s why she could challenge Doma in hand-to-hand combat without damaging her lungs.

Mitsuri is the Hashira of love. She is emotional and passionate but strong. She has superior muscle mass compared to normal humans with thin limbs. Such traits provide her with great agility, strength, and enhanced reflexes.

She can easily withstand attacks from lower-class demons. But to stay in shape she has to consume a lot of food, equivalent to 3 sumo wrestlers.

Mitsuri used a thin and flexible sword, quite difficult to maneuver for others, but not her. It complements her fast reflexes. After she awakens the Demon Slayer mark, her speed increases ever more surpassing the Sound Hashira. She is definitely one of the stronger Demon Slayer girls.

Nakime fights more with her brains than her muscles. Even though she doesn’t possess any martial arts abilities, she can control an entire fortress as if they were an extension of her.

By playing her Biwa, she can manipulate numerous interdimensional fortresses and lead her opponents to places by manipulating their entries and exits.

After receiving blood from Muzan, she could spy on others throughout Japan. This is how she discovered the hidden mansion of Kagaya Ubuyashiki. Definitely one of the strongest Demon Slayer girls.

Daki is so powerful, that even Muzan referred to her as a special demon. She overpowered Nezuko, Inosuke, Tanjiro, and Hashibira without breaking a sweat. She is one of the Supreme Moons out of the twelve Moon Demons and owes her position to the augmented powers of her brother.

Who Is The Strongest Female Demon Slayer?

Daki is the strongest of all female demon slayer characters.

But even though Daki is the strongest, she’s a demon and not a Demon Slayer.

So considering this little technicality, Mitsuri Kanroji and the Love Hashira is the strongest female demon slayer. Kanao Tsuyori would be a close second especially because of her keen sight and ability to react to her opponent’s muscle movements.

Extroverted, Intuitive, Thinking, and Prospecting. These are the traits of an ENTP person. We skimmed through the ENTP anime characters' personality database and ranked...
Previous article
Eren’s Founding Titan Form Explained: All You Need To Know
Next article
Goth Mikasa & Nerd Armin In Attack On Titan: More Than An Easter Egg