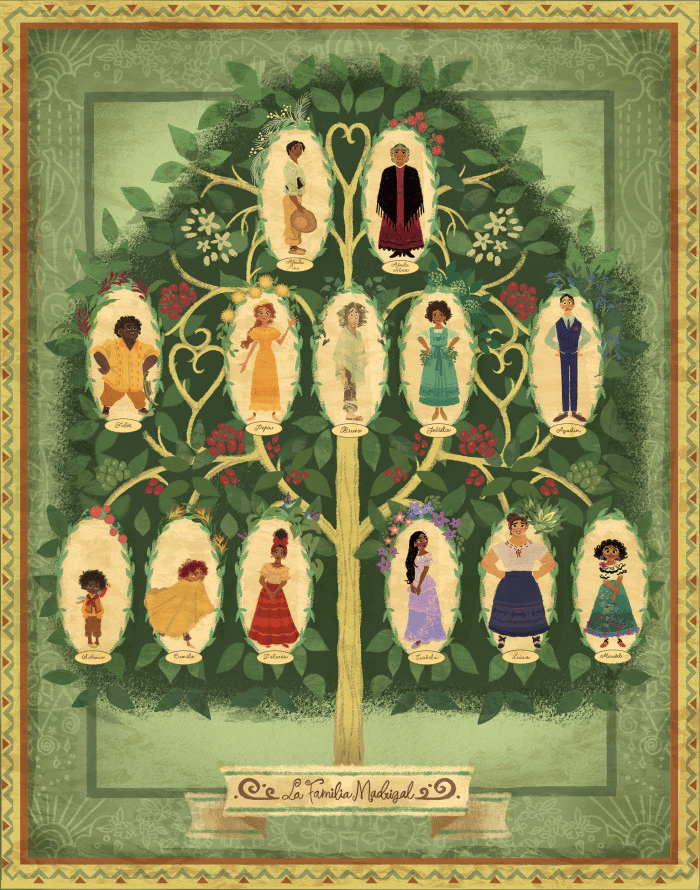 Released in November 2021, Encanto is the newest addition to the canon of classic Disney productions.

Encanto is a beautiful town tucked away in the Colombian mountains where the Madrigal family resides; almost all of them have been endowed with some sort of magical ability, some fanciful and some more mundane.

Only Abuela and Mirabel do not have any magical abilities but we’ll come to that later.

Now, let’s go over the Encanto family tree and really know the relation of all characters with their respective ages!

Given that there are 13 Madrigals, we start with Mirabel and work our way out to explain the various rapports between each of the family members. This is the Madrigal family –

The Encanto film features around 13 members of the family, each with unique abilities and a specific position in the household. Here is a table about all specific information about the Encanto family members:

All About Encanto Characters

Abuela, or Alma Madrigal, is the 74-year-old matriarch of the large Madrigal family. Despite any magical abilities herself, she has taken on the huge responsibility of leading the large Encanto family and serving as the leader of the hamlet of Encanto.

She protects the mystical flame that grants its power to her descendants and her grandchildren.

The Madrigal family was headed by Pedro Madrigal. He was the grandfather of Mirabel and the husband of Alma.

At the beginning of the film, he gives his life to protect his loved ones from a group of barbaric soldiers, which in turn bestows magical abilities on his loved ones.

Julieta is Alma and Pedro’s oldest daughter and is 50 years old. She is a mother to Isabela, Luisa, and Mirabel and possesses healing powers that she can use in her cooking.

Julieta cares deeply for Mirabel because she knows how difficult it is to be the only non-magical child of a magical family. She also values family above anything else and works hard to keep them safe and healthy.

When it comes to the Madrigal family, Bruno is an outcast mostly due to his pessimistic outlook on life. The Madrigal family disowned him after he started having visions, acted strangely, and kept rats as pets.

However, Bruno never left the house and was living behind the walls of their family house all by himself, unknown to almost everyone else.

He wasn’t precisely well-liked by the locals at first, but once they saw how much he cared about his family, they did warm up to him.

Pepa Madrigal is the daughter of Alma and Pedro, and is 50 years old. She is married to Felix and is the mother of Antonio (the youngest family kid), Camilo, and Dolores.

To match her nickname, she is considered as “overly emotional” and can influence the weather based on her mood. However, in spite of her mood swings, she is a loving person and cares a lot for her family.

Félix Madrigal is the husband of Pepa Madrigal and is noticeably larger than the rest of his family. Felix, like Agustin, isn’t a Madrigal by blood and hence doesn’t have a gift but is known to be a perfect match for Pepa.

When Pepa is feeling overwhelmed by worry or stress, Félix is there to provide a sense of calm and stability with his energetic joyous personality.

Not a Madrigal by blood, Agustin has no special abilities. But because he managed to win over Julieta’s heart, he was able to marry into the family.

As the family’s accident-prone member, he unwittingly helps his wife hone and improves her healing abilities.

The eldest of Agustin and Julieta Madrigal’s children, Isabela Madrigal is 22 years old and is the apple of everyone’s eye. She has been given the nickname “Senorita Perfecta,” which is a perfect reflection of her extraordinary abilities.

Through her magic, Isabela can grow plants anywhere and blossom them at will. She cares about her family so deeply that she would give up her own happiness if it would help them.

Pepa and Felix Madrigal have only one child, and she is Dolores Madrigal. As compared to others, Dolores has a very different personality; quiet and secretive.

She has exceptional hearing power that allows her to listen to all the secret gossip of the house but she never breathes a word to others.

A reference to Luisa as “the rock of the family” is both metaphoric and literal. The reason for this is that Luisa possesses superhuman strength. She uses her muscularity to pursue a career in bodybuilding.

The people of her village and her family count on her, therefore she takes her position as a protector of both very seriously.

Luisa may look tough, but she has a tender side that shows when she talks about her favorite animals: donkeys, unicorns, and hummingbirds.

Mirabel Madrigal, the protagonist of Encanto, is the youngest daughter of Julieta and Agustin and is 15 years old.

She is the only member of the Madrigal family who does not possess a superpower, making her a standout and a unique member of a family full of extraordinary people and abilities.

She is, however, quite quick-witted when the chips are down. When the town’s magic was threatened, Mirabel, despite her lack of mystical abilities, was the hero who saved the day and protected the place she and her family treasure.

Camilo Madrigal, son of Pepa and Félix, is the 15-year-old joker of the family. It’s easy to empathize with Madrigal as a teen because he’s much like us: a confused kid who tries on a lot of different trends before finding what works for him.

Camilo is a natural performer, and his ability to change appearance allows him to engage in pranks and other dramatic antics typical of teenagers. He is a caring sibling who loves his family despite his reputation as a restless child.

Antonio Madrigal is the 5 year old son of Pepa and Felix Madrigal. Since he is the youngest child of the family, Antonio gets extra attention and affection from his siblings and cousins, just like any other innocent child.

Antonio’s magic allows him to communicate with birds, animals, and other wildlife. However, Antonio suffers from social anxiety and is unable to overcome his stage fright.

We’ve also taken a more extensive look into all Encanto characters beyond this family tree in case you’re up for that!

Just like Monkey D. Luffy is to be the King of the Pirates, Roronoa Zoro has been destined for greatness since One Piece started. The...
Previous article
Demon Slayer: Suma & The Tail of Sound Hashira
Next article
15 Most Popular Naruto Female Characters, Ranked [2022]