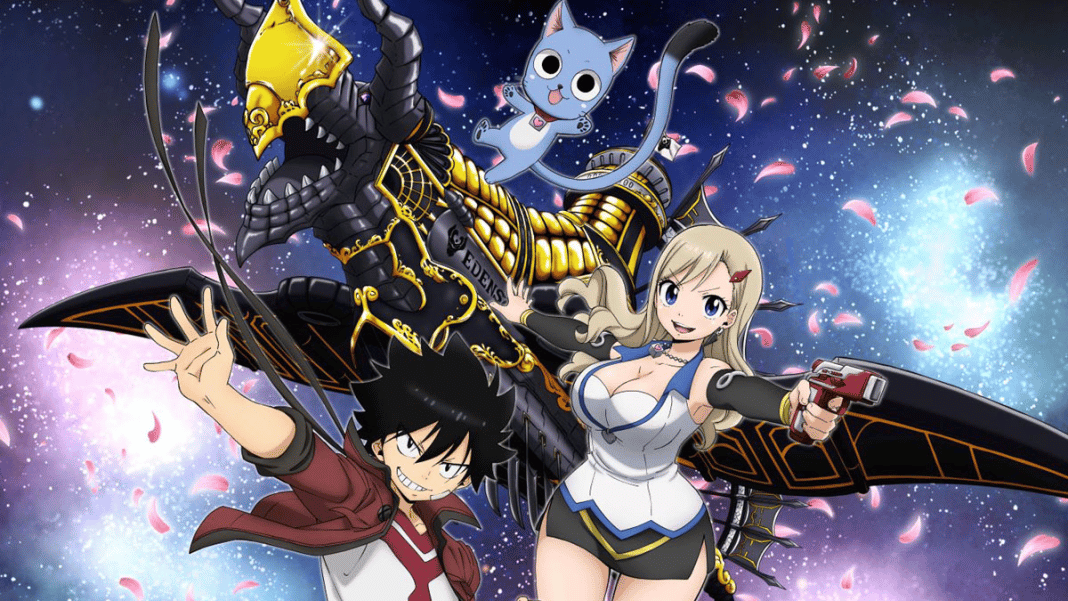 Edens Zero is a Netflix original anime series written and illustrated by none other than the famous writer of Fairy Tail, Hiro Mashima. If you have been looking for updates about when Edens Zero Season 2 is coming, you’re on the right page.

Unlike Fairy Tail, Edens Zero is a science fiction anime with space and fantasy elements. Furthermore, it is a fast-paced anime with no filler episodes but has an interesting storyline.

At first, it has the same classic “power of friendship” theme but things become serious and more flashy with every new episode.

Being the successor of Fairy Tail, Edens Zero has proved to be a successful anime series with another season coming in 2023. So let’s find out when Edens Zero season 2 will be coming out and what story will the next season unfold.

Recently, a Edens Zero season 2 teaser video did release, showcasing some new scenes along with a possible premiere date of April 2023.

The trailer also shows off some new space arcs of the coming season which will apparently pick up right where the first season left off. So there is no doubt that the 2nd season will be more action-packed and fire up the whole audience!

The official confirmation of Season 2’s production was given in Weekly Shonen Jump Issue 11 (2022), which was released in early February. The official Twitter account also made the announcement on February 8, 2022.

The first season of Edens Zero, an anime produced by Netflix and animated by J.C. Staff Studios, released on August 25. The protagonist of EDENS ZERO is Shiki, an orphan who has spent his entire life at a deserted park in a world called Grandell.

After encountering Shiki on one of his travels, the Demon King brought him to Grandell to raise him as his own grandchild. And Shiki, who has only ever had robots for company, is taken aback after meeting with B-Cuber Rebecca and her companion Happy.

After it, when the robots demand Shiki to depart the planet before their batteries die, he tags along with Rebecca and Happy and travels in search of Mother, the legendary cosmic mother goddess.

Along with it, when Shiki’s grandfather dies, he leaves him the EDENS ZERO, a spaceship capable of space combat, and the Gravity Ether Gear, which gives him gravitational powers.

In Edens Zero Season 2, Shiki Granbell, Rebecca Bluegarden, and Happy the Cat will continue their quest through the stars to find Mother, the mythical goddess of the cosmos.

From a total of 22 volumes of manga published as of August 17th, only the first 8 were adapted in Edens Zero Season 01. Since there are still 14 volumes of manga for anime, it’s likely that the next season will be divided into two parts with 7 volumes in each part.

Furthermore, season 02 will adapt the manga beginning with chapter 69 where the “Belial Gore Story” arc is introduced. The EDENS will appear as Shiki, Rebecca, and Happy as they travel to the Sakura Cosmos, where they will be pursued by Drakken Joe’s stronghold, the Belial Gore.

Why Edens Zero is An Anime Like Few Other

Hiro Mashima is a well-known mangaka, famous for his works such as Rave Master and Fairy Tail. His latest series, Edens Zero, has been adapted into an anime series that can be watched on Netflix.

Edens Zero has a cast of characters that will look familiar to viewers of Mashima’s prior works. Some of these designs bear a basic resemblance to earlier characters, while others are identical duplicates of famous past characters.

The fact that so many of Mashima’s characters have the same design invites the obvious conclusion that the author was too lazy to change it.

Because creating original artwork for each series is time-consuming and difficult. Therefore it’s more practical to recycle concepts from earlier projects. Even though this is a possibility, there may be further explanations.

And Mashima isn’t the only well-known manga artist who reuses characters from their own works. Osamu Tezuka, the man responsible for the Astro Boy series, has repurposed characters in his various works. This method eventually came to be known as Osamu Tezuka’s Star System.

If you’ve already seen Fairy Tail and Edens Zero, you might be looking for more similar anime to watch. Here is the 35 Best Crunchyroll Anime Collection where you can find top action-packed adventure anime to binge-watch. Or maybe the 40 Best Anime on Hulu are what you need right now!