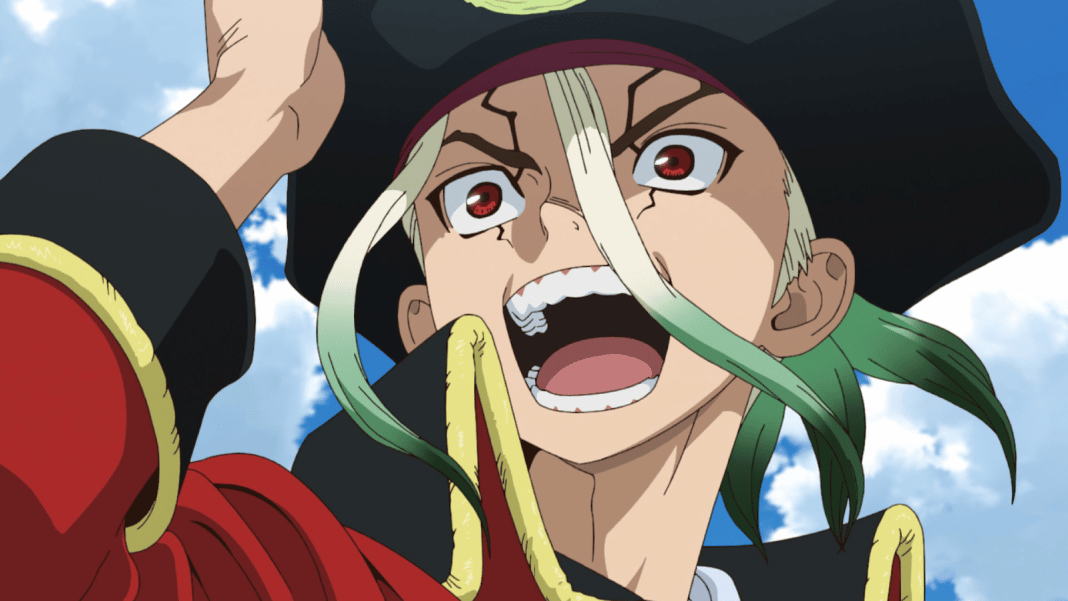 Dr. Stone is an iconic anime that reflects the development of science over the centuries and was created by Riichiro Inagaki and Boichi in 2019. The anime is based on a post-apocalyptic world where humanity has been petrified by the emergence of an unknown light.

However, after passing thousands of years (3718), the petrified Senku Ishigami and Taiju Oki abruptly broke out alive from their petrification and began to discover the cause of this unknown disaster and rebuild society.

Dr. Stone Season 03 promises to go back in time and reveal the truth about what caused the petrification. The new season might also give us a glimpse of time and space.

The question is whether Season 3 will show us what caused the apocalypse or whether it will be a new turn in the story instead! Here’s all that we know so far.

Almost immediately after the conclusion of Season 2, it was confirmed that there would be a Season 3. And on July 10, 2022, a teaser trailer was revealed, confirming that Season 3 of Dr. STONE will premiere in April 2023.

In the first 2 seasons of Dr. Stone, we saw the birth of the Kingdom of Science and its war with the Imperial Power. But fans, including me, are looking forward to what actually caused the petrification of the whole world and how things will be back to normal!

The production of Season 3 will be supervised by TMS Entertainment, an anime studio well-known for its animation work on other series like “Case Closed,” “Lupin the Third,” and “Fruits Basket.”

The studio has not yet revealed how many episodes will be in Season 3. But since Seasons 1 and 2 have 24 and 11 episodes respectively, Season 3 will probably feature 20 episodes or more due to the length of the upcoming story arc.

In addition, there is a great deal of material to cover, as the anime still has over 150 unanimated chapters to get over. They say there’s something for everyone in the forthcoming season of manga, and that’s exactly what fans are reporting.

Spoiler Alert: What is Season 03 All About?

The Age of Exploration arc (and perhaps the Treasure Island arc) will be adapted for Season 3 of Dr. Stone, New World. With Chapters 83–138, both arcs begin where Season 2 left off in the manga.

Next, there will be a joint shipbuilding effort between the Kingdom of Science and the Empire of Might in Season 3 and a new adventure to discover what caused the petrification.

To shed more light, many useful discoveries will be made in the Kingdom of Science, which will aid its development. New information about their post-apocalyptic, petrified world will be revealed during this season, driving the story further.

Moreover, you might meet new characters and learn about a different post-petrification society living on another continent!

The anime is adapted from the Dr. STONE manga by Riichiro Inagaki (Eyeshield 21) and Boichi (Sun-Ken Rock) and has sold 12 million copies as of February 25, 2022.

The collaborative dynamic between the two creators is fascinating. Korean-born Boichi-San is not a natural Japanese speaker, but he nonetheless set out to become a foreign mangaka.

If you’re a manga fan and you only speak English, head on over to the Viz Media website. For each translated series, they offer free access to the first 3 chapters and the 3 most recent chapters.

The Dr. STONE anime, like many other adaptations of manga, makes certain alterations to the source material. TMS Entertainment shortened the runtime by cutting out unnecessary dialogue but stayed true to the original premise.

Most notably, in Chapter 1 of the manga, former U.S. President Donald Trump is not reflected as part of a flashback of people being turned to stone. TMS Entertainment chickened out and cut the segment, which was a missed opportunity given the requirement to cast an actual Trump with recorded lines.

The average number of chapters adapted to every episode is two, with Dr. STONE Season 2 Episode 10 adapting slightly more than three.

For Dr. Stone, this is a great place to pause as Chapters 83 and 84 illustrate the fallout from the conclusion of the Stone Wars in Chapter 82 and hint at what Season 3 of Dr. Stone may entail.

So far, Dr. Stone’s anime series and manga have been fascinating science-fantasy and fiction series with a strong story plot. Moreover, the coming seasons seem to be more thrilling!

So for more new captivating blogs and anime info, keep following us, and don’t leave without sharing your thoughts about Dr. Stone season 03 in the comment section 😉

Just like Monkey D. Luffy is to be the King of the Pirates, Roronoa Zoro has been destined for greatness since One Piece started. The...
Previous article
Vinland Saga Season 2 | Release Date & All Updates So Far
Next article
20 Best ISFJ Anime Characters