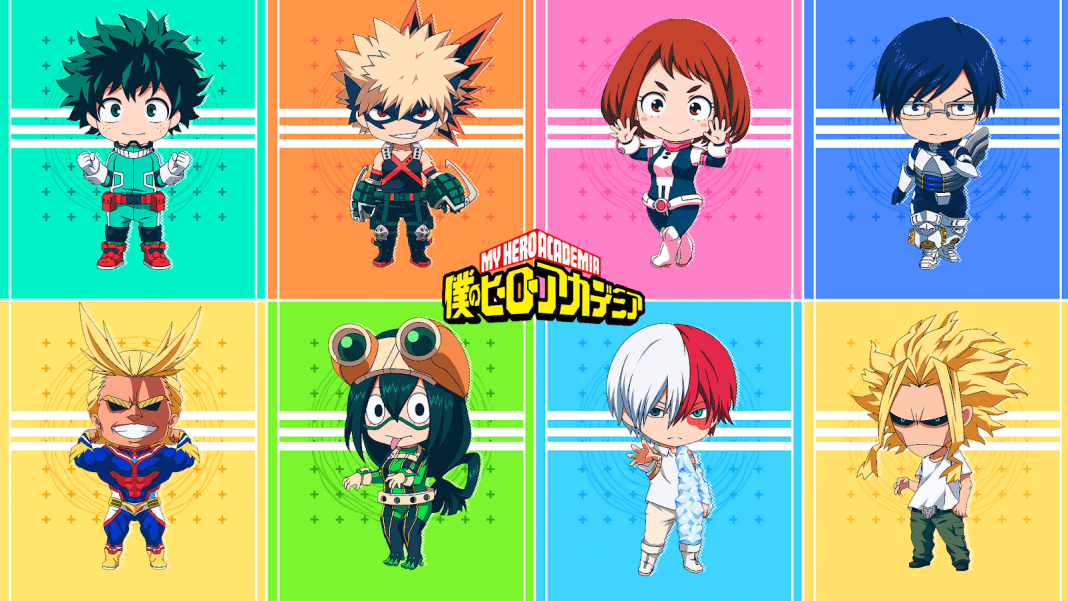 My Hero Academia is one of the most popular anime series of all time, and its characters have become iconic.

From the charismatic and formidable Deku to the hilarious Fumikage Tokoyami, there’s a character for everyone that makes you go “aww.”

Himiko Taga is one of the cutest yet weird characters of the MHA. She is a teenage girl and a member of the League of Villains who can change her appearance with her Quirk by taking some of the blood of a subject, including humans.

She has an unstable mind and weird psychology but still has amazing combat and athletic skills.

Yu Takeyama is the No 23 Pro Hero and known as “Mt Lady” in the MHA series. She has a quirk Gigantification that allows her to grow to a gigantic size of 67 ft.

Yu was never shown employing any strategy during battle, but she is a hero with quick thinking. She can keep an eye on the situation, figure out what her allies are up to, and lend a hand when it counts.

Itsuka Kendo is a supporting character in the My Hero Academia anime series and the representative for the 1-B class. She is well-known as the “Big Sister” and is admired as the best team leader.

For some reason, she’s the one that always appears to hit Monoma upside the head whenever he acts rudely.

Inasa Yoarashi is a Shiketsu High School student who has a very bold, proactive, and socialistic personality. He is also taller and better built than the other heroes of his same age.

His quirk Whirlwind allows him to create different types of powerful winds and control them to his will.

Mei Hatsume, an inventor with the Zoom Quirk, is a fantastic support character of MHA and a competent fighter.

She was also a resourceful student, coming up with numerous tools that the heroes could use; in fact, she handed Deku the Power Loader as a token of appreciation for her creativity.

Uwabami has an air of fame, but she’s still a level-headed hero. She values her modeling career more than her heroism.

However, she is often seen assisting other heroes and the police in the rescue of victims, fulfilling her duties as a Pro Hero.

Kirishima is one of the manly, boisterous, and brave students of class-A with a hero name, Sturdy Hero: Red Riot. With his quirk “Hardening,” he can harden his body and can fight recklessly without adapting any special fighting style.

Because of his positive demeanor and willingness to help others, he quickly bonds with those who share his enthusiasm and determination.

Fuyumi Todoroki is one of the most loving female side characters from My Hero Academia. She is the daughter of Endeavor, the second greatest Hero, and the older sister of Todoroki Shoto.

Fuyumi has a big heart and loves spending time with her family members. With their mother, Rei, away at the hospital, she became the de facto caretaker for her younger brother, Shoto.

Shinsou is a quiet, cunning, and manipulative MHA character. He transfers from the general course to the hero course and is now under training to become a pro hero by Eraserhead.

With his quirk Brainwashing, Shinsou can control any of his opponents if they exchange some words with him or answer his provoking questions.

Therefore, by the faculty of the school, he is considered a competent student who can become a useful hero someday.

Emi Fukukado, better known by her hero name, Ms. Joke, is a bubbly, friendly person who loves to make other people laugh with her zany and occasionally annoying sense of humor.

Emi’s quirk causes her opponents to explode in uncontrollable laughter and weakens their mental defenses, making it easier for Ms. Joke to defeat them.

Tamaki Amajiki is a member of The Big 3 and a student of class 3-A with a shy, introverted, and nervous personality. He is a person with little to no confidence but outperforms the pro heroes with his fighting skills and dauntless bravery.

Tamaki is also a childhood friend of Mirio and an idol to him. He is the sole motivation for Mirio and many students because of how he rose through the ranks and made his name in The Gig 3.

Mirio Togata is the most lively, cheerful, and cute MHA character who was famous as the leader of The Big-3 and the most powerful student of the academy.

With his quirk “Permeation,” Mirio can pass through any matter such as a wall or ground and can defeat his opponent with his formidable strength and combat skills.

He’s also one of the heroes who rescued Eri from the hands of Chisaki Kai (Overhaul) and lost his quirk during the mission.

Bakugou is short-tempered, aggressive, and rather unsocial. He resents Midoriya for being the heir of All Might’s quirk, One For All.

However, the way he uses his quirk Explosion and infuses it into his fighting style surpasses all the other students, including Midoriya and Todoroki.

Mina Ashido is a socialistic and confident female character in the My Hero Academia series. She has a great eye for style, enjoys wandering around stores, and has an excellent dancing talent.

However, she does not perform well in her classes, leading to some difficulties for her to clear her grades but still, she always enjoys her joyous life.

Kyoka Jiro, also known as Hero Jack, is another cute and savvy My Hero Academia character under training to become a Pro hero in Class-A.

Kyoka is a bit cold, unmotivated, and sarcastic with the Quirk to manipulate sound with her jack-like earlobes and bass on her feet.

Kai Chisaki is an anti-social and overly hygienic character with the villain name Overhaul, who wants to restore the world to its pre-quirk state.

She is open and honest, never sugarcoating her thoughts or feelings regarding people, and maintains her calm and composure under pressure.

Tsuyu’s Quirk grants her the physiology of a frog and enables her to perform any surface or underwater action a frog is capable of.

Monoma is a student of Class 1-B who always makes fun of the hero class 1-A and tries his best to mock them all whenever possible.

He is a taunting person with a complex personality, but his quirk “Copy” is remarkable, allowing him to mimic his opponents’ power and defeat them in their own game.

Ibara Shiozaki is a student of Class 1-B, the rival class of main characters with many talented and cute characters in the MHA series enrolled in the support course.

She has the quirk Vines, which causes her hair to sprout like vines. Her ability to extend and control the vines gives her an edge in combat.

Nejire Hado is not only one of the top three hero candidates for UA in Japan but also the most popular and powerful female student at MHA.

She is a naturally extroverted, cheerful, and playful young lady who can take control of her life force using her Quirk and unleash it in the form of devastating spiral shockwaves.

Momo Yaoyorozu is one of the most beloved and smart-ass characters in the MHA series.

Momo Yaoyorozu has great knowledge and intelligence, making her one of the series’s cutest, trendiest, and sharpest characters. With her quirk “Creation,” Momo can create any weapon within her body if she knows its characteristics.

Midoriya Izuku, also known as Deku, is a student of class-A and the main character of the MHA series. Although he is a diligent, persistent, and enthusiastic student with deep admiration for heroes, Midoriya was born with no quirk at all.

However, with his audacity and heroism, Midoriya stole the eyes of former no.1 hero “All Might” who then entrusted his limitless and unmatched powers to Midoriya and trained him for all his school life.

Eri is a short girl with wide innocent brilliant red eyes and beautiful grey-blue hair who charms her way into the hearts of her fans.

In the My Hero Academia Series/manga, she is a powerful, mysterious and cutest character with a dreadful past. Eri can put the world back in time by using her “Rewind” Quirk.

Todoroki Shoto is the son of No. 01 Hero, Endeavor, and is the most tranquil and gentle character of the MHA Series.

With his quirk, he can create fire with his left and ice with his right hand, but out of resentment for his father, Shoto always used ice for his major attacks and defense.

However, after fighting with Midoriya at the Sports Festival, he learns that his powers only belong to him, not to his father, with whom he wants to cut ties for his life.

Ochaco is one of the most adorable, friendly, and vibrant MHA characters who see the best in every situation, despite being realistic enough to recognize flaws and virtues.

She is a student at UA Academy and has the power to nullify gravity, allowing her to float around like a little cloud. It’s just too cute!

Extroverted, Intuitive, Thinking, and Prospecting. These are the traits of an ENTP person. We skimmed through the ENTP anime characters' personality database and ranked...
Previous article
High School DxD Season 5 Release Date, Trailer, Where to Watch
Next article
Persona 5 Royal: Shinya Confidant (Max Out The Tower Confidant)