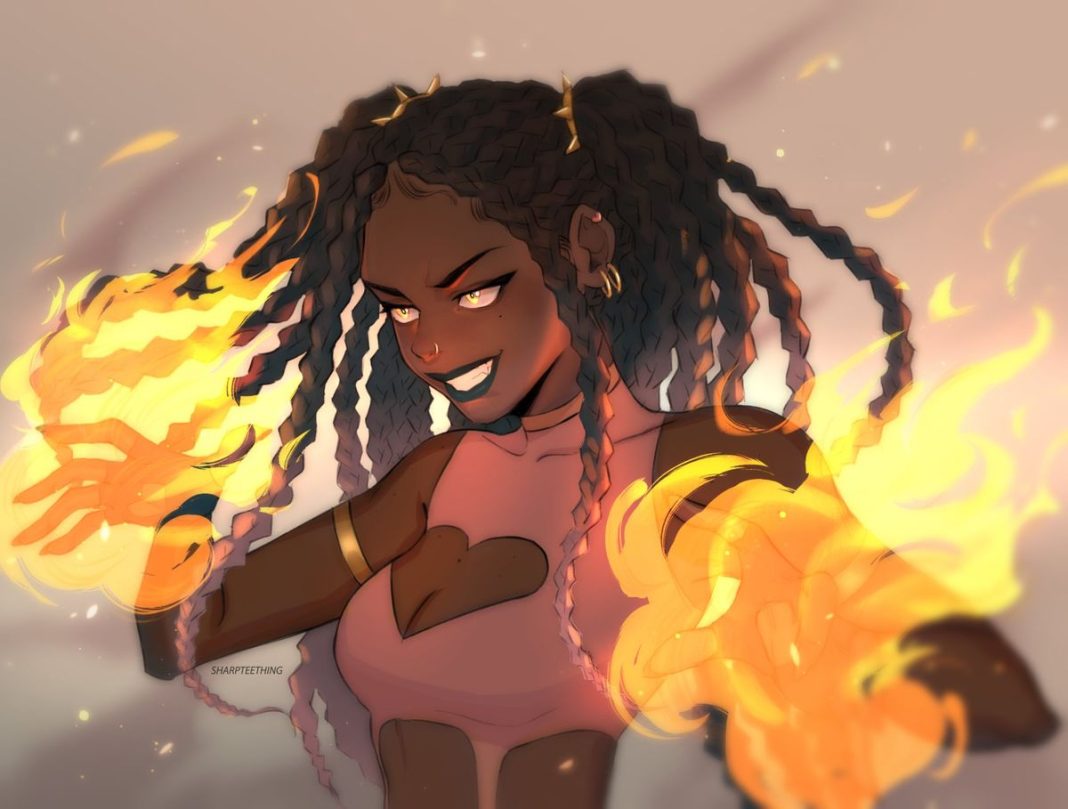 Growing up, Dragon Ball Z and Pokemon were my go-to anime. But in the late 1990s, there were very few animes of color, and finding black female anime characters was even rarer.

But with time more girls of color were introduced into the animeverse. Now we have black female characters of almost all anime personality types, from shy individuals like Canary to badass Ninjas like Karui.

Although her appearance is a shambles, Sister Korone did become a fan favorite due to her complex antagonist arc. Just don’t take offense to her stereotypical appearance and you’ll enjoy her more.

Meet the Shuri of Basquash! Miyuki is the brains behind almost all the upgrades and improvements to the mecha robots. And she’s got the artist hit every right note with the appearance. She is an inspiration for every tech girl.

S.A.M is the girl-next-door character of Canon Busters. This innocent-looking girl is in fact a robot named Special Associate Model. She can be as deadly in a fight as she is sweet when making friends.

Casca is one of the first black female anime characters, and she’s no damsel in distress. The leader of the Band of Falcom perhaps deserves a higher place on this list, but the newcomers have pushed her down.

If you’re ever feeling down, watch some Carole to rekindle your motivation and determination. As Carole tries to overcome several problems to realize her dreams, the struggle is real.

Iris is one of the strongest female Pokemon trainers, and we weren’t going to exclude her for the world. The champion of Unova is a great representation of strong black female characters in anime.

Hilda is an important member of Gekkostate. She pilots a robot, mentors Eureka, and looks after the facility in any capacity she can.

Not all black female characters are goody two shoes, some are dangerous assassins posing as cute dancers. Caldina is a complex character and mighty important to the Knights.

This Afro-Latino beauty is the co-protagonist of the anime. And let’s just say she is the complete package. She’s got the looks, the skills, and everything else a female anime protagonist should have.

Nessa is a water-type Pokemon gym trainer. Even though she is calm and soft-spoken, she is very competitive during battles. She uses 3 powerful water-type Pokemons (Goldeen, Arrokuda, Drednaw) and is pretty hard to defeat.

She is also a model and pursues her modeling career while training her Pokemons and battling opponents who are looking to earn a batch from her.

Atsuko is a Brazilian police officer who grew up in the same orphanage as Michiko. She was the one who caught Michiko 12 years ago. Atsuko has mixed feelings for Michiko and has a love-hate relationship.

As a police officer, Miss Johnson is strong-willed and can be quite cold. She has a good conscience and at times ignores logic and takes decisions from her heart.

Coffee is one of the most attractive black female anime characters ever. Despite her limited screen time, she is quite popular among fans, for obvious reasons. She is a bounty hunter who was looking for a bounty on IO.

This is when she crosses paths with Edward and Ein. She uses her charm to get information related to her bounty from the public and knows exactly how to latch on to their trails.

Mira is the commander of the DWMA Central Intelligence Agency. Sid Barrett is her partner. After Doctor Medusa came out as a witch and betrayed the academy, Mira started serving as the school nurse in the interim.

She is a loyal high-ranking member of the academy and is normally cold and cynical. She can also transform herself into a knife that can be used to slash through human skin or thrown at opponents. She is also an expert in hand-to-hand combat, can set elaborate traps, and also possesses bomb technician skills.

April is an accomplished MI-6 agent and works with July and November 11. Apart from being an impeccable agent, she can also manipulate atmospheric pressure.

She loves to drink especially strong liquor and can even outdrink a barman. Even though she is professional and dedicated to her craft she is emotional and protective of her team members.

Beneath those innocent eyes of a teenager lies a vicious fighter. Canary is a butler and works for the Zoldyck family. She watches over one of the gates and takes care of trespassers.

When she was only but 10, Canary single-handedly bested a trespasser and his 100 compatriots who wanted to eavesdrop on the Zoldycks. She is one of the black female anime characters fans would want more of once HxH resumes.

Mila is one of the Tres Bestias. She cares a lot about her Fracción and doesn’t take insults about them lightly. Even though she is quite rational, she tends to lose control and become a tad bit sadistic while fighting.

She has expert swordsman skills and possesses the Cero which she charges with her left and attacks using her right hand. She has high spiritual power and can also use the Quimera Parca with the help of Emilou Apacci and Cyan Sung-Sun.

Karui is a member of Team Samui. She is a kunoichi from Kumogakure and wields the Lightning Release technique. She is excellent at coordinating her attacks with Omoi and solely relies on Kenjutsu.

Her fighting technique was very helpful to ward off White Zetsu during the Ninja war.

Yoruichi is not a normal Shinigami. She can transform into a small black cat and retain her form for a long time. And in her feline form, she possesses golden eyes and takes on a male voice.

Not really a superpower but Yoruichi is witty, intelligent, and holds intricate knowledge of Soul Society. She is skilled in Shunpo and is also referred to as the Flash Goddess. She wields immense spiritual power, enhanced strength, and endurance.

Katara is a waterbender. As a child, she was raised by her grandmother. Probably the cutest of all black female anime characters. And the most powerful as well.

Katara was Aang’s water-bending instructor. Later on, her mastery over water proves to be a valuable asset to the group and helps them stop Fire Nation on their path to global domination.

Later on, she marries Aand and becomes the mother of 3 children. She deserves the first rank because of her unique abilities and the amount of impact she had on the main storyline.

Do you agree with our list of black female anime characters? Let us know if you feel any of your favorite characters deserve a mention here.

Although tomboys in anime have only recently developed a cult following, they have been ever-present. It’s hard to trace the first-ever anime tomboy, but...
Previous article
Edens Zero Season 2: Release Date, Official Teaser & more
Next article
10 Best ESTJ Anime Characters