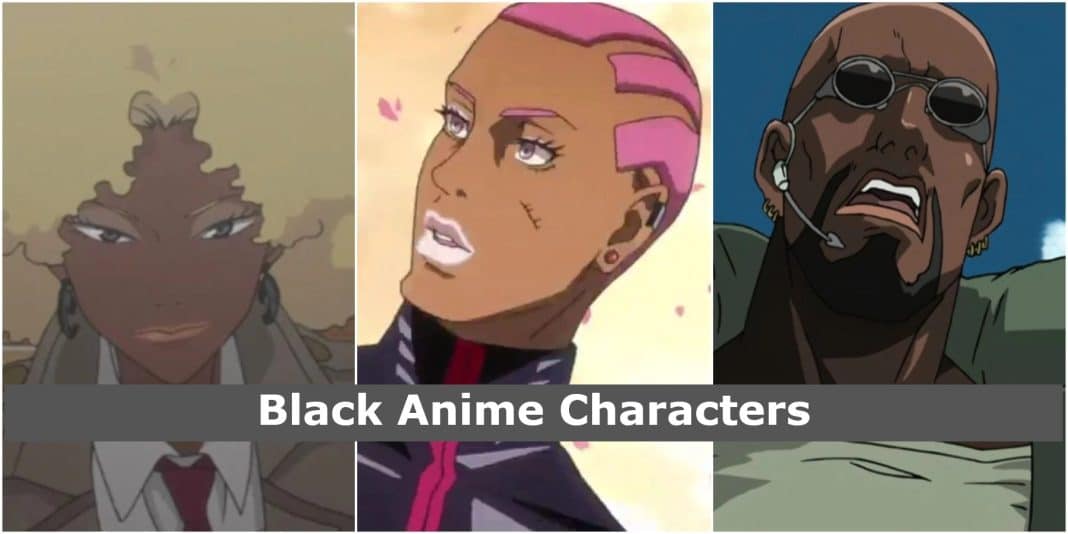 There have been anime from the 1980s (DBZ) that had black anime characters and with time as anime is becoming more mainstream, more and more characters of color are getting included.

In this post, we have listed down our pick of 30 memorable black anime characters. We have ranked them based on their caliber and popularity. And we’ve added watch links too!

Let’s get on with it then.

Mr. Popo is an amicable character. He is friendly and carries out tasks assigned to him.

He was charged with training Goku when there was an imminent threat from Piccolo, Nappa, and Vegeta. Later he retrieves the Earth Dragon Balls to resurrect Frieza’s victims.

Yoruichi is the first female black anime character on our list. She broke the stereotype by being the head of the Shihoin family. She’s also known as the Flash Goddess.

She surprised many anime fans when she transformed into a human for the first time.

Atsuko Jackson is yet another groovy black anime character. She hails from the same orphanage as Michiko and seeks revenge on her. Atsuko was in the police force and arrested Michiko twelve years ago.

Michiko tries to piss her off by calling her “Jumbo”. However, sometimes when Michiko is in a bad situation Atsuko does help her out.

Nathan Seymour aka Fire Emblem deserves a special mention. They are one of those rare non-binary characters in the anime world. Due to her interest in jewelry, makeup, and dresses, she was bullied by her classmates and disowned by her parents.

In the anime, Fire Emblem is confident about how they are and doesn’t shy away from their sexual preference.

Nils Yajima is a complete nerd. He only cared about science and never joined the Gunpla battle for fun. He only wanted to study Plavsky particles.

He also battled Sei and Reiji, after which he realized he actually loved Gunpla.

Nessa is the Gym Leader at Hulbury’s Gym. She is a water-type Pokemon specialist.

She is charming and very good-looking. Shee is a Pokemon trainer who also works as a professional model. She gives off Water badges to coaches who can beat her.

Marik Ishtar can create shadow play and control an individual’s mind. He owns the Millennium Rod. That’s how he created his secret villainous organization.

He seeks revenge on Pharaoh Atem and wants to replace him.

She is one of the protagonists of the series. Katara is a Waterbender of the South Pole Water Tribe. She is the brother of Sokka, the Last Airbender.

Katara joins Sokka and Aang to defeat the Fire Nation and bring peace between the four nations of the globe.

Kaz Kaan might come as a polite and decent man, but he also happens to be a demon slayer. However, if he doesn’t like a person he can be outspoken.

He is a magistocrat, a more than decent bachelor and a popular black male anime character among the ladies.

Kilik is one of the top students in Death Weapon Meister Academy. He is a hand-to-hand combat specialist feared by his opponents. He attacks with his twin gauntlets Fire and Thunder to pack some serious damage.

Impulsive, hot-headed yet loyal to his friends. That’s Kilik Rung for you.

Blind from birth Kaname hides his condition beneath his visor glasses. His blindness is compensated by his other senses being extremely heightened.

He is the captain of the ninth division and can go to extreme lengths to defend his ideas and philosophy of life.

Even though we don’t know much about April’s history, we just know that she was an MI-6 agent. She is a team player and bonds well with her team to complete their missions successfully.

She loves to drink and drinks beer whenever she can. So much so that she can even outdrink bar owners. She’s one thirsty gal!

Bob is a South African, also referred to as “the stranger.” Perhaps due to his long dreads and muscular build which isn’t native to Japan. He’s also the strongest character in the show.

He meets Souichiro Nagi in elementary school and calls himself the Knuckle Bombs.

Jet Black is a freelance bounty hunter from Ganymede. He is 36 years old, tall and muscular. He is brave and knowledgeable.

He has a cybernetic arm and works along with Spike to solve cases.

Dutch is an ex-Marine proficient in firearms and quite strong. He is a big intimidating character.

However, he tries to steer away from fights if possible and tries to negotiate as the leader of the Lagoon Company. He’s level-headed, pragmatic, and keeps his crew in check in case they step over the line.

Coffee is an attractive bounty hunter. He uses her charm to get to know the local area and gain information about his bounty.

She is a skilled assassin and knows how to defend herself. Indeed one of the sexiest black female anime characters ever!

Daz Bonez was a Baroque Works agent and the highest-ranking male agent. Earlier he was a bounty hunter.

He used to work with Crocodile and escaped prison to travel across the New World. He also has devil fruit power that lets him convert any part of his body into a blade.

Darui is a capable and highly skilled shinobi possessing the power of lightning. During the Fourth Shinobi World War, he was the right-hand man of the Fourth Raikage and also acted as his bodyguard.

During his training, he even managed to pick up Raikage’s unique black rai technique.

Darui still is a heartthrob and easily one of the best black male anime characters yet!

Urouge is a pirate from Sky Island. He is the captain of the Fallen Monk Pirates and is also known as the Mad Monk.

He has devil fruit power that converts damage to physical strength and has a bounty of over 100 million berries.

She belongs to Team Samui and is a kunoichi from  Kumogakure. Karui practices kenjutsu as well as mastered the long Katana.

In the Ninja war, she helped the fight by killing numerous White Zetsu. She is strong-willed and a very serious individual.

Canary serves Killua’s family. She safeguards their property and is charged with keeping people off their private premises.

And she does so well. Gon had to put up a serious fight just to get past her.

Mohammad Alai Jr. is the son of Mohammad Alai. He participated in the Chinese martial arts tournament as a part of the Japanese/ American team.

He practices a martial arts technique only involving punches, which is heavily influenced by boxing.

Nico Robin is one of the smartest female black anime characters. She is an archaeologist and wants to decipher the poneglyphs spread across the world.

She also possesses devil fruit power that lets her replicate any part of her body multiple times.

Avdol runs the fire-handling Stand, Magician’s Red, and is a Stand user. He is quite serious and a fair person.

He was a crucial character in Stardust Crusaders. Avdol was introduced as an Egyptian friend of Joseph Joestar who joins the group to defeat DIO.

Aokiji works for the World Government. He also possesses devil fruit power and can convert himself and anything he touches to ice.

In his first stand-off with the Strawhat pirates, he was able to beat them without breaking a sweat. He is one of the most formidable black anime characters.

Mohammad Alai is based on Mohammad Ali. He is also a boxer who visits Japan to check out its fighters and that’s how he met  Yuujirou Hanma.

He has dedicated his whole life to fighting for the weak and that’s how he came up with his own unique fighting style.

Marshall is the captain of the Blackbear pirates. He is the only person in the series so far to possess the power of two devil fruits.

Currently, he is one of the Four Emperors who rule over the New World. He also defeated the infamous Whitebeard pirates.

Killer B loves to rap and has a funky aura. He is fun to hang around and definitely one of the coolest black anime characters.

But did I mention he is a powerful Shinobi and possesses the chakra of an 8-tail Jinchuriki?

Biscuit Oliva is a man built out of pure muscle. He is so strong that even though he is incarcerated, he can move in and out of prison as he desires.

He is a friend of Yuujirou Hanma, the strongest man on earth. Oliva is definitely the most muscular black anime character I have ever come across.

Afro Samurai tops our list as the best black anime character. Not simply because he is the protagonist.

He can deflect bullets and crossbow bolts with his samurai sword. A formidable warrior, cold and aloof.

Just like Monkey D. Luffy is to be the King of the Pirates, Roronoa Zoro has been destined for greatness since One Piece started. The...
Previous article
One Piece Spoilers – All New Manga Chapter Leaks
Next article
Persona 5 Royal – Makoto Niijima Confidant Guide & Ranking