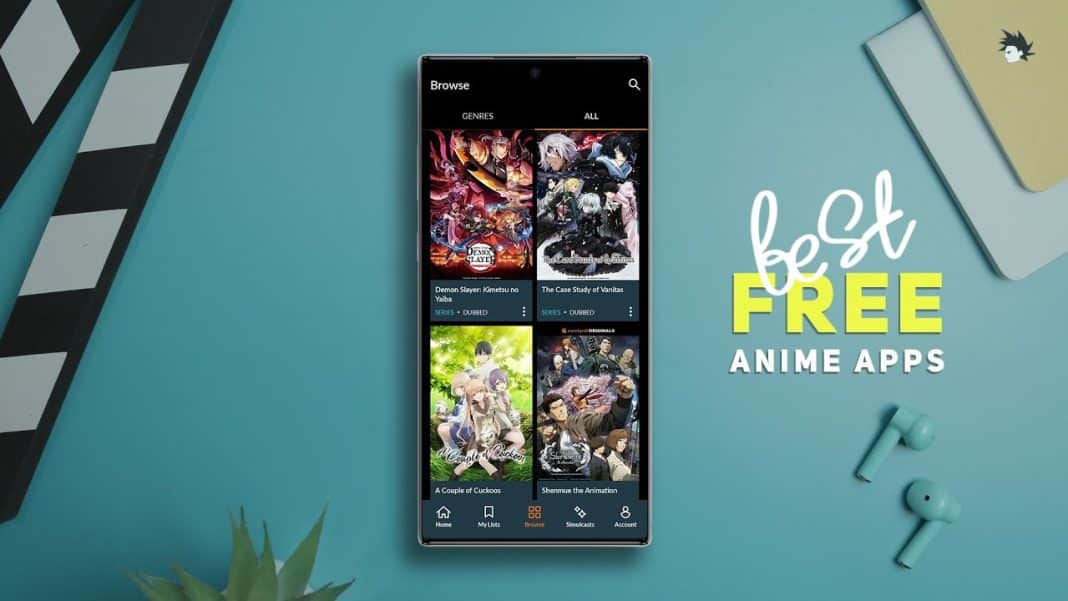 Anime is one of the most popular forms of entertainment, and thanks to the rise of streaming services, it’s easier than ever to watch anime on your phone or tablet.

While many streaming services require a subscription fee, there are still some great options for watching anime for free. In this article, we’ll take a look at the best free anime apps in 2023.

These apps offer a wide selection of anime shows and movies, including many fan-favorite series. They also offer convenient features, such as the ability to download episodes for offline viewing and keep track of your favorite shows.

Keep reading to find out which free anime app is the best for you.

Out of many free anime apps available, Crunchyroll has the largest of Anime collection. Popular shows like Naruto, Attack on Titan, Yuri on Ice, and My Hero Academia can be streamed for free.

Crunchyroll also has a paid premium subscription to watch premium shows without any ads. As it allows you to stream simulcast shows, you stream shows on the app as soon as they are broadcasted on cable. If you pay $7.99 a month, you go ad-free which you can try with a 14-day free trial offer.

However, if you are a fan of subbed shows, this website might not be the right choice for you. Crunchyroll has a few fan-subbed anime shows and series.

But a unique selling point that puts Crunchyroll on top of other free anime apps is its apparel and Manga shop where you can browse through your merchandise to complement your favorite series.

Anime Prime is one of the best anime apps for android which simplifies browsing for your favorite anime. Usually referred to as Netflix for anime, it boasts a similar user-friendly interface.

This app allows you to browse through its two broad categories of subbed and dubbed content, which is further categorized according to genres, trending, and new releases. Since the library is updated on a regular basis, you see a lot of new titles every time you open the app.

Anime Prime also happens to be the first app to stream real 1080p content. Apart from these wonderful features, the app also has added features like tracking your favorite anime, making a watchlist, checking the schedule for new releases, inbuilt anilist.co, and kitsu.io syncing, offline streaming, and dark mode for battery efficiency.

Although one might have to encounter some pop-up ads while streaming on Anime Prime, it can be overlooked.

Wakanim App is an underrated free anime app for FireStick. Even though unpopular, this app is legal and free from malware; it is also completely safe for children to watch due to the lack of adult ads.

The Wakanim App can be easily downloaded from Google play store and supports Chromecast. Although Wakanim’s library is not as expansive as its competitors, it has some of the rare classics that no other paid or free anime streaming site or app could offer.

The UI is rather straightforward and easy to navigate through all the new titles that are added from time to time.

Wakanim streams in HD, it provides the option of resuming from where left and sends notifications about new releases or new titles based on your previous preferences.

The app also has an offline streaming option for mobile (iOS and Android).

VRV advertises itself as “Netflix, but for the Geeks”. Fans of anime, video games, and cartoon genres like horror, sci-fi, and fantasy will find VRV targeted exclusively to their interests.

According to a statement by VRV’s content head Ace St. Germain, “If you can’t wear a reference to it on a T-shirt at Comic-Con, it doesn’t belong on VRV”. That pretty much describes VRV’s content collection strategy.

If you want to watch anime from across Boomerang, Cartoon Hangover, Crunchyroll, HIDIVE, Mondo, NickSplat, and Rooster Teeth, you can club their subscriptions with VRV.

Doing so leaves you with broader access to a multitude of anime titles. While the app is supported by ads, it provides content in 1080p to its basic users.

For the premium version, there are no ads but only seamless streaming. Needless to say, VRV premium allows you to get your hands over its own exclusive content as well.

The Kitsu App is a content discovery platform that helps anime and manga fans track, share, and discovers more of what they love. However, in the US, Kitsu provides in-app streaming services.

Therefore, from outside of the US, you need a VPN to avail of its service. Kitsu has a very simple ad-supported basic interface with a constantly updated list of new titles. From its genres tab, you can browse through the different categories.

The best part about Kitsu is that you will be getting genuine anime recommendations from the community and discover new series based on your preferences.

You will also be able to curate an anime library of your own and share it with the community and see their anime reactions. The Kitsu app provides similar features and novelties when it comes to Manga lovers as well.

Anime Glare is one such free anime app that acts as the one-stop destination for all your anime-watching needs. This app allows Real-Debrid Integration to choose from premium HQ links for smoother streaming.

Anime Glare has an intuitive UI that keeps a note of your preference history and syncs its suggestions from time to time. Its inbuilt video player syncs well with Simkl and MyAnime List. The anime content is dubbed in English and all of them have HD video playback quality.

However, if you are a fan of old, classic animes, this app would not be ideal for you because all its contents are new and fresh releases. Another aspect of this app that can put off some viewers is the fact that it has very limited app support.

Anime Glare only supports some versions of Android and iOS. However, if you have been only looking for a free anime no ads app, AnimeGlare will meet all your requirements.

FireAnime is a streaming app dedicated only to anime lovers, which brings together both new and old anime shows hosted across multiple servers. What separates FireAnime a popular choice among anime lovers is that it is completely free of ads.

The home page is regularly updated to accommodate fresh content, all of which can be played using an external media player of your choice.

Since the app draws its contents from multiple servers, it is possible that your device’s IP address may stand at risk. Therefore, turn on your VPN while using this app. The features include provisions for creating your own watchlist.

It also auto-creates an episode page on a dashboard that updates every time you finish watching an episode, just like Netflix. Of course, the fact that almost all devices support this app makes it highly sought-after.

AnYme is a native Android application that flaunts a huge catalog of anime. AnYme allows you to seek and see recommendations from other users. Interestingly, you can manually choose the quality of the streaming or leave it to auto mode.

With well synced to MyAnimeList, it keeps updating the list for better auto-suggestion. A gallery of anime wallpapers is available for fans to scroll through and download. As it comes with an in-built ad blocker, your stream goes ad-free.

AnYme is based on the latest SDK build tools to provide great compatibility with most devices. There is also a ‘Random Anime’ button to let AnYme suggest to you if you can’t decide what to watch.

Hit the button and it will take top-rated series at random. It makes alpha updates to the application multiple times a week to keep the user experience bug-free. AnYme also has a public Trello board to follow its development progress and know about upcoming new releases in advance.

Like our other picks, Funimation is streams anime online but with a sole focus on dubbed anime. Popular series and shows like Dragon Ball series, Attack on Titan, One Piece, and My Hero Academia are easily available on Funimation but all dubbed in English.

Funimation dubs new episodes within two weeks of their release in Japan. This app has proven to be one of the safe yet free anime apps for PlayStation 4.

The free version allows access to cartoons but with pop-up ads. However, if you upgrade your tier to the Premium one, you can bypass ads and access new releases the week before the free tier.

Funimation app has a merchandise store with collectibles and other things along with a huge DVD and Blu-ray collection. The only shortcoming of this app is that it serves a limited region like the United States, Canada, United Kingdom, Ireland, Australia, and New Zealand.

You will probably have to use a secured VPN to access from any part of the world.

Known as Showbox Counterpart for anime and manga shows, HitAnime APK allows you to watch and download the latest shows for free. It has a pretty simple user-friendly interface, but if you are bored of its monotony, it allows customizable layout options as per your tastes. You can add other users to your friend list, chat with them, and share files with ease.

Even with such an expansive library, the database is updated on a daily basis and you see new suggestions on the dashboard from time to time. Because HitAnime provides a simulcast, you never miss any new episodes of your favorite show.

Surprisingly, you don’t need to open an account or buy a subscription, access it directly for free.

Luckily we have enough options to watch anime for free. These platforms are known to offer reliable safe links over a period of time. So choose between a myriad of different apps suggested above and start watching your favorite anime shows for free. Also, let’s know if you have something better to suggest for our reader’s community.

Anime is filled with a wide range of strong...
Read more

While you and I have grown up seeing the...
Read more

Anime is filled with a wide range of strong and complex female characters, but none quite capture the hearts of viewers like the anime...

While you and I have grown up seeing the Japanese’s own medieval warriors like ninjas and samurai, we cannot deny the fact that the...

Gambling anime characters are universally admired for their ability to bluff and make their way to win, often by taking risks that others would...

After watching Made In Abyss for the first time, fans only had one question- when is Made In Abyss Season 2 coming out? Well, it...
Previous article
10 Best Free Anime Streaming Sites In 2023
Next article
15 Most Popular Manga Of All Time (Best selling)