By Shahzaib Manzoor
Updated On: September 20, 2022 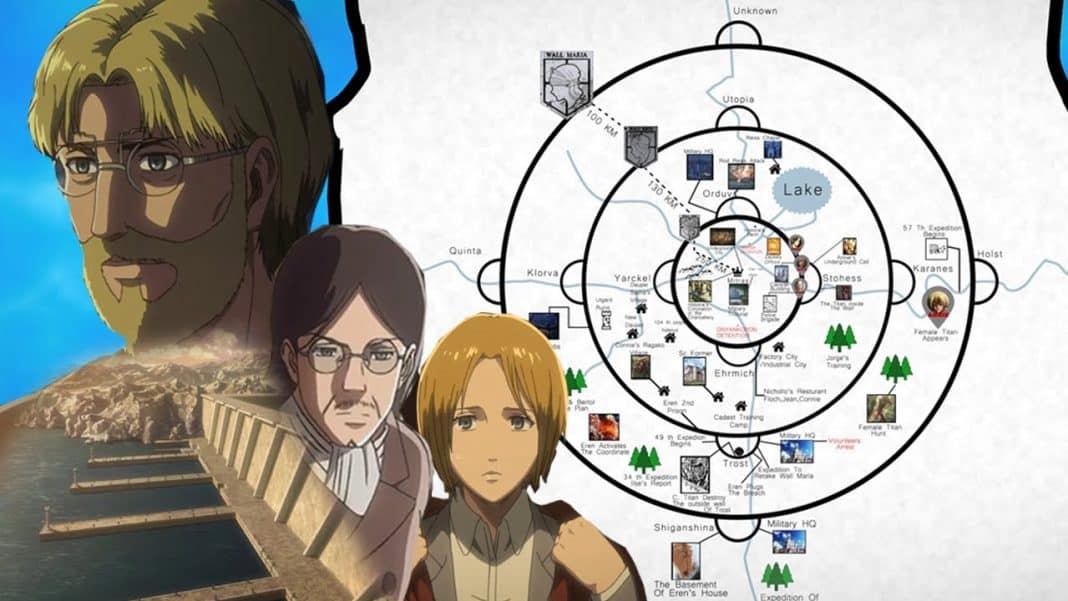 As far as anime goes, Attack on Titan has to be near the top!

Like any other top-ranking anime, AOT’s success can be attributed to many factors, including the show’s huge fan base, emotionally engaging plot, and hundreds of episodes.

However, despite its huge success, Attack on Titan provides relatively little information on its fictional setting and doesn’t care to launch an episode on the AOT world map.

Because of this information gap, AOT fans are left wondering about the size of this fantasy world and are curious to know more about it.

Therefore, in this blog, we will talk about the real map of Attack on Titan that has been shown in the series in different episodes.

In Attack on Titan, the scale of the world is much larger than in other anime, with humongous individual nations. Therefore, it was hard to identify countries on the previous maps.

However, the AOT world was shown in a new light with clear and more distinct details on the map that was unveiled in Episode 86. With this updated map, we can give you a better idea of just how huge the AOT world is along with some vital details.

The updated version of the map not only uncovered Paradis but also reveals some previously uncharted areas, such as the Marley nation.

For example, if you look at this image of the map, you can find some places with markers placed on them. It means that the person who designed this map entirely focused on it instead of saving himself from titans. Admirable to say the least!

And from what we’ve seen, the show makes no effort to hide the fact that a large portion of the world is covered with broad mountain ranges which are great to hide or build secret communities.

The only drawback is that if the area were ever attacked, it would be difficult to make a hasty retreat down the mountains.

As you can see, Paradis Island is situated in the Eldia nation that used titans to build their huge empire by eradicating any potential threats to their territory.

However, Eldia was weakened by civil war and ultimately fell during the Great Titan War. After losing so much territory in the conflict, the people of Eldia got weary and withdrew from what was left of their homeland.

They also lost 7 out of 9 titans at Marley’s hands. And at the end, Paradis Island was the only remaining territory.

The territory ruled by the vast Marley Empire includes one big continent west of Paradis, a smaller one south, and a peninsula to the southeast. The territory also includes a western continent and a number of smaller islands.

Using the Titans’ strength, the Warrior Unit kept Marley on top of the world, but the country’s decline in technical advancement eventually doomed it.

In the Walls, Marley is the primary adversary because it populated Paradis Island with Titans to trap the Eldians inside. As of the year 854 AD, Marley launched a war on the island of Paradis.

Trivia: Marley’s territory is a vertical reflection of the continents of Africa, the Middle East, Europe, and Brazil.

As the only country in the world that doesn’t discriminate against Eldians, the Orient-based republic of Hizuru is a rarity indeed.

The country has been in decline since the Great Titan War, joins forces with Paradis Island after learning of a long-lost Shogun clan descendant.

They also learned that the island’s iceburst stone is reserved in the Paradis which could help them revive their country.

There is not much information available about Hizuru and therefore, we are unable to sketch its geography in any detail.

A coalition of nations known as the Mid-East Allied Forces has formed to take on the Marley region. However, even after 4 years of bloody competition, the Mid-East Alliance was unable to seize the Founding Titan.

Although the precise location of the Allied Forces in the Middle East is unknown, it is believed to be on the Peninsula.

A Reddit user attempted to draw its map but was widely mocked for being wrong.

Forests and Greenland In Attack On Titan

On several occasions, you can see a vast green land full of towering trees. For these Forests of the Giant Trees, it is said that there are some trees above 300 feet in height.

And that these trees can reach heights greater than those of most Titans. For this reason, Titans usually use them to conceal their presence!

So far, this is all the information we have available on the AOT world map. If a new Attack on Titan map is revealed in a future episode, we will undoubtedly analyze it and feed your curiosity about the AOT world.