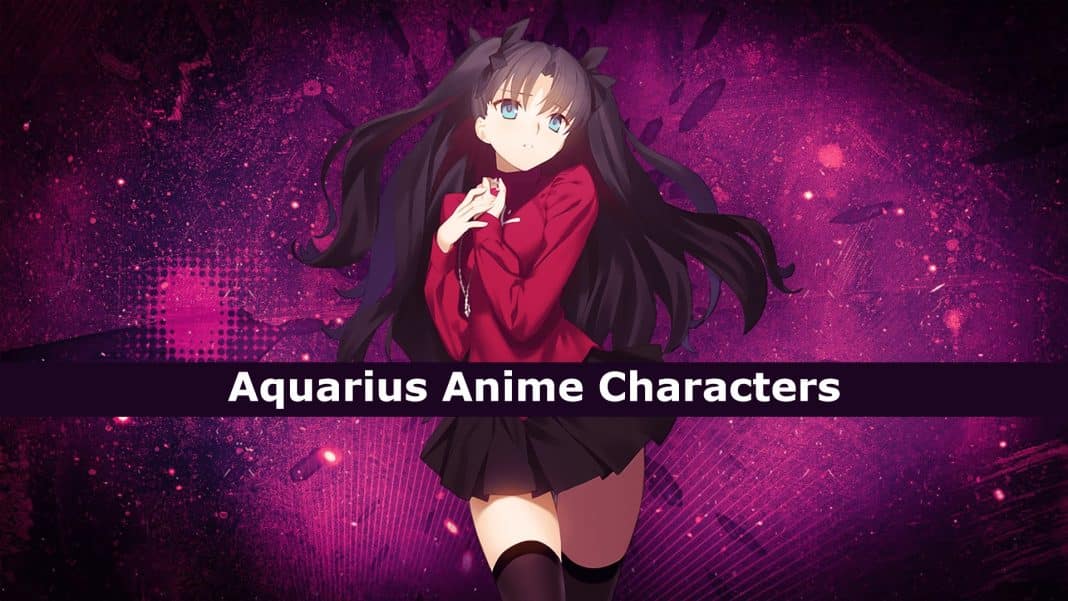 Aquarius anime characters are a blend of introvert and extrovert. They like to interact with others but rarely venture beyond their comfort zone.

Anime characters that fall in the Aquarius period are independent creatures and don’t rely on anyone, which is one of their greatest strengths. They are exceptionally intellectual beings and have excellent problem-solving skills.

Here are the best Aquarius anime characters you want to know about.

When are Aquarius born?

Aquarius is the 11th zodiac sign, which starts on January 21 and ends on February 20. People born under Aquarius have charismatic personalities, naturally attracting them to others.

Aquarius are generally rebellious, independent, and envy others. Most Aquarius anime characters have hidden personality traits that only show up over time.

Rin has an extroverted personality but she keeps her distance from others, avoiding confrontation.

She also loves to practice magic. Interestingly, Rin is not the only magician in her family and inherited this ability from her ancestors. Having a family of wizards, Rin always has pressure on her shoulder to carry on the dark legacy of her family.

Naomi plays a relatively short role in Death Note. But she’s a fan favorite and shows many extraordinary abilities, from marksmanship to karate.

She is brilliant and sharp. Naomi is skilled at reading other people’s expressions and thoughts. She is conscious of what she speaks and thinks twice before speaking.

Kou Mukami is a graceful and handsome man with a history. His biological parents left him. Because of this, he ended up living on the street.

Long story short, he met with bad company and got involved in the world of crime. Despite having a handsome and charismatic personality, he isn’t much liked by people.

Maki Zenin exemplifies the qualities of an Aquarius. Since most Aquarius characters are strong-willed and highly determined, Maki is the epitome of perfection in both traits.

Maki is independent and was born with dark magic powers, making her a powerful sorcerer. And she’s sassy too!

Beastars does have several complex characters, like Juno. She is an animal-lover and kind towards other animals. She eventually becomes a leader of her people.

Because of her careless personality, Juno ignores what others say about her. However, she loves serving people and doing things that make them happy.

Haruka Tenou is a reserved and introverted person who doesn’t enjoy much company. However, she does keep her friend Michiru Kaiou close. And she is ranked as one of the top racers in the country.

That is why Haruka spends her time racing down the street when she is not attending classes. Haruka is immensely independent, which is why she hates when someone tries to dictate to her.

Although Nico Robin is a shy person, she doesn’t hesitate to get things done when needed.

Nico has a great interest in archaeology and wants to excel in academics. Moreover, she has excellent problem-solving skills and is well adapted to solve conflicts with her intellectual abilities.

Ren Tsuruga is polite, mature, and level-headed. A famous star in Japan, he’s known for his acting skills. But, Ren’s professional image is quite different from his private life.

He is rude and arrogant behind the scenes but keeps these hidden with a charismatic professional attitude. He has developed an impressive reputation and mastered the art of manipulating people.

Haruhi is unique. She doesn’t take an interest in fashion trends, boys, her studies, or how she looks.

Yet, she stands out from others by teaching how to start the next best startup. Haruhi isn’t ambitious towards her goals but likes to educate others to become successful and surpass her.

Shizuku is a water goddess with a hard past. Her family was murdered by demon hunters, which fueled her hatred toward them.

Shizuku is a highly emotional and passionate person. She gets overwhelmed and distracted from her goals. However, Shizuku has come a long way and even tries to forgive the demon hunter in later parts of the anime.

Just like Monkey D. Luffy is to be the King of the Pirates, Roronoa Zoro has been destined for greatness since One Piece started. The...
Previous article
Izana Tokyo Revengers: Everything About Hateful Half-Sibling
Next article
Persona 5 Royal: Tae Takemi Confidant Guide