AnimeAokiji One Piece: From Marine Admiral To Blackbeard’s Pirate

Aokiji One Piece: From Marine Admiral To Blackbeard’s Pirate 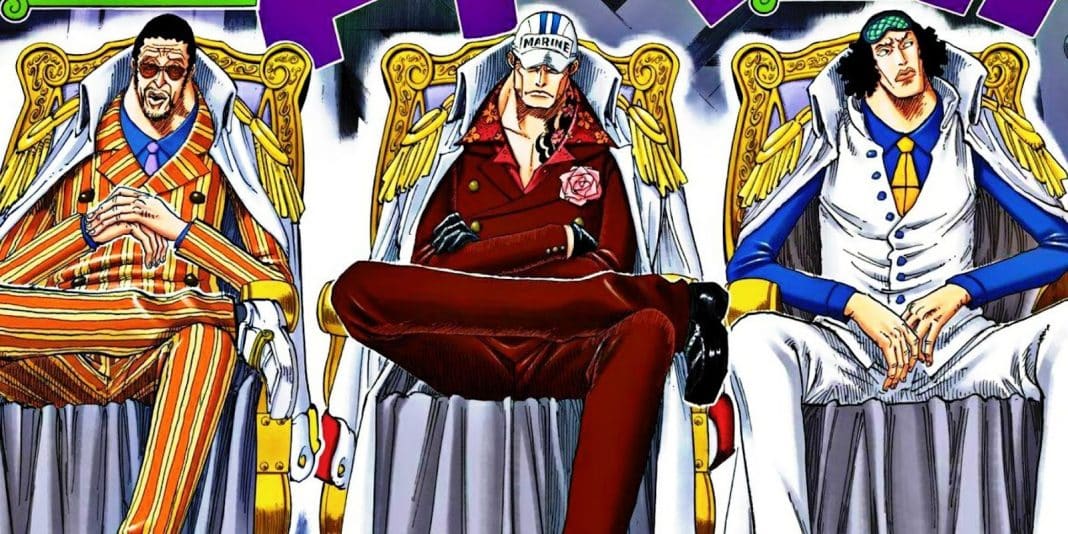 Today, we will consider the Aokiji One Piece marine admiral who switched sides and became a pirate.

The Marines are one of the most significant military forces on the seas, and their only objective is to wipe out the Pirates.

But that’s not going to work if the higher-ranking Marines end up joining their direct enemies.

Yes, we are talking about Aokiji.

It is common for Marines and Pirates to sometimes team up for the greater good. But, it’s rare to see a Marine Admiral resign his title and join one of the Yonko. But that’s what Aokiji One Piece Marine Admiral did.

Who is Aokiji in One Piece?

Aokiji, also known as Kuzan, is a former Marine Admiral and a current member of the Blackbeard Pirates.

At that time, Aokiji was one of the World Government’s greatest weapons, alongside Akainu and Kizaru.

With the Ice-Ice Devil Fruit, Akoiji could freeze his enemies to death, build bridges of ice, and construct anything and everything he needed out of ice.

His is a Logia-type Devil Fruit, which means he can also transform his entire body into ice.

In short, Aokiji in One Piece is one of the strongest characters, but he’s super chill. Aokiji’s motto is “Lazy Justice,” which means he wouldn’t take action unless he absolutely has to.

But that doesn’t mean he’s any lenient to the Pirates. He repeatedly attacked Whitebeard during the Marineford War and injured Jozu as well.

Saving Nico Robin as a child and not killing or even arresting Luffy are just a few examples of his compassion.

Aokiji was also a ruthless Marine at the beginning. As the World Government sank to new lows to try and accomplish its primary goal, Aokiji switched from Burning Justice to Lazy Justice.

But, he always stands for what’s right- which is why he opposed Akainu’s appointment as Fleet Admiral. Aokiji knew the cold-heartedness of his fellow Admiral and didn’t want him to turn the whole Marine force into merciless murderers.

So, Aokiji fought Akainu for the Fleet Admiral position but lost. After losing, he left the Marines.

Why did Aokiji join the Blackbeard Pirates?

No one knows for sure because Aokiji has been away from the limelight for quite some time now.

After he left the Marines and joined forces with Blackbeard, the last we saw of him was in the Punk Hazard Arc. Aokiji steps in and stops Dofalmingo from killing Vice-Admiral Smoker- a long-time friend of Aokiji. That’s also when he discloses that he’s connected to the underworld now.

All we know is why he left the Marines.

As mentioned above, Aokiji is a compassionate man who stands for what’s right. He was never on board with the World Government’s way of doing things. The corruption, fascism, and cruelty employed by the World Government and Marines countered Aokiji’s morals.

And the final nail in the coffin was Akainu becoming the Fleet Admiral.

But he still tried.

After the higher-ups nominated Akainu and Sengoku nominated Aokiji to be his successor, the two decided to fight for the Fleet Admiral title. In the end, Akainu won and became the new Fleet Admiral of the Marines.

Their fight lasted for 10 days with both getting severely injured. Aokiji even lost a leg. Akainu spared Aokiji’s life, and Aokiji resigned from the Marines as he didn’t want to work under Akainu.

Later on, the Five Elders confirm that Aokiji is now a part of the Blackbeard Pirates.

So, we’ll see a lot more of the Ice King in the final chapters of One Piece.

But who will he fight for?

Is he actually a pirate now? Or is it all just a ploy by the World Government? Could he join the Revolutionary Army? Read on!

Is Aokiji in One Piece a Villain?

Aokiji is a morally complex character, and it’s hard to classify him as either good or bad.

It would be easier to call him a villain because he was a part of the Marines and an antagonist in the Water 7 Saga, Marineford Arc, and the Long Ring Long Island Arc.

But, now that he’s a Blackbeard pirate, it’s complicated.

Many people believe that if he really wanted to bring about change, Aokiji should have joined forces with Shanks or Luffy.

Pirates aside, the Revolutionary Army would have been the perfect fit if he is self-righteous. But he decided to join Edward Teach, the man who’s just as immoral and ruthless as Akainu.

This has left room for the covert-op theories. Many believe Aokiji is a World Government mole on an intel-gathering mission before the big showdown on the Grand Line.

If these theories turn out to be true and he succeeds in his mission, Aokiji will be immortalized as the best villain of One Piece.

We really hope to see more of Aokiji in One Piece, only to find out where his loyalty lies. And if he has left the Marines for good, fans deserve to see an Aokiji Vs. Akainu showdown.

Extroverted, Intuitive, Thinking, and Prospecting. These are the traits of an ENTP person. We skimmed through the ENTP anime characters' personality database and ranked...
Previous article
40 Best Anime on Hulu To Wrap Up 2022
Next article
Naruto and Hinata Kids: Closer Look At NaruHina & Their Kids