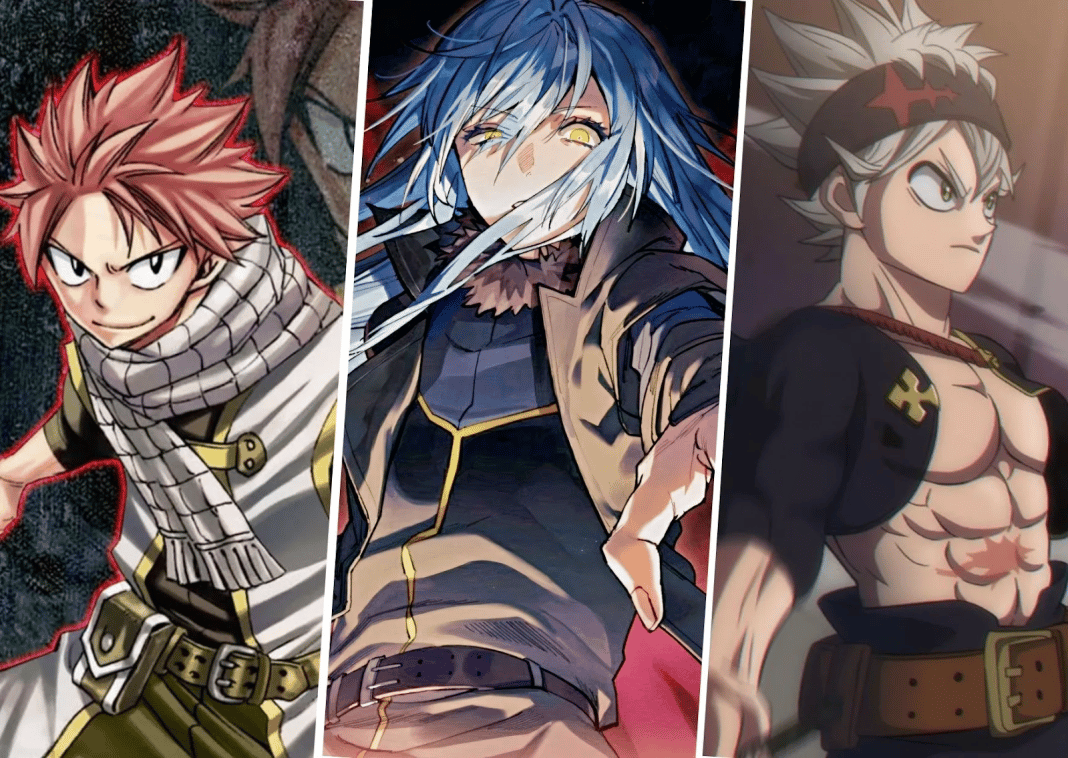 Anime with magic is an excellent source of entertainment that features hundreds of mystical characters such as dragons, fairies, and monsters and provides an enticing experience to the viewers.

Not only the characters, but magical anime series are sure to have great storylines. The main character starts weak and becomes a badass through rigorous training or heading on challenging adventures.

Therefore, In this blog, we’ve put together a list of the 20 best anime with magic filled with sorcery and exciting adventures. The list is long enough to keep you entertained for months. Let’s get started!

Log Horizon is where 23-year-old graduate student and pro Elder Tale gamer, Shiroe, gets into the game, for real. Rest is in-game with Shiroe and his friends who virtually battle for peace in the virtual city.

The Blast of Tempest is about Yoshino Takigawa, a college student who was living a normal life until the day of the murder his fiancée Aika Fuwa, the adopted sister of Mahiro Fuwa.

Years later, Mahiro meets with a lone wizard who says he can help him track down the person responsible for his sister’s death.

From this point, the three of them start their journey to solve the murder mystery of Fuwa and save the world as well.

In Demon King Daimao, Akuto Sai enrolls in a magic academy to make the world a better place through his studies.

As he joins the Constant Magik Academy, a prophecy declares him to be the future Demon King, putting a target on his back.

While some grow close to him, other students start to despise him. And all that makes his school life complicated.

Raizel, the Noblesse, has been dead-asleep for 820 years. Now that he wants to live a simpler life and learn of the human race’s advancement, his loyal servant is back as well. But so is the dangerous organization, Union.

As Rai joins a high school to pick up on everything he missed during his slumber, he’d have to use his powers to protect his new friends during their misadventures against the Union.

16. The Legend of the Legendary Heroes

In this anime series, the protagonists, Ryner and Ferris, are two fighters with unexplained skills who go out on a quest to find the Hero Relics, which grant their possessors superhuman abilities.

Cerberus is an adventure and fantasy anime where a malicious dragon named Dagonzord existed on the continent of Kuna’anh and destroys anything and everything in its path.

14. Cautious Hero: The Hero Is Overpowered But Overly Cautious

In this anime, the goddess Ristarte saw the unique abilities of Seiya Ryuuguuin and summoned him to her world, Gaeabrande.

However, the new hero Ristarte is exceedingly cautious and refuses to engage in battle until he is perfectly prepared.

In Magical Warfare, humans and wizards live side by side in harmony. Meanwhile, a group of magicians known as the Ghost Trailers has begun targeting humans in an effort to establish their superiority.

Wise Man’s Grandchild is a novel adaptation anime series written by Tsuyoshi Yoshioka. The plot of the anime centers around a young boy who died in a car accident and is reborn into a fantasy world.

He is raised by a guardian (formal nation hero) who provides him with the training he needs to become a great magician and a strong warrior.

11. Re: Zero – Starting Life in Another World

Re: Zero is the magic anime where Subaru Natsuki, our hero, is unexpectedly carried off to a fantastical world of beasts and magic.

As a fantasy lover, he finds it delightful to be entering this new world. However, he soon discovers that he possesses no super or magical powers and dies unexpectedly.

In Little Witch Academia, Atsuko Kagari, the main character, and her classmates learn what it means to be witches during a period when sorcery is on its end.

Atsuko’s role model, the famous Witch Shiny Chariot, had always emphasized the importance of having faith in one’s abilities. She inspired Atsuko to realize her potential as a witch and motivated her to follow her dreams.

Flying Witch is an animated series focusing more on its magical elements than action scenes. Makoto Kowata, a young witch in training, travels away from her home in search of education and experience in various magical disciplines.

The main character, Makoto, may look like any other high school student, but she stands out from the crowd due to her bizarre and out-of-the-ordinary interest in magic.

The dark fantasy anime Overlord is based on the Japanese novel of the same name by Kugane Maruyama. The protagonist of the Overlord anime is Ainz Ooal Gown, formerly known as Momonga.

He is the leader of the powerful guild of Yggdrasil and is the most powerful of the Forty-One Supreme Beings.

06. Magi: The Labyrinth of Magic

The popular swords-and-sorcery anime Magi strongly focuses on the Middle East throughout the series and is filled with long, action-packed adventures.

As the name suggests, it delivers a magic-filled story, reflecting the famous novel “1,001 Arabian Nights” and the legendary middle-east character, Aladdin.

The Seven Deadly Sins is an adventure and action-packed series about demons, goddesses, and several clans at battle with one another.

The anime follows the adventures of seven lead characters, all of whom are powerful members of their respective clans, possess tremendous magical powers, and are known for their sins.

04. Suppose a Kid from the Last Dungeon Boonies moved to a starter town?

The anime is a magical academy and military-themed anime that follows Lloyd Belladonna, the village’s weakest youngster who dreams of joining the military.

Therefore, he leaves his small village to attend a military academy in the large city, blissfully unaware that his fellow villagers are far more powerful than the average person.

Mushoku Tensei is an ecchi-inspired magic anime with high-end graphics and a lore-filled fantasy world. Rudeus Greyrat, a middle-aged hermit dies and is reborn in a fantastical realm as a kid with great magical abilities.

With a strong affinity for magic and the resolve to take life seriously for once, he sets out on an adventure packed with action, magic, and ecchi moments.

02. That Time I Got Reincarnated as a Slime

The anime is one of the action-filled magic anime where a young boy, Satoru Mikami, got killed in an accident and reincarnated as a slime in another world.

After becoming a slime, he discovers that his body has mystical powers that allow him to use the magical abilities of the animals and monsters he eats as food.

After a while, he establishes his village, army, and country with other powerful characters like demons, Orges, and dragons as a demon ruler himself.

Black Clover is the most prominent, adventurous, and training-filled magic knights anime where the main heroes, Asta and Yuno, aspire to become the strongest magical being, the Wizard King.

At 15, these two young individuals receive their magical books known as grimoires. Every grimoire has a different number of cloves on its cover to signify love, hope, integrity, luck, and the devil.

And that brings us to the end.

Now you have, at the very least, a couple of months worth of anime to watch. Each one is more magical, more adventurous, and more entertaining than the last.

We’d also love to hear about your favorite anime with magic, so hit the comments.

Just like Monkey D. Luffy is to be the King of the Pirates, Roronoa Zoro has been destined for greatness since One Piece started. The...
Previous article
All One Piece Filler Episodes Explained!
Next article
10 Irresistible Libra Anime Characters, Ranked