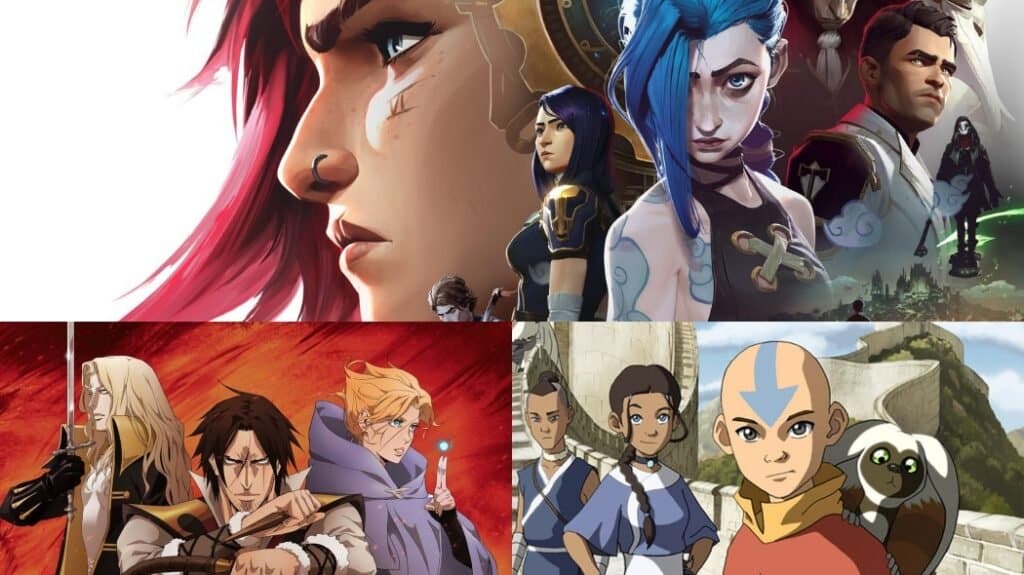 When it comes to anime, the whole world has it associated with Japan. The word anime has derived from the word animation. But, over the years, the creators in Japan have given it a unique meaning.

Anime is not just about animation. Instead, it represents a unique style of character design and storytelling.

On the other hand, anything animated is called anime in the western world. To some, Power Puff Girls is an American anime show.

But, the good thing is that Japanese anime has educated Western audiences. They’ve pushed the creators to try and make authentic American anime series instead of pushing kids’ cartoons as anime.

What Is American Anime Called?

American anime will always be cartoons, no matter how good they get.

The word anime means “a style of Japanese film or television animation.” So, there’s no way an animation from America will ever be called anime, officially.

But, American animations are making a case for themselves with some great animated series. While some are heavily influenced by the illustration style of Japanese anime, a majority are striving for originality.

While creating this list, we focused on bringing you original American anime.

There are a couple of DC animated shows and some video-game-inspired shows as well. But don’t worry, they start from ground zero, so no one misses out on anything. These are the best American anime of the lot.

Based on the Halo franchise, Red Vs. Blue shows the aftermath of the 2552 Halo Event. A civil war breaks out among the humans, and two armies are born-  Red and Blue. The two armies fight over a worthless piece of land in the middle of nowhere.

And although half of them don’t know the what and why of this war, they fight! Give it a watch for a dose of action, comedy, and Halo. And with the series still going strong after 19 seasons, you have plenty of content to binge-watch.

Inspired by Dota 2, Dota: Dragon’s Blood is the story of Davion, a Knight who slays Dragons. But, the premise flips when Slyrak, a Dragon, merges with Davion. The once Dragon Slayer will end up joining forces with his prey to stop the biggest evil, Terrorblade.

This series of Demons Vs. Dragons is a visual treat with some of the best fantasy writing. If you don’t mind the gore, you don’t want to miss out on this battle between Humans and Dragons.

A reboot of the 1980 series of the same name; Thundercats is in here for the nostalgia factor more than anything else.

The Lizard Army lays waste to the Thundera and enslaves all the cats living on planet Third Earth. A small faction of cats, led by Lion-O, successfully escapes the Lizards and starts plotting to save Third Earth.

A thrilling adventure begins as they collect everything needed to defeat Mumm-Ra. It’s a good watch if you don’t compare it to the original.

Before you start judging, Steven Universe creator Rebecca Sugar admitted the influence of anime on her creation. So, we’re not just labeling it as a Cartoon Network series.

A young boy named Steven teams up with alien Crystal Gems named Pearl, Garnet, and Amethyst to fight an intergalactic war. It’s a coming-of-age story with crazy adventure and action for the MC.

The story and character development is the highlight, though.

The Owl House is getting increasingly popular among American anime viewers because of its isekai-anime-like plot.

Luz Noceda, a teenage girl at a summer camp, ends up in the Demon Realm. There she befriends a witch, Eda Cawthorne, and her housemate King, a demon.

As the series progresses, the three grow closer. But Luz needs to get back to the human realm.

The Legend Of Korra is a sequel to one of the best American animes ever, Avatar: The Last Airbender.

Set 70 years after Avatar: The Last Airbender, The Legend of Korra focuses on Korra, a 17-year-old girl who is the reincarnation of Aang.

As she learns element bending during her various journeys, Korra must settle the civil unrest in a modern world that’s drifting away from the social values set by Aang.

Another American anime that’s so good it’s hard to believe that it’s a Cartoon Network production.

Sym-Bionic Titan follows the story of three aliens- a princess, a soldier, and a robot. As the three escape their war-stricken planet, they disguise themselves as high school students.

Soon, the enemies start attacking Earth to kill the princess, the sole heir of the kingdom.

The three combine their powers to control a giant robot, fight off all the attacks on planet Earth and protect the princess.

Even if you don’t like superhero animations, this one is just unmissable.

The series follows a group of DC sidekicks who want a seat at the Justice League table. These young guns get a chance to prove themselves to the big boys after getting a mission of investigating Cadmus.

As they work together, recruit new members, and take down bad guys, the Young Justice League is formed.

DC, as usual, has knocked the animation and writing out of the park.

We just wish the series was more easily accessible.

Dragons, Elves, and Humans lived together in harmony, but it all came crashing down when humans turned to Dark Magic. After 1000 years human King Harrow killed the Dragon King Avizandum and took away his heir’s egg, sparking a war of Dragon and Elves Vs. Humans.

As the elves assassinate King Harrow, his two sons will try and bring peace to the world.

Another Cartoon Network original series that got popular because of the storytelling.

A Japanese Prince fights a dark wizard named Aku to protect his country and the whole world. But just as he is about to land the final blow, Aku sends him a thousand years into the future.

Now, with nothing but his sword, Samurai Jack will train to get back to his time and defeat Aku, who has already taken over the whole world.

Another superhero animated series, based on DC Comics’ Vixen.

Vixen is about an African-American girl with the superpower of mimicking any animal on Earth, alive or extinct. As she looks to avenge her parents using her newly found powers, Mari McCabe finds herself in the Arrowverse.

But don’t worry, there’s no need to catch up with other DC TV shows like Flash, Arrow, etc. to enjoy this American anime.

Castlevania is one of the best American anime and the closest to the Japanese style of anime production.

The story revolves around Count Dracula and his reign of terror over the country of Wallachia. After the people of Wallachia accuse Dracula’s wife of being a witch and kill her, Dracula summons a Demon Army.

Trevor Belmont, a monster hunter, and Sypha Belnades, a magician, will join forces to take down Dracula and his army.

Tim Miller and David Fincher combine to create what is the most critically acclaimed American anime series in years.

It’s not exactly a series, but a collection of short animated films that explore the most popular genres like Fiction, Horror, Comedy, Fantasy, and more.

Each episode differs from the last, so we don’t have a premise to sell. However, a glimpse of the animation quality and you’ll be hooked.

More and more video games have turned into Hollywood movies, so why should anime miss out?

Arcane is based on Riot Games’ League of Legends, and the animated series got just as popular as the game. Receiving critical acclaim for storytelling, world-building, and animation quality, Arcane already has a second season in the works.

The series focuses on two sisters, Vi and Jinx, facing off against each other in a war between the rich and poor. As the city of Zaun is run over by the city of Piltover, heroes will rise and villains shall fall.

Hands down the best American anime to date is Avatar: The Last Airbender. The story, animation, voice actors, everything clicked with this animated series, unlike the trainwreck that was the live-action film.

As Aang, the Last Airbender, and the reincarnation of Avatar try to master element bending, he’ll have to stop Fire Nation from destroying the Water Kingdom, Air Nomads, and the Earth Kingdom.

With others joining Aang, the odds are improving, but the Fire Nation is strong. And the Fire Prince, Zuko, is plotting his move too.

And that’s the end of our American anime list.

The American anime library will only grow as more creators and studios jump on the bandwagon. Although, surpassing Japanese anime will take some doing.