All Titans in Attack on Titan: Size, Power, Inheritors & more 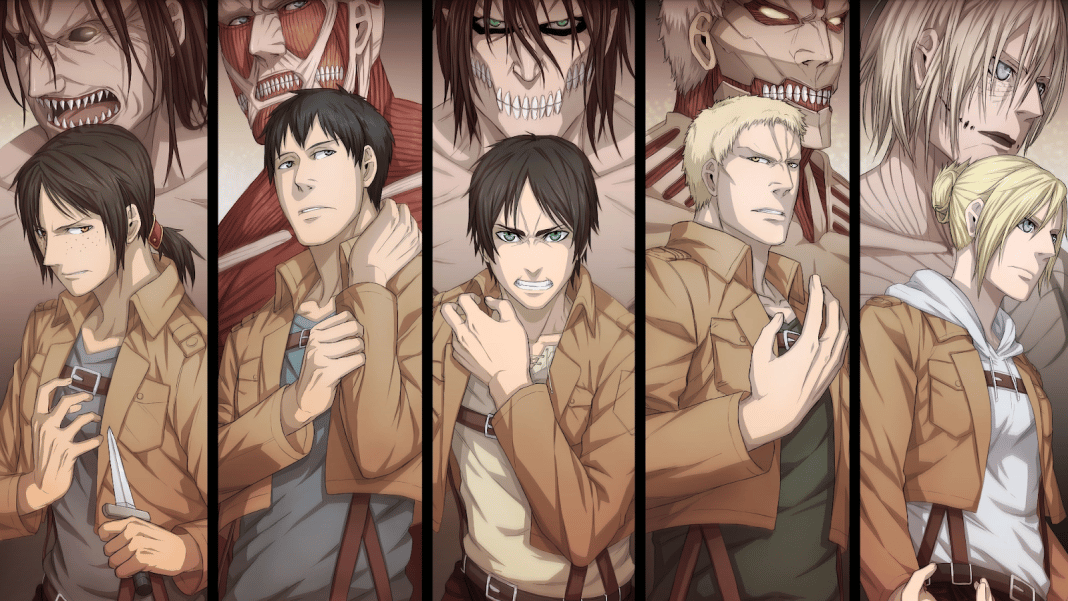 Attack on Titan is one of the most popular anime series ever made and it’s no secret why. The action-packed storyline, gripping battles, and beautiful animation have won the fans, so much so, we do have a cult following.

In this post, we’ll be taking a look at all Titans in the attack on Titan and their power. From Historia to Reiner Braun, we’ll be detailing everything you want to know. And then some more!

All Titans in Attack on Titan

In the manga series Attack on Titan, written and illustrated by Hajime Isayama, there are many different types of Titans, all of which have a human-like appearance. If you have seen AOT, you may wonder if there are different types among Titans.

I would say, you guessed it right! There are two types of Titans:

Pure Titans are mostly mindless creatures who want nothing more than to devour humans mercilessly. Among them, some Titans prefer to create more destruction instead of attacking humans.

On the other hand, Nine Titans are Titans in human disguise who can transform into intelligent and powerful Titans anytime. These Nine Titans represent the 9 powers that each nation is fighting over for decades.

These nine Titans are fragments of Ymir Fritz and have been handed down to Eldians via their ancestors.

When one Titan shifter consumes another, its abilities combine to become a new Titan, bringing the total number of Titans down to nine.

Let’s go over each of these Nine Titans in detail including their abilities!

All Types Of Titans In AOT Explained!

Pure Titans, which typically range from 2 to 15 meters in height, made up the great majority of humanoid-looking Titans observed so far.

The fact that they’re all mindless is the one thing they have in common. They would indiscriminately attack any close humans, making them easy prey. Nonetheless, they posed a threat because of their massive size, robust physique, and large population.

Among Pure Titans, some Titans are called Abnormal Titans due to their out-of-the-ordinary intelligence or behavior. In the presence of people, abnormals frequently rush on to more strategically advantageous targets.

For example, rather than attacking a small number of nearby humans, they run off to attack a high population far away.

B. The Nine Titans

The Nine Titans are 09 Titan powers that have been handed down through the Eldians for almost 2,000 years. The nine have different names and skills, but they can all change into their hereditary Titan anytime.

A human entrusted with Titan power would be able to use advanced Titan skills, such as directing regeneration to specific areas to speed up the healing process.

In addition, the Nine’s heights in Titan form vary widely, from the 4- and 5-meter Cart Titan to the 60-meter Colossal Titan and so on.

All inheritors will continue to reach these heights, but those who have two or more Titan powers will find that they can only use one of them effectively.

Now, let’s deep dive into Nine Titans and discover their powers and inheritors.

War Hammer is one of the intelligent Titans out of Nine Titans and is now in the possession of Eren Yeager.

The War Hammer Titan is capable of creating and manipulating structures formed of solidified Titan flesh, which may then be weaponized by shaping them into spikes and swords with serrated edges or worse.

Among the Nine Titans, Cart Titan is a four-legged Titan that is both incredibly swift and sturdy, allowing it to complete long missions without stopping for breaks.

Cart Titan can keep its Titanic form when clad in military armor because of its high absorption resistance, and is used in the war to great benefit.

However, when compared to the other Titans, the Cart Titan is the most vulnerable because of its weakened defenses and slower regeneration powers.

The Jaw Titan is one of the fastest and smallest Titans among the Nine Titans. With very powerful jaws and claws that could tear through practically anything.

Unlike the Attack Titan, Jaw Titan was able to break through Eren Yeager’s fortified Titan armor and the crystal shell protecting the War Hammer Titan in the series.

The Female Titan, who possesses abilities including agility, speed, and a scream intended to attract abnormal surrounding Titans, was one of the first female Nine Titans seen in the AOT series. To further fend off attackers, the Female Titan can create crystal-like armor in specific areas of the body.

Currently, Female Titan is held by Annie Leonhart, a candidate for the Eldian Warrior Order. It’s really athletic and possesses a lot of stamina. It’s not clear if this Titan always has a feminine form or if it takes on the characteristics of its owner.

The Founding Titan, also known as the Progenitor Titan and the Coordinate, was the first of the Titans to have the power to create and control others by altering the minds and bodies of the Ymir followers.

Although Eren now has the Founding Titan, it has traditionally only been used by the royal family. This Titan can create and command other Titans, change memories, and even communicate telepathically.

In an attempt to save Mikasa, Eren unwittingly used the power of the Founding Titan and is now the hire of 3 of the Nine Titans.

Beast Titan, as its name suggests looks similar to a beast and is typically taller than the other Nine Titans except for the Colossal Titan. When compared to other formidable Titans, the Beast Titan stands head and shoulders above the others.

Beast Titan is in the possession of Zeke Yeager, Eren’s half-brother who is a highly intelligent Eldian warrior and has spent years plotting the destruction of Paradis.

With just a scream, Beast Titan can transform people who have consumed his spinal fluid into pure Titans and can command other Titans as well.

Attack Titan was the first Titan in the AOT series to side with humans and smash the other Titans to save Mikasa, Armin, and the other residents of the town.

Later, it was discovered that this Titan is none other than Eren Yeager, who was instinctively transformed into one after being eaten alive by an Abnormal Titan.

Fact: Eren Yeager did not become a Titan because he was devoured by one, rather he was Injected with a Titan serum more years before the Titan attack! You have to watch AOT Season 01 to understand the whole story.

The Attack Titan was believed to have fought for freedom for many generations and was one of the Nine Titans with the ability to see through the memories of its former and prospective users.

The Attack Titan stands 15 meters tall, has a massive physique, and has no visible flesh on its jaws; its only special ability is “the power to transcend time.”

The Armored Titan was one of the formidable Nine Titans with skin armored plates over its body. As the name suggests, the unique feature of the Armored Titan was the extensive coating of plated, armor-like pieces of hardened skin shielding the Titan body.

The Titan’s armor could be employed defensively against attackers and offensively against everything in its path. However, despite its menacing appearance, the Armored Titan’s skin mostly constrained the Titan form’s speed.

The Armored Titan could only run at moderate speeds when fully armored, and it was unclear if this was due to the armor itself or to the restrictions it placed on the Titan’s movement.

Colossal Titan was the first Titan to emerge in the series, captivating audiences with its terror and off-the-chart action.

As it was one of the tallest and toughest Titans, Colossal Titan wreaked havoc in Shiganshina, where Eren, Mikasa, and Armin lived with their families in childhood.

Colossal Titan creates a large amount of energy and gusty wind explosion when the inheritor changes from human to Titan form.

It can also generate a mushroom cloud of dust and rubble which can cause great damage to its opponents. Such as the deaths of numerous Survey Corps soldiers at the Battle of Shiganshina District.

Moreover, the Colossal Titan lives up to its monstrous moniker by being so gigantic that it can knock down Wall Maria’s outer gate with a single kick.

AOT Titans – What Did You Learn So Far?

In this blog, we discussed all the Titans in detail and also discovered the truth behind their Titanic powers! Like eating one of the Nine Titans to gain control over Titanic abilities is pretty insane!

Not only that, but we also discovered that a single person can hold the powers of more than one Titan; like Eren Yeager, holding Attack Titan, Founding Titan, and the War Hammer Titan.

Here’s a bit more on Eren’s Founding Titan in case you want to dig deeper!