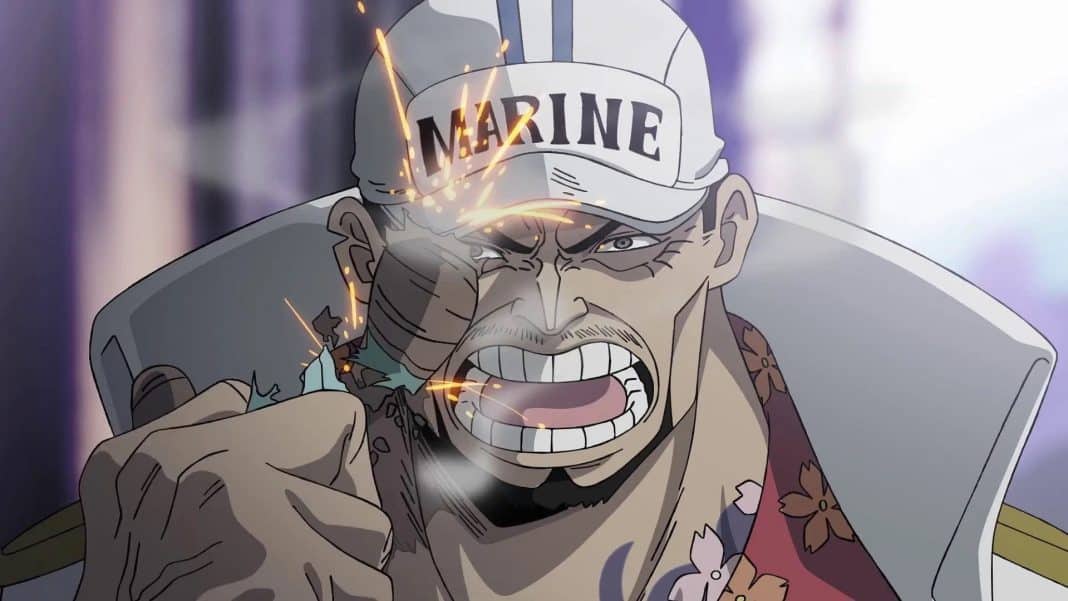 One Piece characters have grown a lot over the 1000+ episodes of the anime. We’ve seen power shifts in the New World. Old-gen pirates betrayed by their own, new Emporers getting higher bounties, and the ever-changing Yonko list are just a few examples of this.

On the other hand, Marines have a rigid system in place. It takes years to see a change in rank. But a certain appointment has gripped the whole One Piece universe.

As Fleet Admiral Sengoku retired from the highest rank in the Navy, he nominated Admiral Aokiji to be his successor. However, the World Government had other plans.

So, here are some things that you should know about Akainu in One Piece as he continues his hunt for Luffy.

Who Is Akainu in One Piece?

Akainu, whose real name is Sakazuki, was born in North Blue. He joined the Marines when he was 23 and was mentored by Zephyr.

At the start of the series, Akainu was one of three Marine Admirals but was recently promoted to Fleet Admiral after Sengoku’s retirement. That means he currently holds power to command the whole Navy of the World Government!

But even before he got the prestigious title, Akainu was a ruthless Marine who wouldn’t hesitate to kill innocents and even his comrades if needed.

Akainu has instilled his fear in the hearts of the pirates as well as his own navy. And that makes him the perfect fit for the corrupt and fascist World Government because he won’t stop at anything to bring Thorough Justice.

Akainu has one of the most dangerous Devil Fruits in One Piece. He uses the Logia-type Magu Magu no Mi fruit, which translates to Magma Magma Fruit. This gives Akainu the ability to control and create Magma.

And since it’s Logia, he can also transform his whole body into a walking Magma launcher.

The heat generated by him using Magma eliminates the possibility of a melee fight. So, Akainu and his enemies have to fight with long-range attacks mostly.

Apart from the Devil Fruit, Akainu also has great mastery over Kenbunshoku Haki.

This combo and his insane hand-to-hand combat skills make him the strongest active Marine in One Piece.

But is he the strongest character in One Piece?

Is Garp Stronger than Akainu?

Even though he doesn’t have any Devil Fruit, Garp could take on and defeat Akainu. We might have seen this happen if Sengoku had not stopped Garp at Marineford after Akainu killed Ace (Garp’s adoptive son).

Garp, nicknamed Hero of the Marines, is one of the strongest characters in all of One Piece. He was a great match for the Pirate King in his prime, and many believe that he’s very close to Sengoku in terms of strength and skill.

Plus, we all know things like willpower, experience, and skill matter more than Devil Fruit’s abilities in One Piece.

So, even though Akainu might seem stronger out of the two, it’s an even match-up, and we’re backing the Marine legend.

Is Akainu Stronger than Luffy?

Yes, Akainu is still stronger than Luffy- even with Luffy in Gear 4.

Luffy vs. Akainu is one of the hottest One Piece debates right now and one that might be settled on the Grand Line. But here’s our hot take.

Ever since Akainu killed Ace and beat the crap out of Luffy during the Marineford War, both Luffy and Akainu have changed a lot. While both have gained a lot of experience, Luffy has changed drastically regarding his fighting ability.

If we answered this question pre-time skip, Akainu is definitely the stronger one.

Although Luffy might still not be stronger than Akainu, we’d say he’s now much closer to the Fleet Admiral in terms of strength than he was earlier.

In short, Akainu vs Luffy is a much better matchup now than it was during the Marineford War.

Does Akainu Die in One Piece?

As much as fans want to see Akainu’s death because of the several heinous things he’s done, One Piece’s Sakazuki Akainu is still very much alive.

But we know exactly where these questions stem from.

After “Pops (Whitebeard) lost it” during the Marineford War watching a dead Ace lie there, he attacked Akainu. That’s when Whitebeard managed to seriously injure Admiral Akainu, landing serious damage even in his Magma form.

Whitebeard’s quake punches were so powerful that they split Marineford in half. Somehow, Akainu survived those punches, and Blackbeard finished Whitebeard for good.

Maybe if Whitebeard wasn’t so heavily injured himself early on, he might have killed Akainu then and there.

But still, Akainu’s death is all but written in stone.

There’s no way Luffy and Sabo will let Akainu live after the latter killed their brother, Ace. We might even get to see Garp vs Akainu as Garp tries to avenge Ace’s death. If Sengoku hadn’t stopped him, Garp would have killed Akainu already.

Akainu in One Piece is the most hated villain so far, and it’d be no surprise if he became the final hurdle for Luffy and Straw Hat Pirates. We just hope Oda sticks to the merciless dogmatic personality of Akainu until the very end.

Extroverted, Intuitive, Thinking, and Prospecting. These are the traits of an ENTP person. We skimmed through the ENTP anime characters' personality database and ranked...
Previous article
40+ Anime Girl PFPs: Best Anime Girl PFPs for Everyone!
Next article
Best Anime Christmas PFP to get into the Holiday Spirit